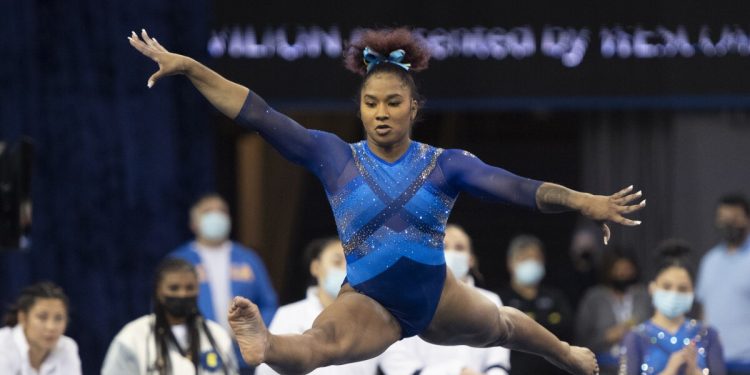 
UCLA gymnast Jordan Chiles rode the energy of the rowdy home crowd, scoring a perfect 10 on her floor routine against rival Utah.

Sekal Wright fired up fans at Pauley Pavilion with a routine set to DMX, setting the stage for Chiles’ performance.

Chiles, who helped the U.S. win silver in team competition at the Tokyo Olympics, stuck every element of a routine choreographed by Bijoya “BJ” Das and set to music by Lizzo, Normani, Doja Cat and Cardi B.

Das was focused on showcasing Chiles’ gifts during the routine.

“It’s all about being a strong and powerful woman and I think her experiences in elite and at the Olympics gave her that boost of confidence that she expressed in past interviews she was lacking for so long,” Das told The Times. “So I wanted her to just take that to the next level in her floor routine and use music that she felt inspired by, by women that were inspiring to her so it’s personal in that way. “

The perfect score during the second floor exercise routine of Chiles’ college career helped the Bruins, who have struggled with handling of racist language used by a freshman who has since left the program, post their highest marks of the season at 197.650.

However, Utah’s Grace McCallum scored a perfect 10 of her own on the uneven bars to help her team earn a of 197.750 mark, edging the Bruins by one-tenth of a point.

UCLA swept the individual all-around honors, with Chiles finishing first with a score of 39.700. She was followed by senior Norah Flatley’s career-best 39.525 and sophomore Chae Campbell’s season-high 39.500.

The Bruins’ next meet is at Stanford on Feb. 12.