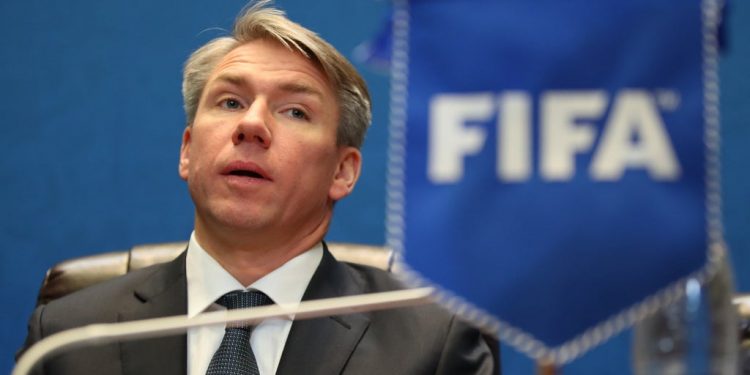 A member of the Russian delegation at the FIFA Congress said they had “every right” to be in Doha despite the country’s invasion of Ukraine.

Russian national teams and clubs have been suspended by FIFA and UEFA, but the ban does not apply to the Russian Football Union.

That has allowed Russia to declare an interest in hosting Euro 2028 or 2032 and to attend world football’s biggest annual gathering of national associations, and Alexey Sorokin of the RFU was unapologetic over his presence in Doha.

“We are not hiding. We have every right to be here,” he said.

The RFU has appealed to the Court of Arbitration for Sport against the decision to ban Russia from FIFA and UEFA competitions, although it is thought very unlikely they can now participate in the World Cup, with Poland having qualified from the play-off path which contained Russia.

“We find it kind of strange that the Russian team was not allowed to play in this (World Cup) qualification,” Sorokin added.

“It’s strange. We feel that our football players and football lovers have nothing to do with (the invasion).”

No national associations appear to have publicly expressed disagreement with Russia’s presence at the Congress, still less decided to boycott it as a result, and there was no obvious dissent when the delegation was declared present in Doha.

Sorokin was asked about the decision to declare an interest in bidding for Euro 2028 or 2032 amid the invasion, and said: “It is a long time until 2032.”

FIFA president Gianni Infantino called on Russian leader Vladimir Putin to engage in dialogue and stop the war in Ukraine.

Infantino, who received an Order of Friendship medal from Putin in 2019, a year after Russia hosted the World Cup, said in his speech to Congress: “Now that we are seeing light at the end of the tunnel (on the Covid-19 pandemic), what happens now? War. War with the fear of a global conflict.

“Innocent people are suffering and dying. We live in an aggressive world, we live in a divided world. But, as you know, I am a big believer in the power of football to bring people together and to cross cultural boundaries.

“Nelson Mandela said sport has the power to change the world. Football is the world’s sport, but at the same time we are not that naive to believe that football can solve all the problems, of course not.”

“It did not create a lasting peace. But what I want to say now is that once this terrible conflict is over, and all other conflicts around the world, hopefully football can play a small part in rebuilding relationships, in establishing peace and understanding.

“My plea to all of those who have some power, in important political positions, please stop conflicts and wars. We must engage in dialogue even with your worst enemy.

“We have to learn again to live together. This Congress is a testimony of that.”

The Real Housewives of Atlanta Season 14 Trailer: Look Who’s Back!