We are running out of good companies: list more frauds

This is not an early copy of Social Capital founder Chamath Palihapitiya’s next investor letter.

To the supporters and stakeholders,

Last year I quoted FDR: “The country demands bold, persistent experimentation . . . If it fails, admit it frankly and try another. But above all, try something.”

We did. A number of the companies we invested in were non-obvious and didn’t make much sense to our investing peers. But they made money. Not necessarily for someone who bought in at the peak and saw stocks like Clover Health fall 80 per cent. But certainly for us. Today, I want to present an even more non-obvious idea that sounds even crazier and so will be even more successful.

You may have heard that Luckin Coffee is preparing to relist on Nasdaq only 13 months after it admitted to a $300m fraud where almost half its sales were fake.

I know what you’re thinking: this could be a great candidate for our next Spac. It has an app and so it’s a tech company but it also has a menu “designed by World Barista Champion teams”. There are 1.4bn Chinese to get hooked on coffee; yes, I’m even counting the Uyghurs.

But as usual I have bigger ambitions.

We continue to find amazing companies to take public via our Spacs — such as almost-space company Virgin Galactic, former frat house SoFi and property flipper Opendoor, praised by Bank of America this week for its “inherently risky and largely untested business model”.

There is, though, a limited number of these great companies and an abundance of fantastic and fearless retail investors.

Luckin’s rapid return could open the door to an entire new investing class.

I call it the Second Chance Atonement Market. It is aimed at companies that fell foul of stupid bureaucrats or mainstream media. Now, with a more receptive audience of smart young investors, they will thrive.

It is time for a return to the public market for game-changers that vanished. Pessimists will say that these companies no longer exist. I say: Trump Media has just raised $1bn with no revenues or product. 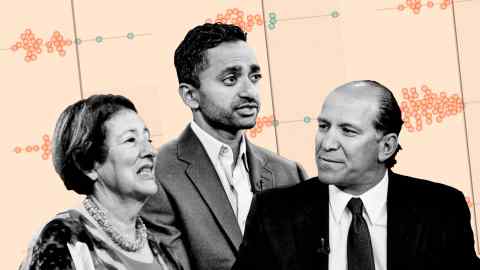 One candidate: Wirecard. Europe needs a big tech champion. Payments are hot. Here is a ready-made winner. The pitch is still good — “a data layer that also now takes new and state of the art instruments in the area of machine learning and artificial intelligence into account that additionally serves a model set of value-added service”. How can you argue with that?

The big prize is obvious: Enron. Soaring gas prices are one reason for a comeback. But it was also a web pioneer, with an 18,000-mile global fibre optic network. It had cool names for derivatives and off-balance sheet vehicles — Chewco, Jedi, the Raptors — that were ahead of their time. Redditors would love this stuff.

Finally, what wraps the investment thesis together: Arthur Andersen. Everyone is worried about the conflicts and concentration in auditing’s Big Four. Simple solution: bring back number five: unfairly bankrupted by one mistake. And let it go public. Why should a bunch of accountant “partners” keep all the profits? Investors keep losing money on audit failures — it’s time they got a piece of the upside.

Mia Goth: MaXXXine ‘Is the Best Script’ of Ti West’s A24 Horror Trilogy

30+ million Bitcoin addresses are in profit after BTC spike

Mia Goth: MaXXXine ‘Is the Best Script’ of Ti West’s A24 Horror Trilogy

30+ million Bitcoin addresses are in profit after BTC spike