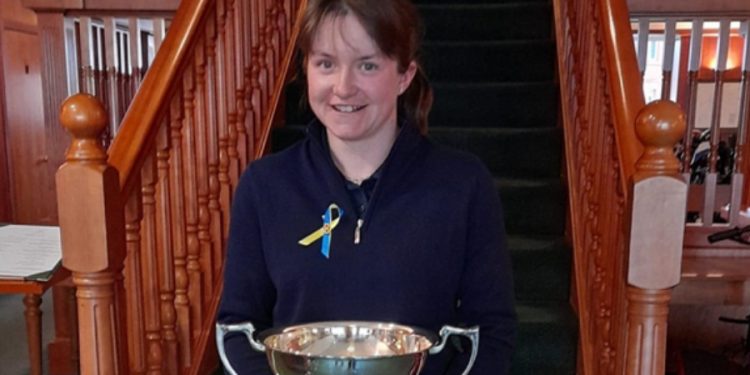 A GOLFER from West Kilbride, who plays at her home town course, has been crowned Ayrshire county’s champion lady golfer for 2022.

The competition included one round of stroke play qualifying on Monday, before the field was narrowed down to 16 competitors who would face off in knockout match play games.

Two games were played on each of Tuesday and Wednesday to decide the winner and conditions were extremely tough with high winds and a lot of rain all week.

This played into links golfer Sarah’s hands, as she used her 11 years experience, since taking up the sport as she finished up at West Kilbride Primary School, to come through the field victorious.

After the win, she told the Herald: “It was brilliant, an amazing feeling – I had been putting in a lot of work over the winter with Iain Darroch so nice to see it pay off.

“I would like to take this opportunity to thank Iain for his hard work and support over the years.

“I very much appreciate everyone who has supported me over the years on and off the golf course.”

Sarah isn’t West Kilbride’s only successful female golfer. A close friend of Louise Duncan, she has learned a lot from her village golf compatriot.

She added: “Watching what she did last year was certainly inspiring but playing with Louise growing up always gave me something to aim for and I learnt loads from watching her.

“Getting to watch the women’s open and the Curtis cup definitely gave me that push but just going out and playing six holes every now and again like we did as juniors is also brilliant.

“I would encourage any women to get into golf as there are so many avenues and opportunities from competing to socialising to other roles in official capacities. It has so much to give.”

Sarah will be hoping this is the first of many wins as her career continues and who knows, we may even see her and Louise teeing it up in the final pairing at the Open one day!

Congratulations from everyone at the Herald Sarah!

‘That was my beloved son’: family of Patrick Lyoya say police killed their son in an ‘execution’ – The Guardian