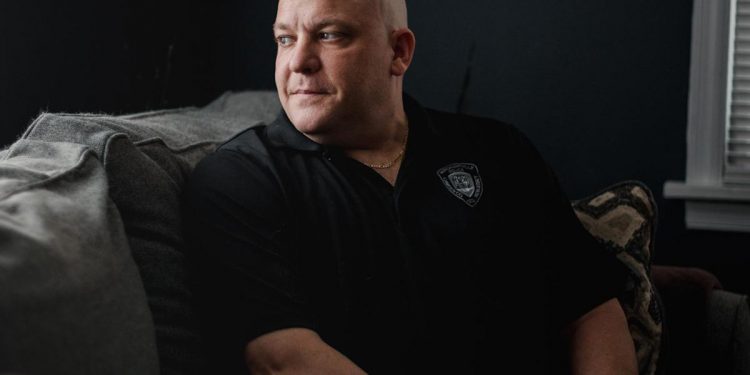 CAMDEN, N.J. — No one thought Frank Talarico Jr. was going to live. Not his doctors, his nurses or his wife, a physician assistant who works part time at the Camden, N.J., hospital where he spent 49 days fighting to survive Covid-19.

A 47-year-old police sergeant, he was not vaccinated against the coronavirus. Unconvinced of the vaccine’s merits, he figured he was young and fit enough to handle whatever illness the virus might cause.

“If it’s an eye opener for somebody — so be it,” Sergeant Talarico said recently at his home in Pennsauken, N.J., about five miles northeast of Camden. He plans to get the vaccine as soon as the doctors he credits with saving his life at Virtua Our Lady of Lourdes Hospital give him final medical clearance.

“If I was vaccinated,” he said, “I have to think I wouldn’t have gotten as sick as I did.”

Though police work inherently carries with it the possibility of violent or lethal encounters, for the last two years Covid-19 has been the leading cause of death for law enforcement officers in the United States.

When Covid vaccines were first offered in December 2020, law enforcement officers — frontline workers who, like doctors and nurses, are required to interact closely with people in crisis — were prioritized for shots that have since been proven to significantly lower the risk of serious illness and death.

But over the next year, as some police unions tried to block vaccine mandates, at least 301 police, sheriff and correction officers died of complications from Covid-19, according to the National Law Enforcement Officers Memorial, a nonprofit that tracks line-of-duty fatalities. Since January, Covid has continued to outpace other top causes of line-of-duty deaths.

“It’s not just a little bit above firearm fatalities and traffic fatalities,” said Troy Anderson, a retired Connecticut State Police sergeant who is now director of safety and wellness for the memorial. “It’s heads and shoulders above.”

“It’s unthinkable that we’re still in this place,” he added.

Before it was over, the patrol officer who was less than a year away from retirement after 24 years on the job was hospitalized twice.

After being rushed to the hospital the second time, he had a foot-long blood clot removed from his lung, a procedure that prevented certain death but caused his heart to nearly stop beating. He was placed on advanced life-support while still on the operating table. For two days a machine did the work of his heart and lungs.

It wasn’t long before his kidneys began to fail, requiring dialysis.

One of the many hard moments was the day his daughter, a 19-year-old college freshman, visited him for what they both feared could be a final goodbye. Conscious but hooked to a ventilator, Sergeant Talarico was unable to speak.

“He would try and mouth words around the breathing tube,” said Jackie Whitby, a cardiac care nurse who was also in the room. “He had tears in his eyes. She had tears in her eyes.”

About half of the 14 officers in his police department, in Merchantville, N.J., have been vaccinated, he said. The department’s chief of police did not return calls.

Sergeant Talarico said he had tried to persuade reluctant colleagues to get vaccinated.

Many of the nation’s largest police departments, including Los Angeles, New York and Newark, have required employees to be vaccinated. Correction officers in New Jersey also have been ordered to get shots or risk being fired.

In Newark, New Jersey’s largest city, nine police employees have died of Covid-19. But there have been no Covid fatalities since the city’s vaccination mandate was implemented in September after an unsuccessful legal challenge by the police and fire unions.

The last member of Newark’s Department of Public Safety to die from Covid was Richard T. McKnight, a 20-year employee who processed detainees. He was not vaccinated, said Mr. O’Hara, who spoke at the funeral.

Days after Mr. McKnight’s death in August, his wife, who was sick with Covid, also died, Mr. O’Hara said.

“Their 9-year-old daughter is left with no parents,” he said.

A 340-bed hospital, Virtua Our Lady of Lourdes was treating 26 patients for Covid the day Sergeant Talarico was first admitted. Within two weeks, 81 patients were hospitalized with the virus.

“January was the worst month of my career,” said Dr. Vivek Sailam, a cardiologist who has worked at Our Lady of Lourdes for 14 years.

As Sergeant Talarico began to slowly recover, against the odds, staff members started to rally around him, referring to him as their “miracle patient.”

“‘You get better, I’m taking you to dinner,’” Dr. Sailam told Sergeant Talarico when he came off a ventilator for the second time.

A nurse, Shawn McCullough, devised a system using a letter board that enabled Sergeant Talarico to communicate while intubated. A physical therapist, Wendy Hardesty, insisted that he be strong enough to climb the three steps into his home before he was discharged for the second time on Feb. 18.

“The mental trauma that’s been on these nurses and what they’ve witnessed — the amount of death and agony. This is what everybody needed,” Dr. Sailam said. “Everybody needed this victory.”

After being hospitalized with pneumonia for three weeks at Christmastime, Sergeant Talarico was discharged, but was so weak that his wife, Christine Lynch, set up folding chairs throughout their house — “so he could make it from a chair in the living room and rest before he went to the bathroom.”

At 5 one morning, as he struggled to breathe, Ms. Lynch called the ambulance again.

Sergeant Talarico was readmitted with the foot-long blood clot in his lungs. Known as a pulmonary embolism, it has become a common side effect of Covid-19 for hospitalized patients.

The device used to remove it has only been available since 2018, said Dr. Joseph Broudy, who said the new technology enabled him to extract the embolism largely intact.

Had that not been possible, Dr. Broudy said, “he probably would not have survived.”

Sergeant Talarico and Ms. Lynch, his second wife, had been married for less than a year when he was told in late December that he had been exposed to the virus by a colleague. Soon, the newlyweds were both sick.

Ms. Lynch, a physician assistant who was vaccinated, said she initially shared her husband’s reluctance to take the shot. Sergeant Talarico said he believed that the vaccine approval had been rushed, and he questioned its safety.

Looking back, he said he wished Ms. Lynch, 33, had “kicked his butt” to get vaccinated. Had he been older, with health risk factors other than high blood pressure, she said she would have.

Before getting sick, Sergeant Talarico said he worked out regularly, and for three years had participated in the Police Unity Tour, a three-day bicycle ride to Washington held each May to honor fallen officers as their names are added to a memorial in the capital.

“I’ve been healthy all my life,” he said. “I guess I just did have the mentality that if I do get it, I’ll be one of the ones to have it mild. And that sure wasn’t the case.”

Tom Buckley, a senior vice president at the hospital, estimated that the billable cost of treating someone as sick as Sergeant Talarico would be roughly $400,000 to $500,000; Sergeant Talarico said he had not gotten the final bill from his insurance company for the cost of his care.

About three weeks after being released from the hospital for good, Sergeant Talarico returned with bagels, pizza and a promise for the staff members who fought to keep him alive. “He told us he would get vaccinated,” said Correinne Newman, a nursing director.

The gesture brought Ms. Whitby, who had the day off but was contacted through FaceTime, to tears.

“Him being a cop and me being a nurse — we essentially put our lives on the line and put other people first,” she said.

“Having him say, ‘You know what? I’m going to get the vaccine as soon as I possibly can.’