What Does Dark Crisis Mean for the DC Universe? 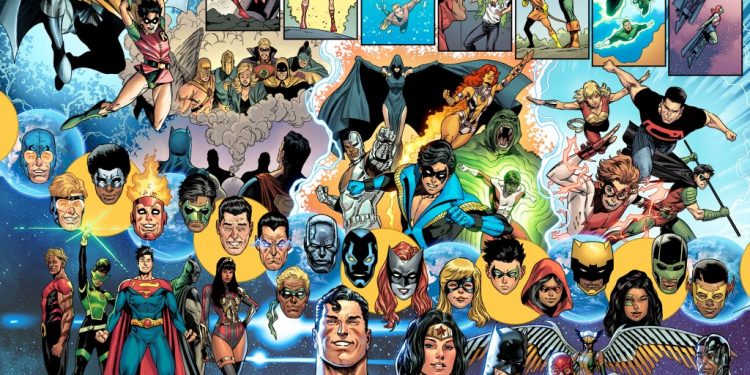 
Darkseid, killed by his failure in Final Crisis and unleashed during The Multiversity, reemerges during this time, again scheming to harness the power of the Great Darkness. But he fails, getting literally stomped by the Great Darkness’ agent on Earth 7.

That was…a lot, and I’m proud of you for sticking with it. It’s a lot of fun to describe, though, and even more fun to read through. And while Justice League Incarnate is an exercise in lining up macro continuity, Dark Crisis, for all its promises of big sweeping action and universe-shattering consequence, looks very micro in some of its continuity consequences.

The other promotional image, the two page interior spread from Dark Crisis, has an awful lot of Teen Titans on it. In fact, it’s got a quick look at the three main eras in Titans history: the Silver Age team across the top row; the Wolfman-Perez New Teen Titans crew in the center; and the Geoff Johns/Mike McKone team on the right.

And beyond that, Williamson has released the first page of the first issue, though it’s unlettered. It’s Robin taking his oath to wage war on crime from Batman in a candlelit ceremony, back from the days before Robin started being a legacy admission. Talking about it, Williamson explicitly set the concept of legacy within the greater light/dark war he’s been setting up.

All this talk of legacy feels weird for a publishing line only putting out one Titans book at the moment. Sure, Nightwing is a bestseller and critical darling, and The Flash has Wally as a lead, but those aren’t played as Titans books. What if Dark Crisis’ emphasis on legacy is setting up a big Titans push?

Williamson has been talking about legacy characters almost since he started writing for DC, and his favorite era, as he indicated to us back at the start of Infinite Frontier, is the early ’90s, when the line was explicitly about legacy heroes in a way that changed the industry. You need to look no further than Connor Hawke’s return as the greatest fighter in the DC Universe in Robin for proof of his love.

Biden and Putin to speak as Ukraine warnings mount – Reuters

Biden and Putin to speak as Ukraine warnings mount - Reuters