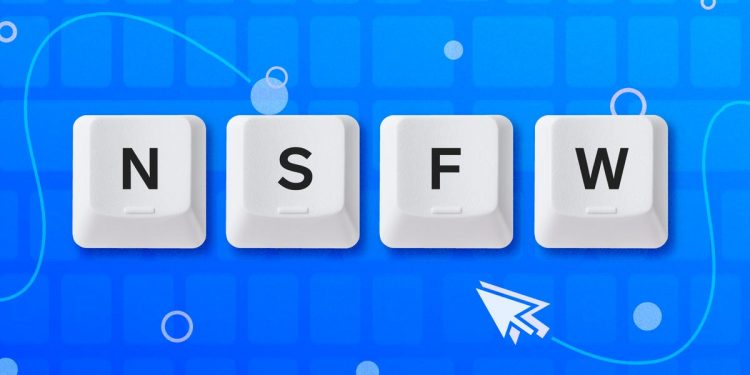 
If you’ve spent any time on social media or in forums that occasionally feature edgy or explicit content, you’ve likely encountered the acronym, NSFW, that commonly denotes such material.

NSFW stands for “not safe for work.” The acronym is a common warning for internet content considered to be inappropriate for viewing at work or in public.

A NSFW tag conveys that, unless you’re OK with risking a conversation with the HR department, you should avoid looking at this content on a work computer or in the presence of other people.

The NSFW tag began mostly as a reference to warn about sexual content, nudity, or violence, but has evolved to encompass a range of delicate and potentially triggering content for the viewer.

NSFW is often attached, in an abundance of caution, to any link or image — even one that’s contextually innocent — that might raise eyebrows. For example, a page about cleaning on Reddit might include the NSFW tag to a photo of a dirty toilet.

Speaking of Reddit, the social media site is one of the most common places you’ll see the NSFW tag. You might also see NSFW used more informally, like typed in at the top of a Facebook post, or more formally, where an entire

server or channel can be designated as NSFW.

On the internet, there are videos and images that extend beyond NSFW — explicit content that’s often more graphic and disturbing. Fortunately, there is also a “not safe for life” (NSFL) tag that provides an elevated trigger warning.

While viewing NSFW content might embarrass you or cause you to be reprimanded, NSFL images or videos have the potential to upset or severely trigger you. Some examples of NSFL content might be a video where a person’s death was captured on film, or an image that’s not violent in nature but graphic nonetheless, like medical procedures.

You will also occasionally see online content with a “safe for work” (SFW) designation. Generally, these tags are attached to posts with titles that seem NSFW in nature, but actually aren’t.

For instance, you might see a Reddit post with an image titled, “I got poison ivy in the worst possible place…” with a SFW tag, indicating the body part in the image isn’t graphic in nature and generally safe to view in the presence of others.

What Is Venmo? Venmo started...