What if everyone had to vote? Would that cure political ills? 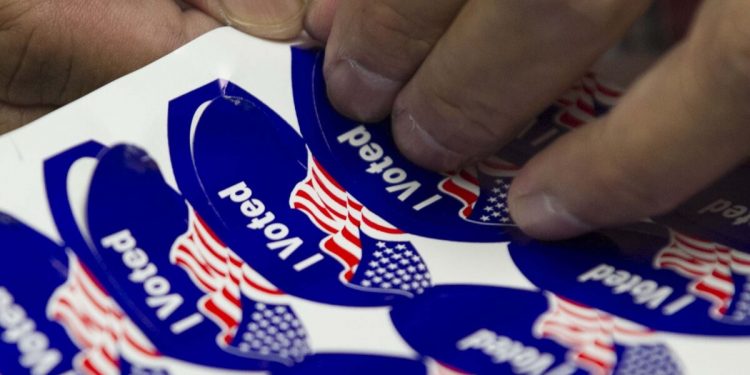 What if everyone in America had to vote?

No lame excuses like all politicians are the same, or one person’s vote really doesn’t matter, or the dog ate my ballot.

There are roughly two dozen countries requiring what is gently called “mandatory attendance at the polls” and two would-be reformers would like the United States to join those ranks, though they readily concede the odds of that happening are exceedingly steep.

“If it’s hard to get people vaccinated to save their lives, you might imagine it might be hard to get them to accept this,” said E.J. Dionne, a Washington Post columnist, senior fellow at the Brookings Institution and author of several prescriptive books on politics. Still, he said, it’s well worth trying.

His partner in advocacy, Miles Rapoport, is a longtime promoter of good-government initiatives, a liberal activist and former Connecticut secretary of state.

Together, they produced a slim volume, “100% Democracy, The Case for Universal Voting,” which makes their case for why every eligible American should have to take part in elections, from the local level to the White House. While no cure-all, the change would go a meaningful distance toward strengthening our democracy and making our politics somewhat less awful, they suggest.

“Why do we have required jury service?” Rapoport asked. “Because we want the guilt or innocence of people and the appropriate punishment to be decided by a jury of their peers. Meaning… a representative sampling of all the people.”

Why then, he went on, shouldn’t government decisions that affect our lives be based on the broadest consensus — that is the highest number of voters choosing our elected leaders — as possible?

As part of a barnstorming tour, the two recently swung by UC Berkeley, where, on an unseasonably warm afternoon, they settled into red leather chairs in a stuffy campus library to pitch an audience of roughly 25 students and academics.

Think of elections, he said, as “a fancy dinner party” with A-list, B-list and C-list guests. The A-listers are those voters who reliably show up every election and receive the overwhelming majority of attention from candidates and their campaign strategists. The B-listers are occasional voters and C-listers are the unregistered and habitually inattentive. They get table scraps.

“There is a vicious cycle there,” Dionne said, “because if the political system never reaches out to you, it is much more likely that you will not participate.”

One result of that segmentation and stratification is what the authors called “enrage to engage,” or stoking anger among a party’s most ardent supporters to ensure they turn out while, at the same, working to keep backers of the other side from voting.

Increased polarization is one insidious consequence. Candidates would behave differently, Rapoport said, if they knew every eligible voter was going to participate in an election.

“You can’t just do your messaging to gin up your base and discourage the other people’s base,” he said. “You’ve got to make an appeal to all of the voters and I think that would be extremely healthy.”

The two argued that mandatory voting would also dispense with efforts to suppress turnout, which has become a strategy in some Republican-run states.

“Our view is that making voting a civic and legal duty is the best way to defend it as a right,” Dionne said. “Because as soon as you make voting a duty, like jury duty, that everyone has to engage in, it becomes incumbent on the entire political system to make it as easy as possible.”

(As for the notion that higher turnout necessarily benefits Democrats, the two pointed to November’s election in Virginia, where a surge in turnout helped lift Republicans, including underdog Gov. Glenn Youngkin, to victory).

On to the details.

The two propose a $20 fine for those who fail to cast a ballot, a manner of “light touch enforcement” they said has proven more effective in Australia, among other countries with mandatory voting laws, than heavier-handed tactics.

Elections would include a none-of-the-above option, sparing voters from having to choose one or another truly off-putting candidate.

Those with genuinely sincere reasons for refusing to vote, such as religious belief, could claim “conscientious objector” status and do some form of community service to make up for their election day absence.

Questions from the audience were friendly, if somewhat skeptical. They mainly ran along the lines of how to force people to vote when, during a pandemic that has killed nearly 1 million Americans, so many pitch a fit over covering their nose and mouth to help stem the spread of the coronavirus.

Their answer: Start small. Try it at the local, then state levels before working up to a national voting requirement.

Admittedly, the concept of mandatory voting seems radical, Dionne said. But so, too, did many things Americans now take for granted, including the rights of women and Black Americans to vote, as well as the cherished right to cast a secret ballot. (It was only around the 1890s that the practice came into widespread use.)

“At the beginning of our republic, only white men with property could vote,” Dionne noted. “It was a radical notion to keep expanding suffrage, but we did and it was good for democracy. We think our proposal is the next logical step in our great national tradition of expanding access to and participation for democracy.”

The idea is to make people work a little harder at being a good citizen and force politicians to quit dividing to conquer. That’s got my vote.

One in an occasional series on proposals to fix our politics and strengthen democracy.

The coastal grandmother: easy, breezy, laid-back yet immaculate – are you ready for the latest on-trend lifestyle? | Life and style

The coastal grandmother: easy, breezy, laid-back yet immaculate – are you ready for the latest on-trend lifestyle? | Life and style