What is a triple-double in basketball as Fred VanVleet secures feat? 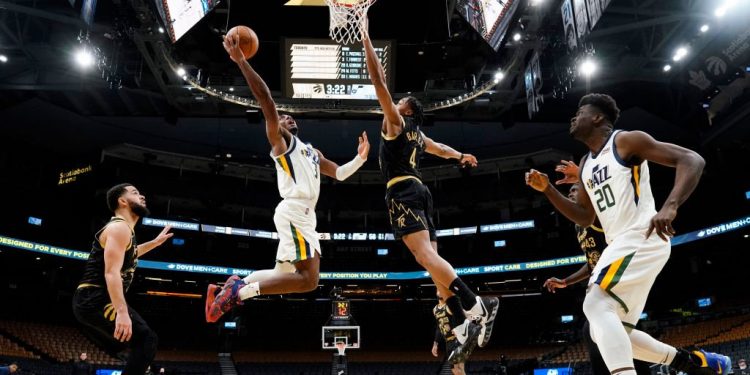 VanVleet, who was signed by the Raptors in 2016 after going undrafted, has become a key part of Nick Nurse’s playing staff.

The Raptors were on a four game winning streak prior to Saturday’s visit of the Utah Jazz to Scotiabank Arena.

A strong third quarter, where they racked up 45 points to go into the lead, before seeing out the fourth quarter.

In the process of extending their record to 19-17 for the season, VanVleet scored a triple-double.

But what actually is a triple-double in basketball?

A basketball triple-double occurs when a player scores at least 10 points in any of the five major scoring categories in any single game.

Because a player, such as Fred VanVleet, scored ten 10 points in three areas, it is known as the triple-double in basketball.

A double-double is much more common than a triple-double.

Players such as Russell Westbrook, Magic Johnson and LeBron James all have over 100 triple-doubles in the regular season in their careers.

How did Fred VanVleet get it?

Over the course of the game against the Jazz, VanVleet scored 37 points for the Raptors.

That is a season-high for the Illinois-basketball native.

VanVleet secured his triple-double with 10 assists and 10 rebounds.

It was his first career triple-double, although he still has some way to go to top Westbrook’s regular season record of 193 – as of January 8th, 2022.

The win for the Raptors placed them seventh in the Eastern Conference as the season nears the halfway mark.