What is Dale Earnhardt Jr’s net worth as NASCAR legend inducted into Hall of Fame? 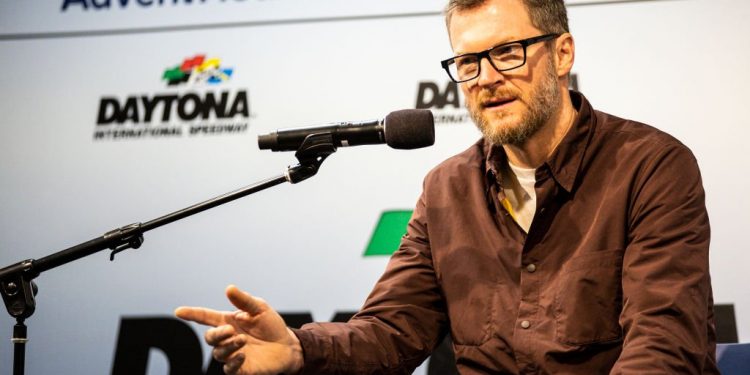 
Dale Earnhardt Jr remains one of the most popular NASCAR drivers, but as he prepares to be inducted into the Hall of Fame – what is his net worth in 2022? How many times did he win in NASCAR as a driver?

Even though he stepped back from the Cup Series at the end of 2017, Dale Earnhardt Jr remains one of the most popular, respected and wealthy figures in NASCAR.

Whether it be through his work as a NBC commentator or through his content production company Dirty Mo Media, when Earnhardt Jr talks, people still listen.

The winner of NASCAR’s most popular driver 15 times – on the trot -, Earnhardt Jr built on the legacy left behind by his father, Dale Earnhardt Sr.

Dale Earnhardt Jr will be inducted into the NASCAR Hall of Fame on January 21st, 2021, but what is his net worth?

And how many races did he win in his NASCAR career?

Dale Earnhardt Jr’s current net worth in 2022 is estimated to be around the $300 million mark.

During his Cup career which lasted from 1999 to 2017, Earnhardt Jr earned race earnings steadily rose, peaking around $5.5 million per season.

In addition, with one of the most marketable surnames in motorsport – think Mick Schumacher in F1 these days – Earnhardt Jr was never short of finding sponsorships and endorsements.

In the latter half of his career, he regularly over $20 million per season.

Celebrity Net Worth estimates that, when he retired from Cup, Dale Earnhardt Jr’s net worth was around the $410 million mark.

By comparison, at the time of his death in the 2001 Daytona 500, Dale Earnhardt Sr’s net worth was around $70 million.

How many races did he win?

He made his Cup Series debut at Charlotte in 1999, going full-time in 2000 at the team Dale Sr owned – Dale Earnhardt Incorporated – DEI.

He would stay until the end of 2007, before departing to Hendrick to form a super-team alongside Jimmie Johnson and Jeff Gordon.

The 47-year-old could never quite win a Cup championship – third being his best finish in the standings in 2003.

Earnhardt Jr also picked up 24 wins in the XFinity Series – in which he continues to race once per year.

In the first race at the superspeedway since his father was killed in the 500, Earnhardt Jr carved through the field late on to take an emotional victory in one of NASCAR’s most iconic finishes of all-time.

In other news, Who is Nicole Hocking? Luke Combs and wife expecting first child

Preventative Measures To Avoid Getting Into a Car Accident

Preventative Measures To Avoid Getting Into a Car Accident