What is the salary of referees in the NFL – how does it compare to other sports? 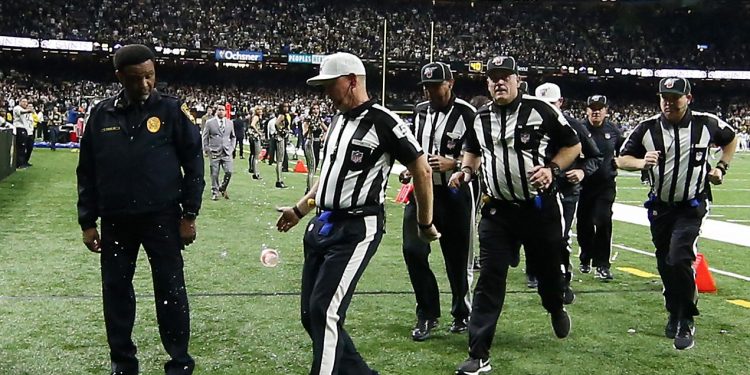 
The most important person at a football game – the referee’s word is usually final on controversial calls, but what is the salary for referees in the NFL? How does the figure compare to other sports, such as the NBA?

Depending on the outcome of the match involving your team, they are usually a hero who got every decision right, or doesn’t know what they’re doing as your team lost.

There is little in-between these two factions.

They are some of the most scrutinised people at a game, and are paid well to get the big call right, every time.

But what exactly is the salary for a referee in the NFL? How much are they paid, and how does it compare to other sports?

Referees in the NFL are well-rewarded for their work, with a figure of around $550,000 as their salary – for the regular and post seasons combined.

The NFL operates a system whereby each referee is awarded a basic salary with which they start.

it is proportional to the experience and accuracy of any one referee.

This is paid in conjunction with a game-by-game fee for actually turning up and calling the game.

For example, legendary former referee Walt Coleman banked a starting salary of over $200,000.

His game-by-game fee then topped his salary up during his career.

For the post season, the game-by-game fee is bumped to reflect the importance of the playoffs.

The NFL does not officially release the salary figures for referees.

There is a structure whereby the more accurate a referee is in their calls and judgements, the higher the profile of games they will receive.

Of course, the biggest honour is the Super Bowl.

The highest ranked referee and officials in each position are selected for that game – meaning a referee can call multiple Super Bowls.

How does it compare to other sports?

There is one big difference that should be noted when comparing NFL referee salaries with other sports.

NFL referees are not officials, per se.

The referee is the ultimate figure in charge, with a team of officials behind them.

The salary of NFL referees and officials is vastly different.

Senior NBA referees are in a similar ballpark to their NFL cousins.

The more experienced the referee, the higher their salary.

However, the average salary for officials in the NBA is considerably higher than in the NFL.

Other sports such as the MLB and NHL are somewhere in the middle of the NFL/NBA.