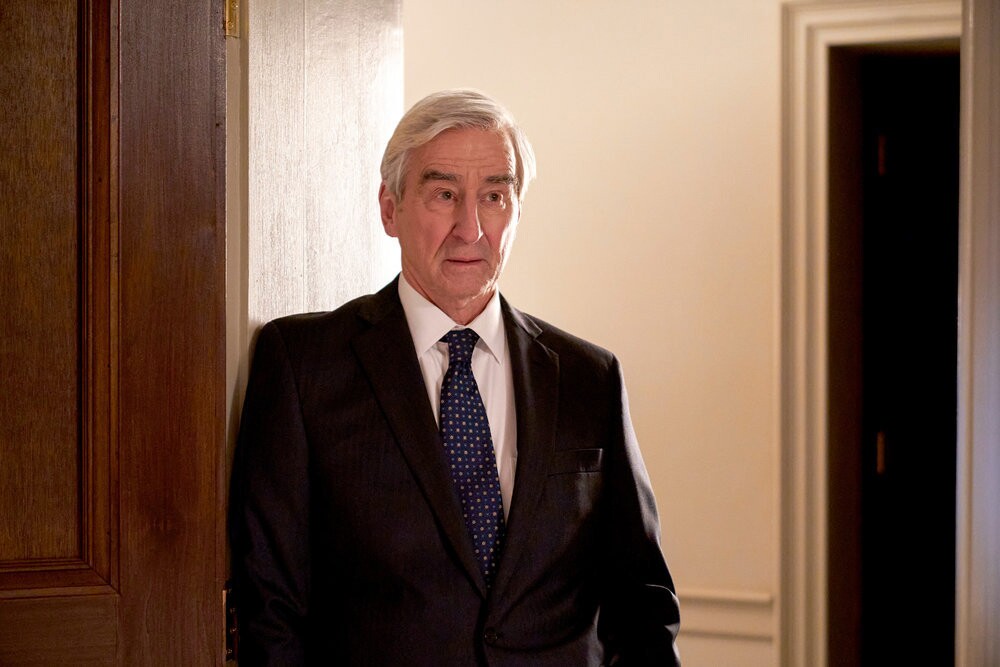 The skiers, skaters, snowboarders and curlers say bye-bye to Beijing at the closing ceremonies of the “2022 Winter Olympics.” 5 p.m. NBC

The four-part docuseries “LBJ: Triumph and Tragedy” recalls the life and turbulent times of the 36th U.S. president. 6 and 7 p.m. CNN; also Monday

Phileas Fogg (David Tennant) has the finish line in his sights in the finale of “Around the World in 80 Days” on “Masterpiece.” 8 p.m. KOCE

“C’mon in, the water’s fine” is an invitation you should probably decline in the new TV movie “Swim Instructor Nightmare.” 8 p.m. Lifetime

“The Walking Dead” comes shuffling in with the middle section of its three-part 11th and final season. 9 p.m. AMC

It’s a nice place to visit, but once you do you’re stuck there with no escape in the new sci-fi/horror drama “From.” 9 p.m. Epix

Allegations of sexual abuse made against a once-beloved comedian intensify in the conclusion of “We Need to Talk About Cosby.” 10 p.m. Showtime

Get a front row seat to some of history’s most pivotal moments in the new series “I Was There.” Theo E.J. Wilson hosts. 10:30 p.m. History Channel

The search for justice in the murder of a Black teen in London in 1993 is recalled in the miniseries “Conviction: The Case of Stephen Lawrence.” With Steve Coogan. Anytime, Acorn TV

Dangerous stunts? Yes. The old song and dance? Not so much in the new spinoff “America’s Got Talent: Extreme.” Terry Crews hosts. 8 p.m. NBC

Weigh anchor: “Below Deck Sailing Yacht” is back for a third season. 8 p.m. Bravo

“All American’s” Geffri Maya matriculates at a historically Black university in Atlanta in the new spinoff “All American: Homecoming.” 9 p.m. the CW

A criminal mastermind (“Homeland’s” Morena Baccarin) who’s in federal custody still has a few cards to play in the new action thriller “The Endgame.” 10 p.m. NBC

A program that helps female parolees stay sober, find work and reunite with their families is explored in the documentary “Apart” on “Independent Lens.” 10 p.m. KOCE

The new docuseries “Race: Bubba Wallace” rides with the top Black driver in NASCAR during a time of change. Anytime, Netflix

The top three contestants face off in the finals of the “Jeopardy! National College Championship.” Mayim Bialik hosts. 8 p.m. ABC

Broadway’s Nathan Lane and Leslie Odom Jr. give their regards to their respective ancestors on a new “Finding Your Roots With Henry Louis Gates, Jr.” 8 p.m. KOCE

Black women speak candidly about how they are perceived by society and portrayed in the media in Jennifer Holness’ powerful 2021 documentary “Subjects of Desire.” 8 p.m. Starz

Need a lift? The remaining contestants try to re-create the famous move from the blockbuster 1987 film in the finale of “The Real Dirty Dancing.” 9 p.m. Fox

“Fannie Lou Hamer’s America: An America ReFramed Special” pays tribute to the indomitable Black activist who became a leader of the civil rights movement in the 1960s. 9 p.m. KOCE

Say it loud: A beloved animated sitcom gets a reboot with “The Proud Family: Louder and Prouder.” With Kyla Pratt and Cedric the Entertainer. Anytime, Disney+

Mustangs, Appaloosas, etc. are the mane attraction in the episode “American Horses” on a new “Nature.” 8 p.m. KOCE

Jeffrey Wright, “Miss Juneteenth’s” Nicole Beharie and others give voice to the words of a legendary Black abolitionist in the special “Frederick Douglass: In Five Speeches.” 9 p.m. HBO

Graham Nash, the N in CSN&Y, performs on a new edition of the concert series “Skyville Live.” 10 p.m. CMT

Hellur! Tyler Perry reprises his role as the opinionated matriarch of a large Black family in the 2022 comedy “Tyler Perry’s A Madea Homecoming.” Anytime, Netflix

One or more strangers stranded at a rest stop during a snowstorm might just be a kidnapper in the 2022 thriller “No Exit.” Anytime, Hulu

Lt. Dangle (Thomas Lennon) and the gang report for duty in new episodes of the “Cops”-style spoof “Reno 911!” Anytime, Roku

On they sweep, with threshing oar in “Vikings: Valhalla,” a sequel to the 2013-20 historical drama. Anytime, Netflix

A heavily-armed militia tries to take over the whole goshdurn country in the 2021 dystopian thriller “American Insurrection.” 9 p.m. Showtime

Tiffany Haddish, Lil Nas X and Megan Thee Stallion are among the nominees for Entertainer of the Year at the “53rd Annual NAACP Image Awards.” 8 p.m. BET

A woman inherits an Italian restaurant and hooks up with a hunky chef in the new TV movie “Welcome to Mama’s.” 8 p.m. Hallmark Channel

A New Hampshire teen undergoes a terrifying ordeal in the fact-based TV movie “Girl in the Shed: The Kidnapping of Abby Hernandez.” 8 p.m. Lifetime

What To Watch As Keller Williams’ Family Reunion Unfolds This Week