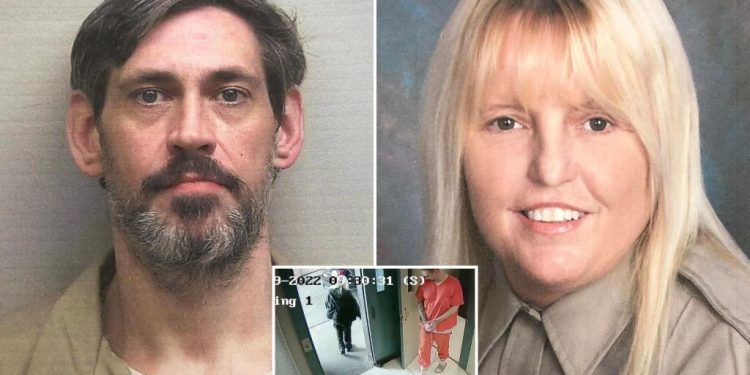 ALABAMA — The road that led capital murder suspect Casey Cole White to his escape from an Alabama jail started almost a decade ago after a wild, two-state crime spree on a Tuesday night that involved a kidnapping, an armed robbery and a shooting that left a family dog dead.

For nearly a week, the 38-year-old has been on the lam after he apparently absconded from the Lauderdale County jail in Florence on Friday morning with former assistant director of corrections Vicky White, 56.

But the events that led up to his well-planned escape offer a few clues into how, and why, the plot was hatched.

Using information gleaned from court documents, public records and interviews with investigators, The Post has pieced together a timeline of everything that’s happened in the bizarre saga so far.

Here’s what we know:

Casey, then 32, shows up to his ex-girlfriend’s home in Athens armed with a gun in each hand – a .380 caliber handgun and a .40-caliber handgun — after he finds out she may have a new flame.

Casey, who previously did time for a slew of domestic violence incidents, bursts into the home where the woman lived with her two children and holds two other residents at gunpoint as the woman flees out the back door.

The ex runs to a neighbor’s house — but the career criminal chases after her, firing at her numerous times, while two other residents escape out a bathroom window. The woman’s children were in the basement during the altercation and were physically unharmed.

As Casey bolts from the location, he’s worried the other residents in the home are armed so he fires his gun multiple times as he runs out the front door, shooting and killing the family dog, Missy Britches, in the process.

Casey heads to the 19000 block of Looney Road, about two miles from his ex’s house, and goes to a man’s door to rob him at gunpoint. When the man says he has no money, Casey grabs his keys and takes off in the victim’s Ford Explorer.

Casey drives about 20 miles north to the Tennessee Welcome Center on I-65 and attempts to hijack a truck driver. The man tells police Casey had two handguns, jumped into the cab of his 18-wheeler and snarled: “You’re going to drive me.”

The trucker refuses and barricades himself in his sleeper compartment.

Casey jumps out of the 18-wheeler, runs across the parking lot and approaches a Kentucky woman who was parked at the welcome center. When she refuses to open her car door, Casey fires at her vehicle multiple times, striking her once in the left arm. The woman survives.

Casey drives another 20 miles north on I-65 to a Pilot Travel Center in Cornersville, Tennessee where he hijacks a white 2012 Lincoln MKZ at gunpoint. The Ford Explorer that White had stolen on Looney Road was found ditched at the gas station.

Casey makes off with the stolen ride and speeds 30 or so miles toward Alabama where he is spotted by a Limestone County deputy headed south on I-65 doing more than 100 mph. A high-speed car chase ensues.

Deputies chase Casey back to Athens, where he gets off at US 31 and drives into a ditch across the street from the Swan Creek Mobile Home Park.

As officers surround the car, Casey gets out of the vehicle and puts a gun to his head, threatening to shoot himself and the officers unless he could speak with Limestone County Sheriff Mike Blakely.

Video of the incident, obtained by The News Courier, shows Deputy Casey Foxworthy offering the suspect chewing tobacco and a Sun Drop soda as he promised that the sheriff was on his way.

He later tells officers that he had intended to kill his ex-girlfriend and have police kill him. He says his only regret was that neither took place and if he is released, he will kill his ex.

Casey is booked at the Limestone County Jail where he stays until his trial for the crime spree. He’s facing a slew of charges, including attempted murder, kidnapping, burglary and animal cruelty.

Casey is indicted for the crime spree. His trial takes another three years to begin.

A jury finds Casey guilty of the charges.

Casey is brought to the Williamson E. Donaldson Correctional Facility in Bessemer, about two hours south of Limestone County.

Casey is sentenced to 75 years in prison for the crime spree. His ex-girlfriend wrote a heart-wrenching victim impact statement saying his attempt to murder her “broke me to my core” and “ripped my spirit from within.”

“That one night stopped my soul and changed my life forever. He took away all peace I had ever know,” the woman says.

“My 4-year-old son woke up to a blood covered floor with someone he didn’t know carrying him outside. He has dealt with nightmares since that night. He was so young at that time but still recalls details of ‘the red stuff!’” she continues.

The woman also mentions the family dog Missy Britches and describes how much her daughter loved her.

“Missy was a brave and kind soul and we miss her dearly,” she says.

About a month and a half after Casey was brought to the Donaldson prison, he files an appeal to overturn his conviction and asks for a new trial. He is just a few years into his 75-year sentence and will be over 100-years-old by the time he is released.

Casey’s appeal is rejected. Decades of hard time at a maximum security prison stare the then 35-year-old in the face.

About one year after Casey’s appeal is rejected, he pens a letter to Lt. Brad Potts of the Lauderdale County Sheriff’s office allegedly confessing to the murder of Connie Ridgeway, 58, who was stabbed to death in her home on Oct. 23, 2015 following a home invasion.

Ridgeway was killed about a month and a half before Casey’s crime spree.

Potts, one of the lead investigators in the case, claims that Casey said he was paid to murder Ridgeway and then provided information about the crime that had never before been made public.

Casey’s mother Connie White claims that Casey didn’t kill Ridgeway — he just wanted to get back to Lauderdale County lockup.

“The only reason he came out to Lauderdale County was to get out of the prison he was in,” Connie told The Post on Tuesday evening.

“He wrote a letter to say that he murdered that woman but he didn’t really murder her, he just done that to get back up here. … He just wanted to be out of that prison because it was so bad and there was no food.”

She told The Post she doesn’t know who Vicky is but did say that Casey had a “pen pal” that he’d been keeping in touch with.

Casey is transferred to the Lauderdale County jail so police could interrogate him about the letter he wrote and attempt to corroborate his statement. For nearly five years, Ridgeway’s murder had remained unsolved. Casey later confesses to the murder again to an investigator.

Casey stays at the Lauderdale County jail for about three months where investigators believe he first met Vicky, who worked at the facility, and developed a “special relationship” with her. Vicky’s primary duty is to transport inmates.

Casey is arraigned on murder charges for Ridgeway’s death.

Casey is transported back to the Donaldson prison after jailhouse staffers learn he’d allegedly obtained a shank and was planning an escape. A judge orders his immediate removal from the facility.

The prosecutor said the Donaldson prison, which is a maximum security facility, was better equipped to handle a detainee like Casey.

While Casey is at the Donaldson lockup, he keeps in touch with Vicky by phone and the two communicate numerous times.

Casey returns to the Lauderdale County jail so he can undergo a mental health evaluation, which is ordered by his defense team. He ends up staying about four months after he had to undergo quarantine for COVID-19.

Casey goes back to the Donaldson prison. His communications with Vicky continue.

Casey returns to the Lauderdale County jail following a legal battle between his defense team and prosecutors.

Casey’s attorneys needs to review discovery files with him but brass at the Donaldson facility forbid them from entering with the hard drive.

Vicky sells her Lexington home for $95,550. Sometime prior to Casey’s escape, she purchases a 2007 orange Ford Edge.

Vicky files her retirement paperwork with Lauderdale County and said her last day of work will be the following day after nearly 17 years with the department.

A citizen spots a suspicious looking car at the Florence Square shopping center parked within a row of vehicles for sale. He finds it odd that the car doesn’t have any signs advertising its price and later reports it to police after learning of the escape.

Investigators soon determine this was the car Vicky purchased sometime prior to the escape.

Vicky pulls her sheriff’s cruiser into the Lauderdale County jail sally port and heads inside to get Casey. She had told coworkers that he had a mental health evaluation scheduled at the courthouse — but no such appointment was ever made.

Casey, wearing an orange jumpsuit with shackles on his feet and hands, is seen walking out of the jail and getting into the backseat of Vicky’s sheriff’s cruiser. They pull out seconds later.

Vicky’s sheriff’s cruiser is spotted driving through Florence near the intersection of Cox Creek Parkway and Huntsville Road, about four miles, or a 10-minute drive, from the jail.

Vicky ditches her sheriff’s cruiser at the Florence Square shopping center, where the Ford Edge was parked, and is believed to have fled in the conspicuous vehicle.

Investigators realize that Vicky is missing after they confirm she never returned to the jail and repeated calls to her phone go straight to voicemail.

The US Marshals Service offers a $10,000 reward for information leading to Casey’s capture.

A warrant is issued for Vicky’s arrest for permitting or facilitating escape in the first degree.

“We know she participated, whether she did that willingly or if she was coerced, threatened somehow to participate in the case, not really sure. We know for sure she did participate,” Lauderdale County Sheriff Rick Singleton says.

The US Marshal’s Service offers an additional $5,000 reward for Vicky’s capture, bringing the total reward money to $15,000.