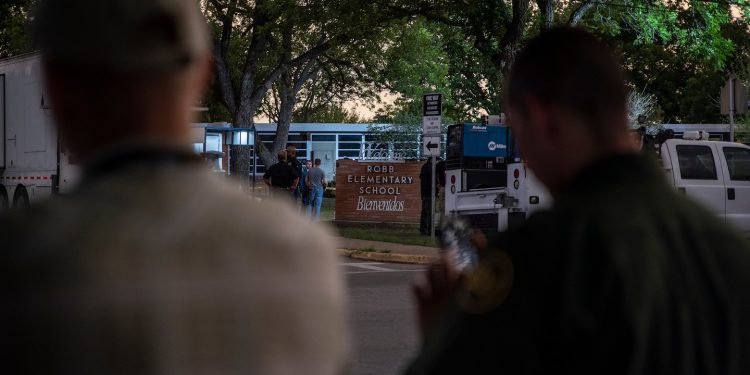 Mireles, an educator for 17 years, taught fourth graders at Robb Elementary School, according to her aunt, Lydia Martinez Delgado, who confirmed her niece was among those slain. Delgado said her nephew, Ruben Ruiz, was a police officer with the Uvalde school district and was married to Mireles. The couple’s daughter recently graduated from college, Delgado said.

“Welcome to the 4th grade! We have a wonderful year ahead of us!,” wrote Mireles on the Robb Elementary web site. “I have a supportive, fun, and loving family, “ she added. “I love running, hiking, and now you just might see me riding a bike!!”

Delgado said Mireles was cheerful and active, and recalled a time she got up before sunrise with other relatives for a hike during a family gathering. “She did all she could to live a long life, and here it was cut short,” Delgado said in a phone interview early Wednesday.

Audrey Garcia said she will never forget the attention Mireles paid to her daughter Gabby, now 23, when she was in third grade.

“My daughter has Down syndrome, and she was one of the first students at that time to be included in a regular classroom,” said Garcia, who now lives in San Antonio. “Ms. Mireles always went above and beyond. She never saw Gabby as having less potential than any of the other students.”

On Tuesday, Garcia posted a photo on Twitter of her daughter and Mireles that she said demonstrated the teacher’s dedication. Garcia said she last heard from Mireles about two years ago, after a local television station did a story on her daughter’s graduation from high school and her new jewelry business. Mireles would often reach out around Christmas, Garcia said, because Gabby had given her an ornament as a gift.

“She would say that she always thought about Gabby when she put up her Christmas tree,” Garcia said. “After all those years, she still cared about Gabby as a student. I just want everyone to know what kind of person she was and what kind of educator she was. I don’t want her to be forgotten.”

Russia is now exposed to a historic debt default: Heres what happens next - CNBC