Wheely wild: Discovering the joys of Croatia on a ‘cycling cruise’

After doggedly pedalling uphill for what seems like a lifetime with only the sound of my own gasping breaths for company, I’m suddenly aware of a ripple of applause and shouts of encouragement.

Looking up in surprise, I see my cycling buddies, who’ve already arrived at the crest of this monster mountain (OK, it’s a hill, but has assumed Everest-like proportions for me) are standing at the roadside, cheering me on for the final stretch.

It’s a heart-warming touch that makes the climax of the winding seven-mile climb up 1,400ft on the Croatian isle of Hvar all the sweeter — especially when I survey the magnificent views.

Even better is the sprint down the other side. ‘It’s not a race,’ calls our cycling guide Vania as we speed like demons, relishing this exhilarating ride into the chi-chi port town, also called Hvar, to rejoin our three-masted motor yacht Princeza Diana. 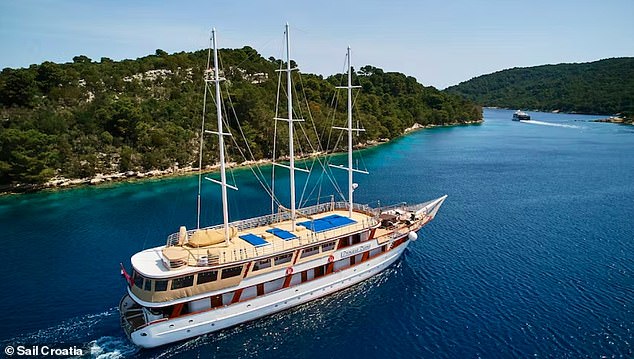 We are partway through a week-long cycling cruise weaving across the extraordinarily pretty Dalmatian islands, scattered like precious emeralds in the Adriatic Sea.

There are 32 of us, mainly North Americans, a handful of Aussies and about eight Brits — most in our 50s and 60s. What binds us is our enthusiasm and experience of cycling. This is no trip for novices.

Princeza Diana is a cosy haven with 16 traditionally furnished cabins (ours has bunkbeds and a double, plus an impressively spacious ensuite shower), plenty of sunbathing space and a bubbling hot tub — just the place to soothe aching muscles.

Shared tables in the dining salon and bar add to the sociable feel of the trip as we gather for decent breakfasts of fresh fruit, eggs and cheese, plus set three-course lunches, where the choice (delicious soups, grilled fish and pasta) and standard is more variable. 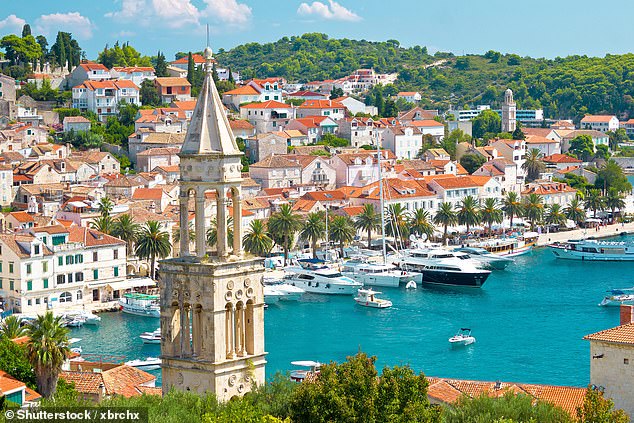 The ride into the chi-chi port town of Hvar (above) is ‘exhilarating’, Sara reveals 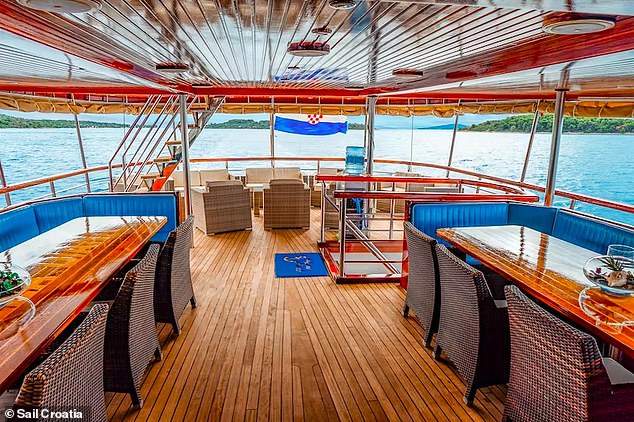 Princeza Diana, above, is a ‘cosy haven’ with 16 traditionally furnished cabins

Our itinerary — one of four offered by Sail Croatia, involving varying levels of difficulty — is the toughest thanks to gravity-defying hills and daily rides of up to 30 miles long.

No wonder half the group opt for e-bikes, though I resist this. Yet it’s something I occasionally regret, especially during teeth-gritting climbs when the e-bikers glide effortlessly past, relaxed and barely breaking a sweat.

But it’s not all hardcore hills. There are glorious meanders along deserted coastal roads that unlock incredible panoramas, and forays inland along country tracks through grape-heavy vineyards.

The sleepy villages we pass make great coffee stops, and their honey-stone houses with distinctive ochre roofs hint at their Venetian heritage.

One of the most relaxing morning rides is on Mljet, Croatia’s most heavily forested island, which is protected on its western side by a national park. 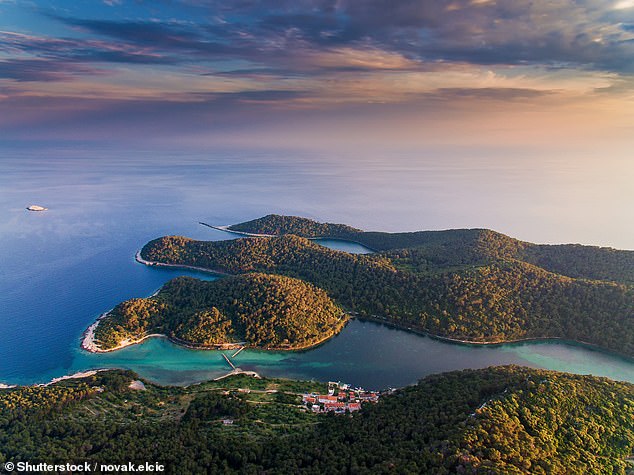 Sara says that one of the most ‘relaxing’ bike rides of the trip was on the forested island of Mljet, above 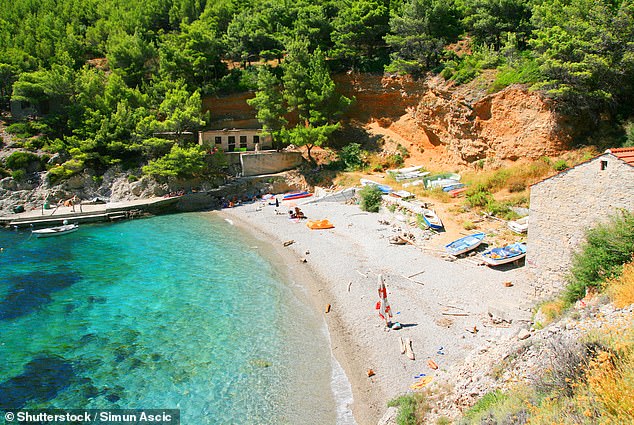 While on Mljet (above), some of Sara’s fellow cruisegoers opted to take dips in the Adriatic’s aquamarine waters

As we follow the empty tracks, Vania points out a 12th-century former Benedictine monastery on the tiny island of St Mary. Parts of the Romanesque complex and its church are open all year round. There is also a cafe.

It is reached by a free boat service which collects people at the landing spot after they wave the handily placed flag.

Further along, we ride over a pretty humpback bridge, built to replace the one demolished by President Tito, ruler of the former Yugoslavia (of which Croatia was a part), so that he could sail his yacht through. We head out on our bikes once, if not twice, a day, though it’s not compulsory. Some opt to take walks or go for dips in the Adriatic’s aquamarine waters instead. 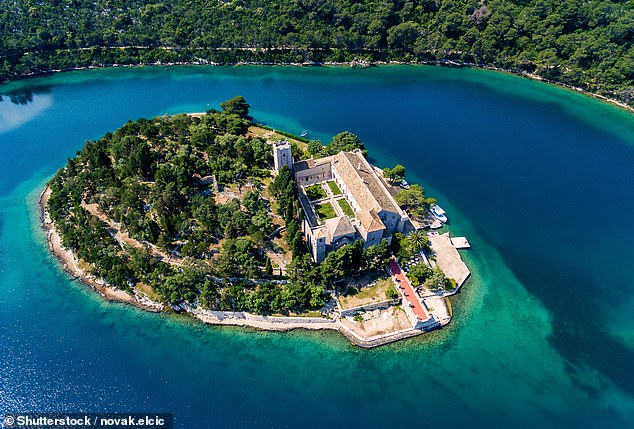 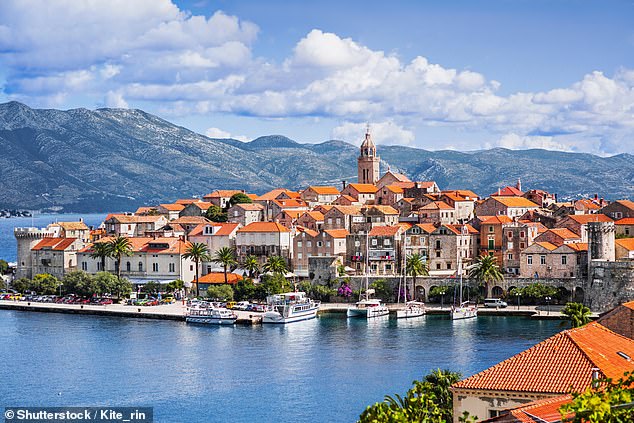 Sara swaps her bicycle for an e-bike to tour around the charming island of Korcula. Above is the isle’s Korcula town 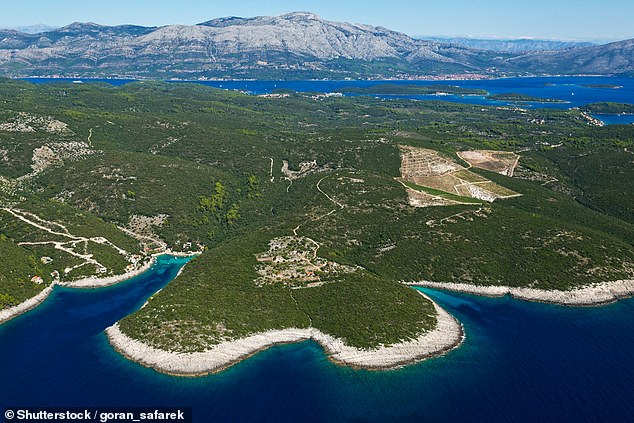 With daytime temperatures hovering around 20c, and a mix of sunshine and showers, conditions are perfect on most days.

As the cruise is half-board, we hop ashore each evening armed with recommendations for the best dining spots from our guide Nina. We also hunt for foreign exchanges, as Princeza Diana runs a cash-only system.

Arriving at the charming island of Korcula, my body is still aching from the previous day’s killer hill and my legs feel like leaden weights. I can’t face getting back in the saddle, so persuade an e-biker to swap for the day.

What an inspired move it proves to be, as this powered cycle propels me along and I fly up the hills like a bird, feeling a tad guilty as I pass my puffing companions.

I can’t help thinking that I’m cheating, but I really don’t care. As the saying goes: If you can’t beat ’em, join ’em.