When does it start?, how to watch, Tai Tuivasa vs Derrick Lewis, preview, Dana White, full card, PPV 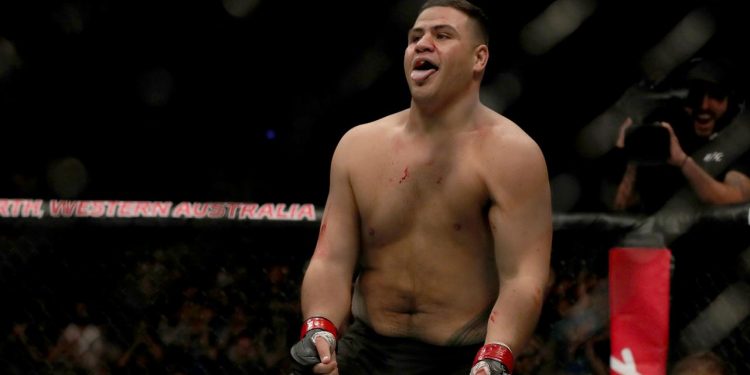 
Australian heavyweight contender Tai Tuivasa has urged Dana White and the UFC to bring a stacked pay-per view card back to Australia by the end of the year, so Aussie fight fans can finally enjoy watching the country’s superstars go toe-to-toe with the world’s best.

On Sunday, Tuivasa will fight Derrick Lewis in the co-main event at UFC 271 in Houston, before Rob Whittaker faces Israel Adesanya in a re-match of the biggest fight in Australian history.

“It has to happen. Imagine if this card was in Australia. We’ve got Australia and New Zealand fighting for the belt and the next best heavyweight on the way up,” he said.

Australia hasn’t hosted a UFC PPV card since October 2019, when a record 57,127 fans filled Marvel Stadium in Melbourne for Whittaker v Adesanya 1. However, the country’s borders are scheduled to re-open on February 21 to all fully vaccinated tourists and other visa holders, which will allow the UFC to bring its huge production team back to our shores.

Last year, Australia was pencilled in to host this current card, before a series of COVID related setbacks scrapped the plans.

The complications mean Tuivasa now has to fight the number three ranked heavyweight Lewis in a hostile environment – the ‘Black Beast’s home city of Houston – rather than in his home country.

ULTIMATE GUIDE: Everything you need to know about UFC 271

“If Australia opened up, I’m sure I wouldn’t get boos there, so hopefully soon enough, you know, we get a show back home and we get rockin’ back down under,” he said.

Today, the 28-year-old from Mt Drewett weighed in at 265 pounds, or 120kgs, ahead of the much-anticipated slugfest, as ‘Bam Bam’ aims to flatten a man who possesses the most UFC knockouts in history – 13.

“This is why I fight. For challenges like this,” he said.

At the end of the day, as fighters we like to challenge ourselves and why not get in there against the one and only knockout king?

“We definitely won’t be wrestling like you’ve heard, but we’re definitely going to use our skills. I knock people out as well, you know what I mean? So, one of us is getting knocked out and I don’t reckon it’s going to be me.”

‘GET’S ME HEATED UP’: Adesanya’s dream revealed amid feud with homeland

‘HE’S NO.1’: How Whittaker’s value would explode by beating Adesanya

And the Aussie rising star won’t be altering his aggressive fight style to counter the 37-year-old veteran.

“I just focus on myself really,” he said.

Tuivasa has been winning over fans since his breakout win over Andrei Arlovski at UFC 225 in June 2018. With his walkout music trolling audiences across US cities and his larrikin personality warming to the world’s media, Tuivasa even used the stage this week to launch a new product – the “Shoey-vasa” – a plastic shoe that allows beer drinkers to pay tribute to Tai without soaking their own footwear.

“It’s pretty simple. You chuck your beer in the back. It’s got a bit of a lever, open and close, and then boom, you’re on baby,” he said.

But for fans of the original ‘shoey’, don’t worry, Tai will still use a traditional shoe after his victories in the Octagon.

As for any parting words for Lewis before Sunday’s fight?

“Yeah! Make sure you use the Shoey-vasa!” he laughed.

‘There was always some kind of an emergency or some urgent need for money’: More young Americans fall victim to old-fashioned romance scams

'There was always some kind of an emergency or some urgent need for money': More young Americans fall victim to old-fashioned romance scams