Where Is St. Peter’s University Located and Why are They Called the Peacocks? 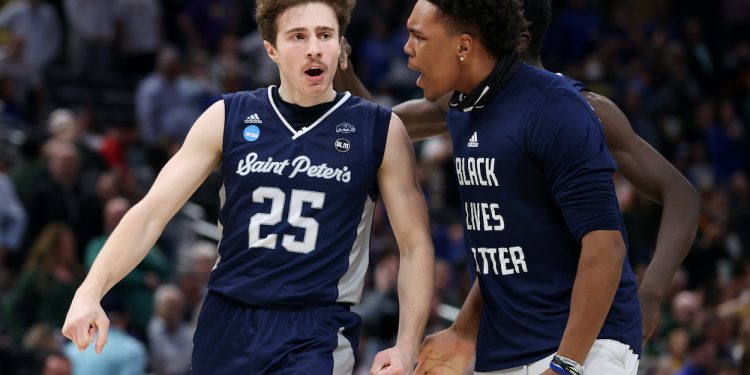 
St. Peter’s quickly became America’s favorite college basketball team after defeating 2-seeded Kentucky in one of the greatest upsets in NCAA Tournament history. By doing so, the Peacocks became just the 10th 15 seed ever to knock off a 2 seed in the first round of the tourney.

As the underdogs attempt to continue their Cinderella run, let’s learn a bit more about St. Peter’s and how its Peacocks nickname came to be.

St. Peter’s made NCAA Tournament history with upset of Kentucky

Leading up to the 2022 NCAA Tournament, Kentucky was one of the most popular picks to win it all. The Wildcats finished in third place in the tough SEC this season, and they had national player of the year candidate Oscar Tshiebwe patrolling the paint.

Not many experts or fans saw Kentucky losing before the Elite Eight, and even fewer expected John Calipari’s squad to struggle with 15-seeded St. Peter’s in the first round. But the Peacocks weren’t the least bit scared of the blue bloods from Lexington.

St. Peter’s rode a hot shooting start to an early lead, and the MAAC champions jogged to the locker room at halftime tied with Kentucky at 37. The Peacocks refused to fade in the second half, as they went blow-for-blow with the Wildcats and forced overtime late in the game.

In miraculous fashion, St. Peter’s outscored Kentucky, 14-8, in the overtime period and pulled off the 10th upset for a 15 seed in NCAA Tournament history. Daryl Banks, the team’s leading scorer, knocked down five three-pointers and poured in 27 points, while Doug Edert exploded for 20 points off the bench and scored the team’s final five points in regulation to force overtime.

The Peacocks will now face 7-seeded Murray State in the Round of 32 for a chance to continue their magical run.

Where is St. Peter’s located?

If you’ve never heard of St. Peter’s University before the 2022 NCAA Tournament, you’re not alone. So, let’s learn a little bit about this fun Cinderella, shall we?

St. Peter’s is a private Jesuit college located on a 30-acre campus in Jersey City, New Jersey, which is a short drive away from New York City. Founded in 1872, it’s still the only Jesuit university in the state of New Jersey. It has an enrollment of about 3,000 students and features 18 NCAA Division I athletic teams.

That enrollment might just jump up after this tournament run.

Where did the Peacocks nickname come from?

In 1930, Father Robert Gannon, who was the dean of St. Peter’s at the time, chose a peacock as the school’s mascot. The peacock, which was also known as a phoenix in ancient Egyptian mythology, perished in the flames of a funeral pyre and emerged from its ashes more beautiful than ever.

Fitting for the Peacocks’ late comeback against Kentucky.

Unsurprisingly, St. Peter’s is the only Division I institution with a Peacock as its mascot.

Fire incident in Oswestry was a false alarm

Sorting Through the Destruction From Several Wildfires, Texans Brace for More – The New York Times

Sorting Through the Destruction From Several Wildfires, Texans Brace for More - The New York Times