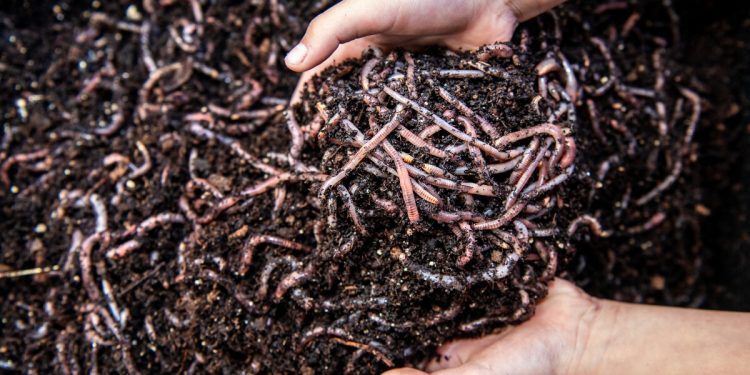 
Wriggly, voracious Eisenia fetida — red wiggler worms — could be the new livestock for Southern California gardeners … if only they were easier to find.

The demand for composting worms skyrocketed during the pandemic, when people stuck at home discovered (or rediscovered) the joys of gardening. On top of that, a new state law requiring food waste stay out of landfills has generated more interest in worm composting.

Most local farmers aren’t big self-promoters, but we found 13 in Southern California who currently have red wiggler worms available, with prices ranging from $25 per pound to $75 per pound.

A challenge to the supply chain: Once a worm farmer’s supply depletes, rebuilding the stock can take a while because baby worms need 90 days to be old enough to breed.

“Back during the start of the shutdown my business quadrupled,” said Stan McCall, whose business, McCrawls Red Worms, has been selling worms for about 10 years. He raises red wigglers in his backyard and sells them from his shop in Cypress, where he operates his other business — Custom Creative — polishing stones. Demand has tapered off since then, but it’s still strong, he said, with sales of 5,000 to 10,000 worms a week.

A pound of these hungry composting worms can devour half their body weight a day.

A pound of these hungry composting worms can devour half their body weight a day under optimum conditions — with the help of beneficial microbes who break the food down into microscopic worm-size bites, according to worm farmers. But even better, their poop — known as castings — is pure gold for plants and thus highly coveted by organic gardeners — especially cannabis farmers, whose many medicinal products make organic growing a must.

As a soil amendment, worm castings act as fertilizer, helping plants grow stronger with higher yields. And when the castings are made into a “tea,” they also help protect plants from a variety of pests, said Chris Jung, a.k.a. the Worm Wrangler, who raises and sells worms at his Glendale home.

Mike Matosian of Oaktree Worm Farm & Soils gave up selling worms after the Creek fire destroyed his Sylmar nursery in 2017. He’s been raising worms just for their castings since then, but he’s had so many requests to purchase composting worms that he’s decided to resume selling the worms by early April.

“Cannabis growers love to use it,” Matosian said. “I mean, they don’t tell me they’re cannabis growers, but I can usually tell. They always say something like, ‘I’m growing a bunch of tomato plants,’ but castings aren’t cheap. I sell regular compost for roughly $25 a yard, but I’m getting $450 a yard for castings, so you’ve got to be motivated. The only farmers who can use it on that scale are cannabis growers.”

Castings are a natural byproduct of raising worms, but they’re also labor intensive to collect, which is why they cost so much more than compost, according to the worm farmers. By raising their own worms, plant lovers can avoid the steep price of castings while reaping the benefits in their gardens and keeping methane-producing food waste out of our landfills.

That’s a double win for the environment, and there’s another bonus too, according to L.A.’s youngest worm farmers. You can use the worms for races — and saving for college.

Will Hatanaka, 7, and his sister, Alyssa, 8, are owners of Will’s Worms in Studio City. They chose that name because “it’s shorter, their dad, Kevin, explained. They raise and sell a variety of composting worms with the help of their dad and their three guinea pigs Phyllis, Patches and Tuxie.

How do guinea pigs help raise worms? “They poop a lot,” the siblings shout in unison, and then Alyssa laughingly explains. “The wormies like to eat the poop of vegetarian animals.”

These mini entrepreneurs know their stuff, rattling off the types of worms they grow and their benefits, the amount of time they spend each day on their care (about 1½ hours) and a list of their other “favorite” weekly activities — children’s choir, Chinese lessons, karate (they are both green belts, with a goal to become brown belts this summer), hula hooping, basketball and, of course, playing with their guinea pigs.

Will and Alyssa got into worm farming at the beginning of the pandemic in 2020, when they discovered their father’s neglected worm composting bin in the backyard. They found some worms still alive and used them for races, putting them in the center of a garbage can lid and cheering for whoever reached the edge first, Will said.

After a while they wanted more worms, Kevin said, “But I said, ‘You can’t just buy more and more worms as toys or pets; you have to do something productive with them. I’ll buy the worms for you, but you have to devote the time to learn some business skills.’”

Now the siblings have trays and stacks of red wigglers, the preferred composting worm, plus purplish African nightcrawlers, which they say also work well for composting, and a few trays of European nightcrawlers for anglers. They’ve since paid off their dad’s initial investment and are now the “owners,” although they still rely on him to manage their advertising and inquiries. Almost all of their earnings go into their college savings funds.

After a whirlwind tour of their operation, with quick stops for tree climbing, rope swinging and trampolining, Alyssa and Will corral their guinea pigs to take them back inside. As they gather the anxious animals, a few small black pellets appear beneath them and Alyssa squeals in triumph.

Where to buy worms in Southern California

Below is a list of where to find composting worms and related products in Southern California. Most of these farmers also sell worm castings and/or tea. Worms are typically sold by weight, with about 600 to 1,000 worms to a pound, depending on their size. Unless otherwise noted, all these farmers provide worms for pickup, but they ask customers to call ahead or order online to ensure the worms are available when they arrive. Have we missed someone? Email jeanette.marantos@latimes.com and we may add them to our list.

‘I almost lost my baby’: Parents demand answers from FDA

‘I almost lost my baby’: Parents demand answers from FDA