Which Couples Are Still Together from 90 Day Fiance: Before The 90 Days (Season 5)? 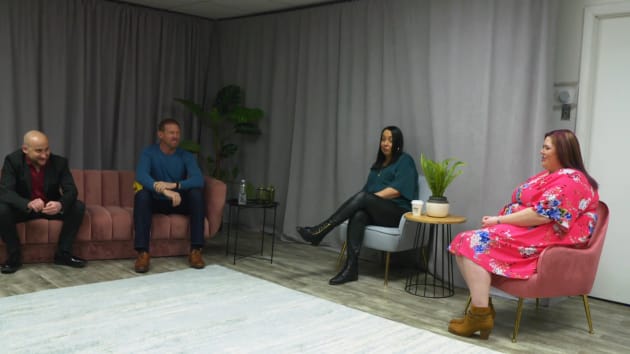 Season 5 is winding to a close and we’ve all seen the 90 Day Fiance: Before The 90 Days Tell All Part 1.


Of all of the couples this season, only one could be together on the Tell All stage.


Some of them are playing details of their lives close to the vest — especially those who will be on future seasons.


But how many of them are really still together?


First up, let’s start with the easiest couple to address.


Memphis and Hamza stumbled a little early on in their relationship, as both needed to be more honest with the other.


They also have one of the biggest language gaps ever featured in this franchise, leading Memphis to use simplified language … and earning a “Cookie Monster” nickname.


Memphis and Hamza made it clear that there was more than “sexy time” between them, however.


After a lot of ups and downs and communication struggles, the two married in Tunisia.


Memphis arrived as Hamza’s girlfriend. She flew back to Michigan a married, pregnant woman.


Memphis showed up at the Tell All witha  total glow-up, knockout look … and still together with Hamza.


She stood out among the other couples, as she and Hamza were the only ones who could physically sit together.


Everyone else, whether still “together” or apart, had one partner on the stage, one partner communicating through a screen.


Up next are Kimberly and Usman.


Usman has appeared on the show before, and he’s back again with yet another older American woman.


Kimberly did not want to be seen as a “superfan.” What she did want was yammy-yammy from Usman.


Despite initially treating her like a groupee — and not the kind that you sleep with — Kimberly got what she wanted.


He spent the night, they boned, and though Usman wouldn’t say “I love you” or kiss her in public, Kimberly was mostly happy.


But the season ended with her looking at a future of seeing him a few times a year, at most.


At the Tell All, Kimberly came prepared to defend her romance with Usman.


However, she was crushed when she — and her castmates — saw a clip of Usman calling and flirting with Zara.


Part 1 of the Tell All ended with Kimberly in tears … but no confirmation of a breakup has surfaced.


Caleb and Alina were a complicated couple, and not just because of their story.


The two met up in Turkey, as their friends-to-lovers story led to them meeting in person for the first time.


Though Alina’s disability gave Caleb pause at first, the two spent plenty of time in bed together.


Then, of course, Alina was fired, with the couple edited out of the rest of the season and disinvited from the Tell All.


Though many viewers noted that some of her critics were using a real wrongdoing in bad faith because they simply disliked her, it didn’t change her past misdeeds.


Though Alina and Caleb appear to have parted on good terms, it does not look like they are still together.


On what we saw, it looked like Caleb wasn’t prepared for a long-term romance with Alina in light of her disability.


Perhaps the ending that we saw months ago was misleading, but they are not at the Tell All to correct us.


Mike and Ximena started off as a very sweet couple.


Mike hasn’t been in a “real” realtionship since he was 14, while Ximena is a young mother of two.


The two met through Ximena’s cam work, where Mike offered to financially support her so that she could quit that job.


Despite some initial tender moments, the two turned out to be a toxic nightmare.


Ximena seemed to grow bored of Mike, picking both fair and unfair flaws … yet not quite going so far as to break up with him.


When Mike felt brokenhearted, he showed his ugly side, insulting Ximena and her family, and at one point refusing to leave her home.


Mike began to give the impression that he felt that supporting Ximena as a girlfriend meant that he owned her.


Hurt people say hurtful things, but that is not a side of Mike that many viewers will soon forget.


Add that to Mike’s racism scandal — in many ways worse than Alina’s, despite less backlash — and it was hard to feel sorry for him.


This toxic couple ended their engagement before the season ended, but a cliffhanger on the finale showed them threatening to reconcile.


On the Tell All Part 1, they confirmed that they’re back together, and there have been reports for months that Mike and Ximena filmed another season.


However, the two strongly hinted at another ugly breakup in February, and Ximena seems to already be with a new man.


Speaking of creepy men, up next, we have Ben and Mahogany.


Ben is in his fifties and believed that he was speaking to a 24-year-old, not to a 22-year-old.


Mahogany had tried to discourage Ben from coming, but he ignored her wishes and flew down anyway. This was the beginning of a pattern for him.


At first, Mahogany seemed like a total catfish, and viewers still aren’t sure what her whole deal is.


As the season ended, they were very much over, though at the Tell All, Ben confirmed that they had spoken the night before.


Ben and Mahogany were spotted in a mall in Lima, Peru several weeks ago, even photographed by a fan of the show.


Whether or not they were filming again, they were unwisely spending time in each other’s company months and months after Season 5 filming had wrapped.


We can’t explain his judgment or hers. Some people cannot stop making the same mistake.


Ella and Johnny were perhaps this season’s least eventful couple, as they did not get a chance to meet.


(It’s a real shame, and personally I hope that they can return for another season and meet up — they both deserve happiness)


Between the COVID-19 pandemic itself and the protections put into place, Johnny kept delaying meeting Ella, and each delay hurt more than the last.


Sometimes, even the most valid excuses in the world stop being enough after they’re used too many times.


Ella ended up sleeping with a friend, which she confessed to Johnny (for some reason, Kimberly was particularly furious with her over this).


It appears that they are still together (unless they say otherwise during Part 2), but have yet to actually meet.


Gino and Jasmine were one of the most bizarre and at times horrifying couples this season.


There is simply no excuse for how much screaming and betrayal viewers were forced to endure.


They both owe each other so much more than what they offered.


Gino leaked Jasmine’s nudes to his ex, simultaneously breaking Jasmine’s trust while proving that he’s hung up on his ex.


Jasmine would cry and scream and yell with little or no provocation — having meltdowns over the color of the walls of Gino’s house, which she has never visited.


The two ended up getting engaged despite a bajillion fights and other red flags, though Gino “forgot” to bring up a prenup.


At the Tell All, Gino declared that he had “decided” that he did not need a prenup.


Gino confirmed that they are in the K-1 visa process and that he hopes to bring her home to MIchigan soon.