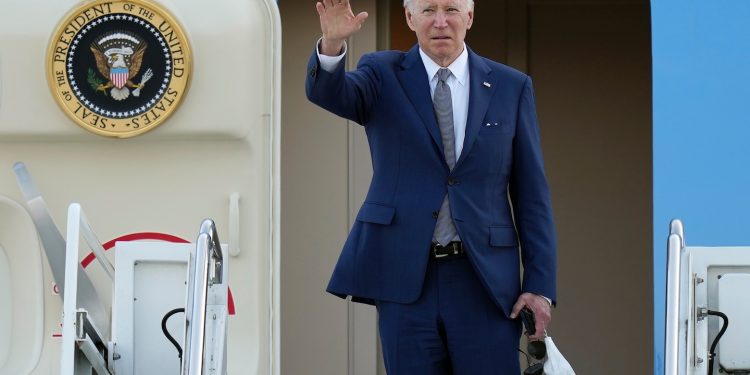 President Biden is expected to sign an executive order Wednesday aimed at bolstering police accountability, a move that could re-energize federal reform efforts as the nation marks the second anniversary of the police killing of George Floyd, according to multiple people briefed on the announcement.

Floyd’s family members, civil rights advocates and law enforcement officials are expected to join the president at the White House for a signing ceremony at 4 p.m. Wednesday. Biden will call for the creation of national standards for the accreditation of police departments and a national database of officers with substantiated complaints and disciplinary records, including those fired for misconduct, the people briefed on the matter said.

The executive order also will instruct federal law enforcement agencies to update their use-of-force policies. Advocates have been urging the White House to take such action since a sweeping police-reform bill failed in Congress last year. The bill was named for Floyd, a Black man who died under the knee of a Minneapolis police officer who was subsequently fired and convicted of murder.

“If you had asked me six months ago, I would have said it’s not time for an executive order yet because we should be focused on federal legislation, the George Floyd bill in particular,” said Damon Hewitt, the president and executive director of the Lawyers’ Committee for Civil Rights Under Law. “But once that effort was sabotaged, the administration has stepped up as much as it could via executive action.”

Biden’s executive order will authorize the Justice Department to use federal grant funding to encourage local police to tighten restrictions on the use of choke holds and no-knock warrants — steps that federal law enforcement agencies have already taken. It also will set new restrictions on the sale of military equipment to local law enforcement agencies, said the people familiar with the document, some of whom spoke on the condition of anonymity because the order had not yet been issued.

“We feel that this executive order should lay the groundwork for moving forward in a manner which will standardize training and procedures and hopefully standardize police across the country,” said Jim Pasco, executive director of the National Fraternal Order of Police, who was involved in negotiations with the White House and was briefed on the contents of the order. “And we hope it will be an element in healing the rifts that exist in some places between police officers and the communities they serve.”

Biden, who was en route to Washington on Tuesday after a trip to Asia, will issue the order amid a rise in violent crime and concern among civil rights groups that the White House has lost a sense of urgency around police reform.

He announced he would take executive action on police reform through executive authority last September after the collapse of the federal legislation, which would have banned choke holds and no-knock warrants, prohibited racial profiling and eliminated qualified immunity for police officers.

But in a nation polarized over discussions of race and criminal justice, negotiations over the order were fraught. Police groups denounced a leaked draft in January that stated there was “systemic racism” in the criminal justice system.

Pasco said the final version of the order includes “allusions to racism. But it’s all in the manner in which it was presented. Significant changes have been made in the phrasing, in the policy statement.”

The White House does not have the power to make some changes long demanded by advocates, like getting rid of qualified immunity, which protects police officers from being sued individually for misconduct. Dozens of statehouse bills that would eliminate such immunity have also been defeated. Other changes, like banning choke holds or adopting stricter policies about when police can use force, also require action on the state or local level.

But Marc Morial, a former New Orleans mayor who is now president and chief executive of the National Urban League, called the order “a very important step.”

“We recognize that this process is not going to be easy,” Morial said. “This is a long fight. I’m going to accept this first important step by the president because it’s a powerful statement, and it reflects what he can do with his own executive power.”

Larry Cosme, president of the Federal Law Enforcement Officers Association, said the order will have the most direct impact on the nation’s 100,000 federal officers, given that Biden’s ability to act unilaterally on policies for local and state police is limited.

But Cosme said the document could serve as a “national role model for all law enforcement around the country. We’ve engaged in hundreds of hours of discussions, and this can inspire people in the state and local departments to say: ‘This is what we need to do.’”

He emphasized that the order will include sections aimed at providing more support for officer wellness, including mental health, and officer recruitment and retention at a time when many departments are facing low morale and staffing shortages.

“No officer wants anyone, not the suspect or the victim, to lose their life,” Cosme said. “We want the maximum safety for everyone in the country.”

This is a developing story. It will be updated.