White over-80s are almost TWICE as likely to have had jab than elderly black Britons, report reveals

White over-80s are almost twice as likely to have had the coronavirus vaccine than elderly black Britons, a report has found.

The research comes amid amid claims from ministers that Covid-19 vaccine refusal rates are highest among black, Asian and ethnic minority (BAME) Britons.

The data, collated by OpenSAFELY on behalf of NHS England, also revealed that 62 per cent of South Asian over-80s, 16,814, had received the Covid jab, followed by 59 per cent, 1,645, of elderly people of mixed ethnicity. 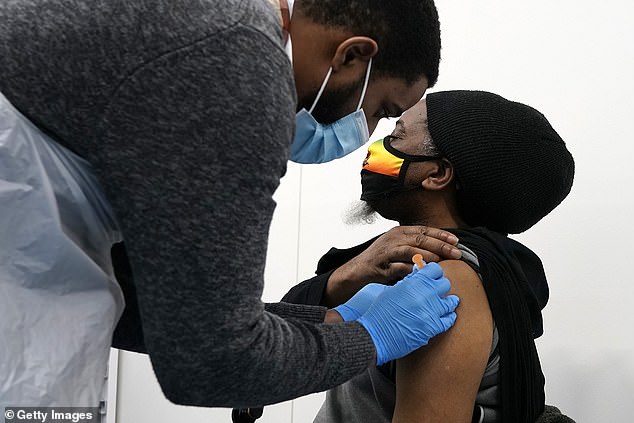 Chief executive of the Runnymede Trust, the UK’s leading independent race equality think tank, Halima Begum explained how the findings ‘isn’t about vaccine refusal’ but shows a need to support BAME people to put their ‘trust back in our public services’.

Speaking about hesitancy among BAME people to access NHS services, Dr Begum told The Guardian: ‘That fear is often based on past experience, whether incidents of simple misunderstanding, cultural confusion or, in the case of some patients, an outright fear of perceived hostility and racism.’

It comes after Nadhim Zahawi, who was born in Iraq and moved to the UK aged nine, described how although figures suggest uptake is high, vaccine hesitancy ‘is skewed heavily towards BAME communities’. 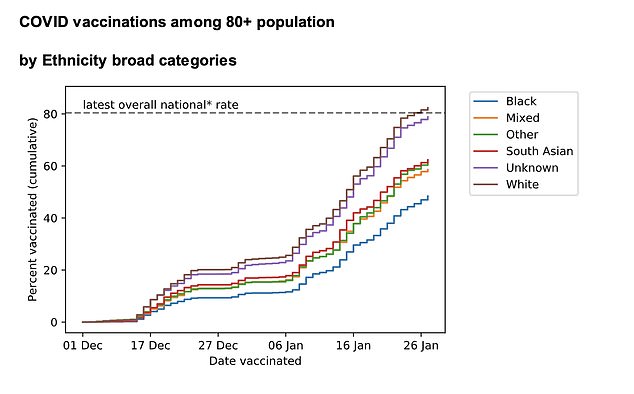 Figures showed that 48 per cent of black Britons over-80 have been vaccinated in England, up until January 27, compared to 82 per cent of white elderly Britons

Scientists believe uptake of 85 per cent would be enough to achieve herd immunity, when so many people are immune to a disease that it peters out.

‘So currently the UK is a standout country in terms of people wanting to keep themselves safe by being vaccinated and keep their families and communities safe.’ 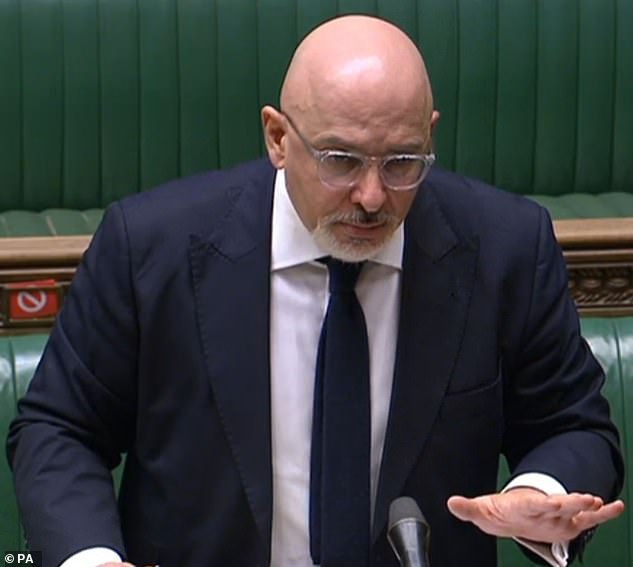 The advisory panel has blamed years of ‘structural and institutional racism and discrimination’ for vaccine scepticism among BAME communities, mainly black, Pakistani and Bangladeshi people.

Boris Johnson visited a vaccination clinic at the Muslim Al-Hikmah centre in Batley, West Yorkshire, this week, in an effort to boost uptake among BAME groups.

Mr Zahawi added: ‘I am spending a lot of time with the NHS to make sure we record, of course, ethnicity but also have a strategy of how we reach those hard to reach groups working with local government.’

The minister could not say whether the health service was recording when someone asked for a jab says they will not get it.

It came after an ONS survey published last month said uptake was at 85 per cent overall, a rise of seven per cent since their previous survey between December 10 to 13.

The Prime Minister urged everyone to make sure they got their jabs during a visit to a vaccination site in Yorkshire this week.

‘The vaccine programme has got to continue to be successful,’ he said.

The paper presented by SAGE included the results of a survey which showed a shocking 71.8 per cent of Black people said they were unlikely to get a Covid-19 vaccine if offered one

The Government is aiming to vaccinate all 15million in the top priority groups – over-70s, NHS staff, vulnerable and care home residents – by mid-February, meaning they will need to get jabs into the arms of 350,000 people a day.

Meanwhile, it emerged last month that Number 10 has hired a PR firm to boost uptake of the jab among BAME groups.

London-based Multicultural Marketing Consultancy (MMC) has been tasked with clamping down on vaccine misinformation and improving jab hesitancy among minorities.

MMC prides itself on its ‘ability to connect with communities’ at a ‘grassroots level’ through media and other channels, according to the company’s website.

The firm has previously worked on No10 campaigns to increase awareness about prostate cancer in black men and female genital mutilation.

Black, Asian and ethnic minority Brits were up to 50% more likely to die from Covid at peak of first wave than white Britons, study finds

Black, Asian and ethnic minority (BAME) Britons are up to 50 per cent more likely to die from coronavirus in hospital than white people, another study has found.

Throughout the UK’s epidemic, an overwhelming body of evidence has shown that minorities are at a disproportionate risk of catching and dying from the virus.

Fresh research, by Queen Mary University, found the risk of dying from Covid was 50 per cent greater in Asian Brits than white people. For black people, the risk was 30 per cent higher.

The study looked at hospital patients during the first wave of the crisis and researchers adjusted for other factors such as age, sex, obesity and whether they smoked.

The analysis of nearly 1,800 patients in hospitals in London also found the risk of falling critically ill and needing mechanical ventilation was 80 per cent greater in black Brits than white people at the first peak. For Asian patients the risk was 54 per cent larger.

Researchers behind the study said they were shocked that minority patients were ‘significantly younger in age’ and ‘less frail’ than white patients, despite being at a bigger risk of falling seriously unwell.

The team did not say what caused the risk and added that further research is needed to understand the reasons why those from Asian and black backgrounds have higher mortality from Covid.

Experts believe BAME Brits are more likely to catch Covid in the first place because they live in deprived areas, use public transport, work public-facing jobs and live in overcrowded and multi-generational homes.

Covid-19 is a disease that kills fewer than one in 100 people it infects, so the more people contract it, the greater chance of a fatality occurring. And the risk of serious complications is driven up by the fact ethnic minorities are more likely than white people to suffer from pre-existing health conditions such as high blood pressure, heart disease, diabetes and obesity.

It comes amid fears that BAME Brits will refuse the coronavirus vaccine, with surveys showing up to 70 per cent say they are ‘unlikely’ to accept it.

The business of bees – ScienceBlog.com

The business of bees - ScienceBlog.com

Fortnite Chapter 2 Season 5: How to Unlock the New Batman Skins in the Game