Who is Brian Benjamin’s wife? Meet the family of arrested politician 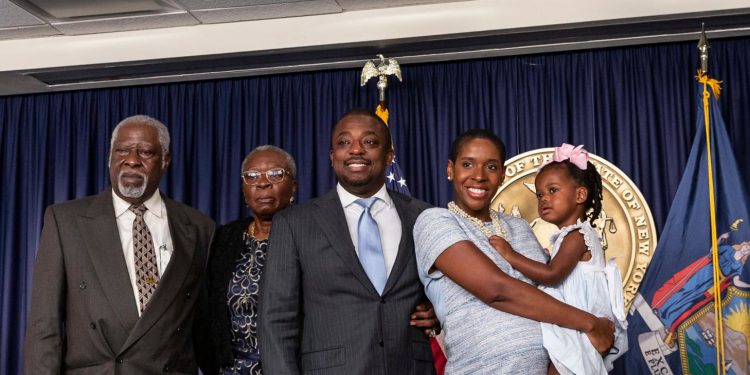 
Brian A. Benjamin, New York’s second in command to Governor Kathy Hochul, was charged with bribery, fraud, conspiracy and falsification of records while a state senator. This was revealed in a federal indictment unsealed on Tuesday, 12th April, as per The New York Times reports.

Benjamin was charged over alleagtions of obtaining campaign contributions from a real estate developer. It’s claimed the contributions were in exchange for using his influence to grant funds for a non-profit the developer controlled.

Benjamin pleaded not guilty against the charges of bribery, fraud, conspiracy and falsification of records at court on Tuesday.

Learn about the family of the American politician and businessman who has been arrested in a campaign finance scheme.

After he has resigned from his position, find out who is Benjamin’s wife, Cathleen?

Who is Brian Benjamin’s wife?

@catmbenjamin has a privatised Instagram account with over 700 followers. A Black Lives Matter border frames her family profile picture featuring her husband and eldest daughter.

Benjamin’s wife lives in New York and is from Chesapeake, Virginia, as shown on her Facebook page (Cathleen McCadden Benjamin) whereby she has over 2,000 friends.

On 8th October 2021, @brianbenjaminny wished his wife a happy birthday via a heartfelt Instagram post. In the caption, the politician described Cathleen as a “worker, a wife, a mother, a daughter, a volunteer and an all-around great human being.”

Cathleen has welcomed two children with the American businessman. First on 2nd January 2019 when their daughter Caroline Annette Benjamin was born.

On 29th October 2019, the pair then became parents for the second time when Olivia Addison Benjamin was born.

The couple are now parents to their three-year-old and sixth-month-old daughters.

The married couple celebrated their third wedding anniversary in September 2021. Benjamin stated on social media that they have “a lifetime to go”.

In 2017, Cathleen uploaded a photograph on her Facebook page showing Brian Benjamin knelt down as he proposed to marry her.

In other news, Billy Ray Cyrus and Tish Cyrus’ net worth revealed amid their divorce