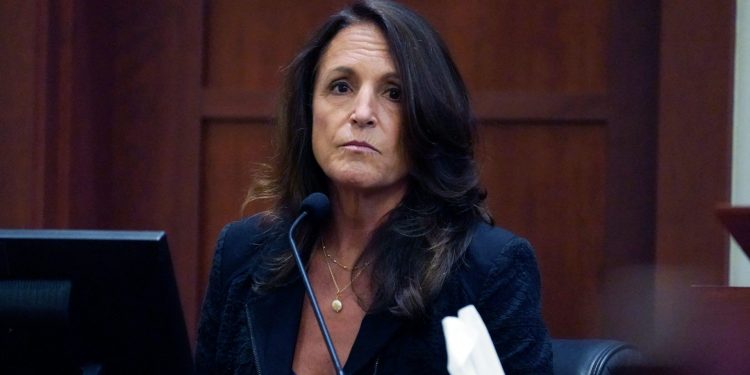 The Pirates Of The Caribbean star Johnny Depp is suing his ex-wife and Aquaman actress Amber Heard for defamation because of an op-ed she wrote for the Washington Post in 2018. Heard is countersuing Depp.

Entertainment consultant Kathryn Arnold appeared in court on Monday, May 23rd to talk about the impact of the case on Heard and Depp’s respective careers. Here’s what we know about Arnold.

Who is Kathryn Arnold?

Kathryn Arnold is an entertainment expert and producer with 20 years of experience in feature film and TV development, production, international sales, and finance.

According to her bio, Arnold graduated with a BA in Economics from UCLA and has lived in France, Italy and Mexico.

She started out as an executive at The Maltese Companies where she worked on the production of Pound Puppies: The Legend of Big Paw and Manhunt Live: The Search For The Green River Serial Murderer.

Arnold worked in the development of several feature films, including Batman, Tango and Cash, Rain Man, Bird on a Wire, The Last Dragonamong many more.

She served as an executive producer on Façade with Eric Roberts and Angus Macfadyen and The Velocity of Garywhich starred Vincent D’Onofrio, Salma Hayek and Ethan Hawke.

She was appointed as Head of Production at MonteCristo Entertainment where she oversaw the work of English and foreign language films.

Her bio states that she currently sits on the Board of Advisers of a tech investment company.

Arnold was brought to court by Amber Heard’s side on Monday (May 23rd) to discuss the impact of Heard and Depp’s legal troubles on their careers.

Arnold has claimed that Depp’s career had suffered “very little” due to Heard’s 2018 op-ed in The Washington Post, The Independent reports.

“Very little. Hardly anybody even knew the op-ed existed before he filed the suit, if anybody who I knew, but certainly not Disney,” she claimed.

When asked about the impact on Depp’s Pirates of the Caribbean 6 deal, Arnold said: “Zero. The movie doesn’t exist yet so that’s one reason, but as important is the fact that Disney, in their file for this trial, did not have the op-ed.

“The conversations of Depp not being in franchise going forward were discussions before the op-ed even came out.”

As per The Independent, Arnold claimed that Depp’s lawsuits, including his 2018 libel case against The Sun, have brought more damage to his career than the op-ed.

According to the entertainment expert, Heard could have negotiated her Aquaman 2 contract for $4 million but claimed this wasn’t possible because Heard was “very negative” among the public.

Arnold further claimed Heard would have earned a total of $20 million if she had negotiated a movie for $4 million every year.

Johnny Depp is suing Amber Heard for defamation because of an op-ed she published in the Washington Post in 2018. Heard is countersuing Depp. The case is set to continue.