Who needs to sail off to an island when you can walk to these beautiful British peninsulas?

There’s nothing quite like a holiday on a remote island when you need to put some distance between you and the rest of the world, but in these days of strictly restricted travel just getting to one can be impossible.

Thankfully, there is an alternative because, while there are more than 6,000 islands off Britain’s coastline, it is also blessed with peninsulas so you can still get away from it all for a refreshing walk, with a picnic and binoculars to hand.

Where Hampshire and West Sussex blur, the twin arms of the Manhood Peninsula and Hayling Island wrap around Chichester Harbour and its cluster of mini-peninsulas in between: Bosham, Chidham and Thorney Island. 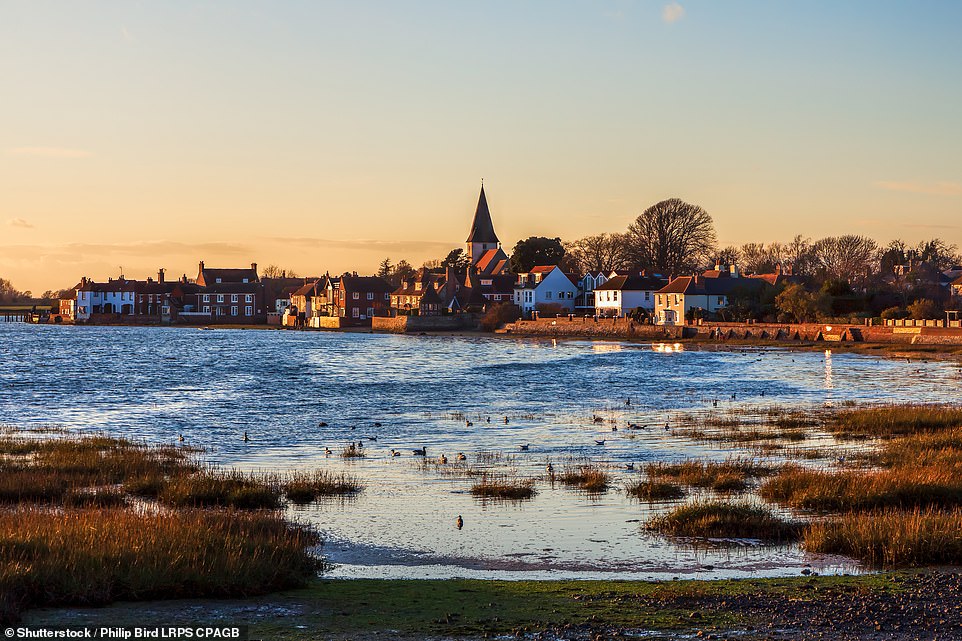 The quaint village of Bosham in Chichester Harbour, West Sussex. It lies in an area of multiple mini-peninsulas

The latter, with its profusion of hawthorn bushes, was once separated from the mainland by a channel that has now silted up, and an eight-mile walk takes you around its coastline with outstanding views of the harbour and out to sea. Or you can explore these semi-islands from the water on a seal or bird-watching trip (chichesterharbourwatertours.co.uk).

The Millstream Hotel in the pretty village of Bosham makes a good base from which to explore. B&B is from £122 per room per night (millstreamhotel.com).

Hanging on to Dorset by the slim thread of shingled Chesil Beach, the Isle of Portland is the Jurassic Coast’s most southerly point. The South West Coast Path loops around the tiny four-mile-long island, which is famed for its limestone, used in the construction of St Paul’s Cathedral and the United Nations headquarters in New York.

For a relaxing family break, head to Moonfleet Manor, just along the scenic West Dorset Heritage Coast. B&B from £189 a night (moonfleetmanorhotel.co.uk). 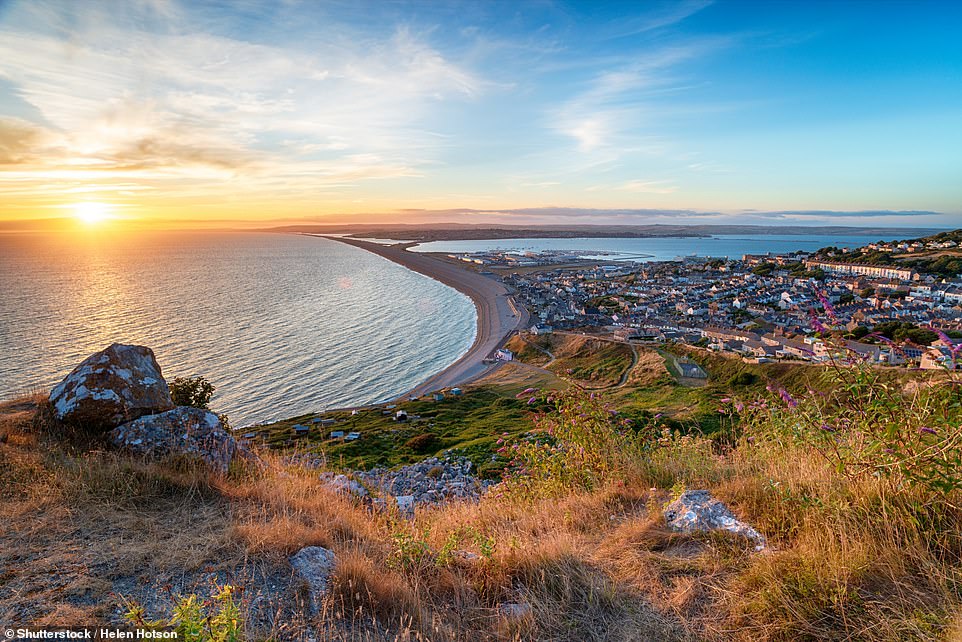 Hanging on to Dorset by the slim thread of shingled Chesil Beach, the Isle of Portland (pictured) is the Jurassic Coast’s most southerly point 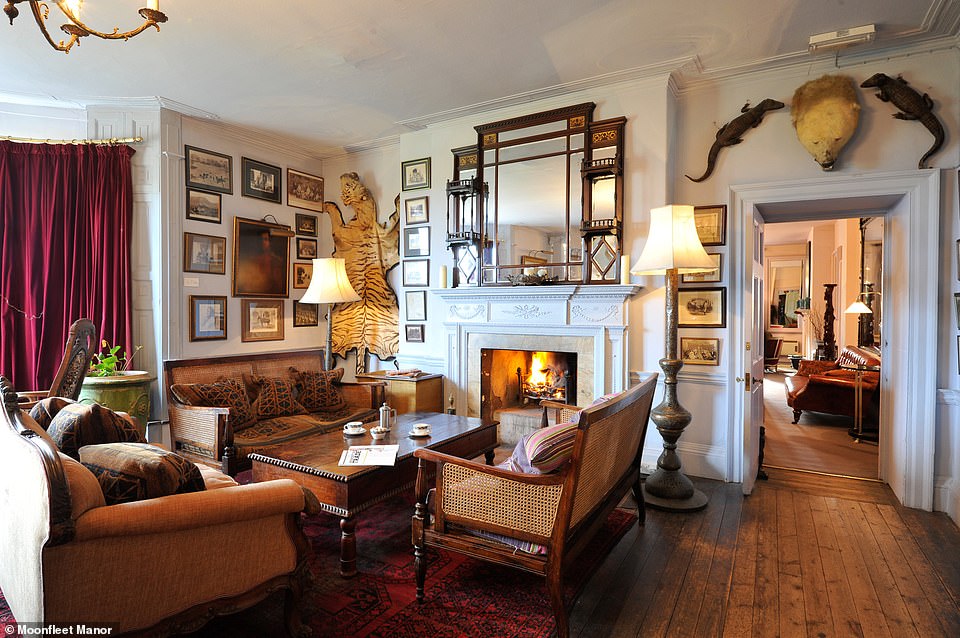 In the far west, Land’s End steals the limelight with sunsets at the furthest edge of the Cornish peninsula, but not far away is the UK’s most southerly point: the Lizard Peninsula. Its sparseness and location have drawn innovators as well as visitors. Guglielmo Marconi chose the Lizard for his radio transmission station, which was part of the first transatlantic radio message, and the flat Goonhilly Downs are home to an ‘earth station’ working on the exploration of Mars and the Moon.

Self-guided walking holidays around the Lizard with B&B accommodation cost from £330 (footpath-holidays.com), or plenty of self-catering cottages are available (cornishcottages.co.uk).

On the north-west coast of Devon, Morte Point nudges into the Irish Sea and was one of the first pieces of land acquired by the National Trust. Meaning ‘death point’, the promontory is the site of many shipwrecks, and one washed-up cargo of live pigs gave its name to the pretty cove called Grunta Beach. 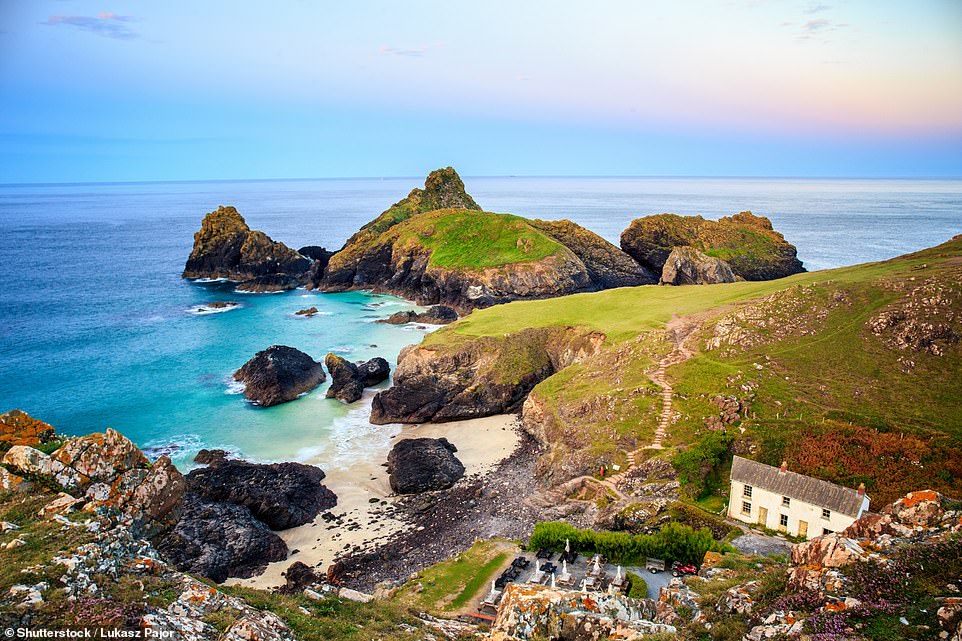 Land’s End steals the limelight with sunsets at the furthest edge of the Cornish peninsula, but not far away is the UK’s most southerly point: the Lizard Peninsula. Here you’ll find Kynance Cove (pictured), which harbours one of Britain’s loveliest beaches

Tractor and trailer rides are the easy way to explore the point, discover its history and spot seals.

Stay just a few minutes’ away in the cute two-bedroom white-washed Old Post Cottage in Mortehoe, from £424 to £895 per week for four (sawdays.co.uk).

Wales is itself a peninsula of peninsulas – Gower, Llyn, St David’s and Pembrokeshire are all semi-surrounded by the Irish Sea – but a favourite is the Marloes, jutting out from the Pembrokeshire coast. An eight-mile circular walk takes in long, sandy beaches, dramatic rock formations and clifftops strewn with wildflowers. Watch out for choughs and kestrels, and try to spot grey seals and porpoises playing at sea. For the adventurous there are kayaking trips around the Marloes and other parts of the Pembrokeshire peninsula (mayberrykayaking.co.uk). Make a weekend of it and check in to Monk Haven Manor, at St Ishmaels on the Marloes Peninsula, with B&B from £110 per room per night (monkhaven.co.uk). 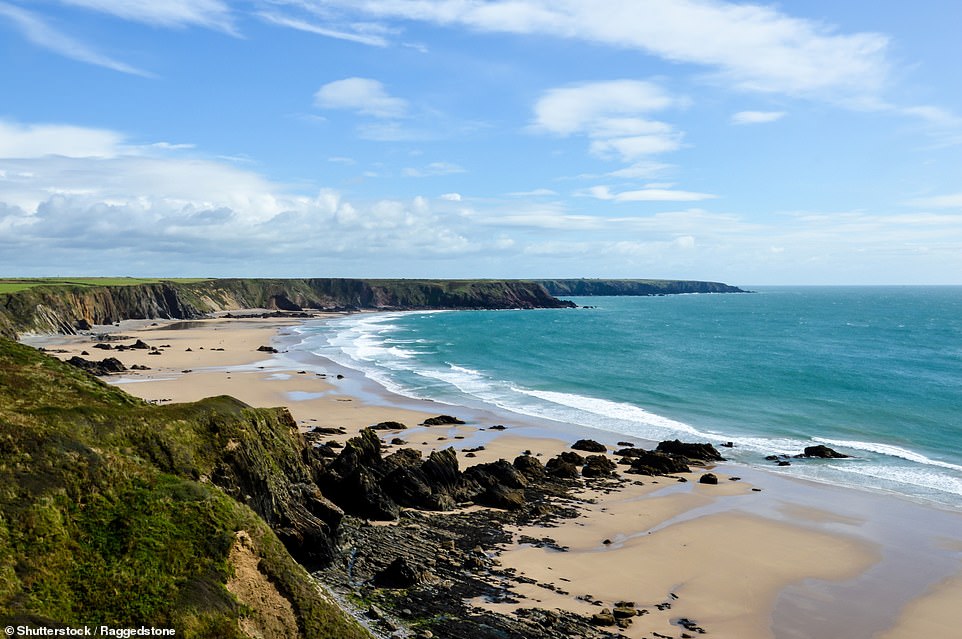 Wales is itself a peninsula of peninsulas – Gower, Llyn, St David’s and Pembrokeshire are all semi-surrounded by the Irish Sea – but a favourite is the Marloes (pictured) 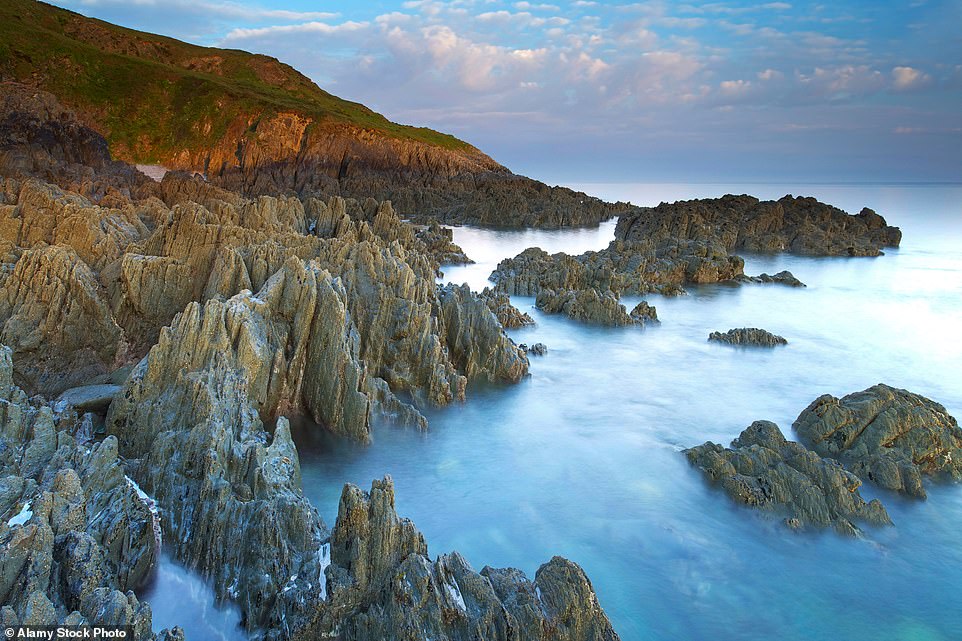 A wildlife reserve of great natural beauty, it’s also lined with historic buildings and ancient sites, from the austere Castle Ward and the elegant Mount Stewart House to the mysterious, megalithic Giant’s Ring. All are an easy drive from Belfast city centre, or take a minibus tour (kudosexecutivetransfer.com).

Scotland’s West Coast has the UK’s most jagged and dramatic coastline, with numerous inlets, forths and lochs carving out peninsulas. Perhaps the most famous is Kintyre, thanks to Paul McCartney’s song describing the ‘mist rolling in from the sea’. Kintyre stretches 30 miles from the Mull in the south to Loch Tarbert in the north. Macsadventure.com offers a self-guided walking tour around the long and winding Kintyre Way. 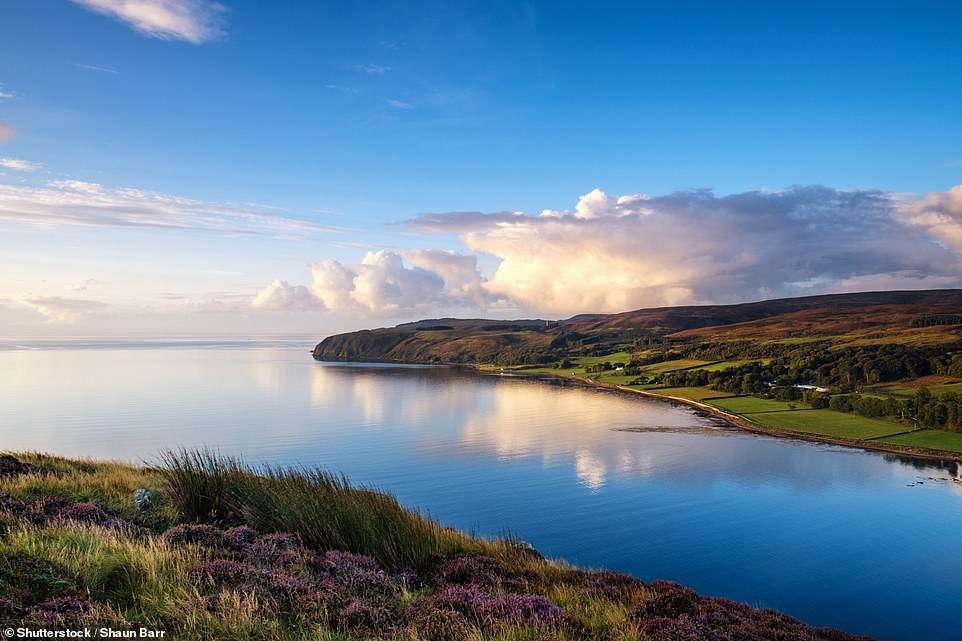 A calm sea at Campbeltown Loch, as seen from Davaar Island on the Kintyre Peninsula

It’s all about the clear air and views at New Orleans cottage (a romantic spot for two), whether tucked up inside or on the terrace. Plan a boat trip to the isle of Gigha for sandy beaches and grilled halibut at The Boathouse restaurant. B&B from £107 per night (sawdays.co.uk/neworleanscottage).

Spurn Point off East Yorkshire is one of the most striking features of Britain’s coastline and is listed as one of the BBC’s seven man-made wonders of England.

This curving spit is made up of a series of sand and shingle sea defence works built by the Victorians and maintained by the Ministry of Defence until it sold it in the 1950s to Yorkshire Wildlife Trust, which now runs regular Spurn Safaris throughout the year (ywt.org.uk). 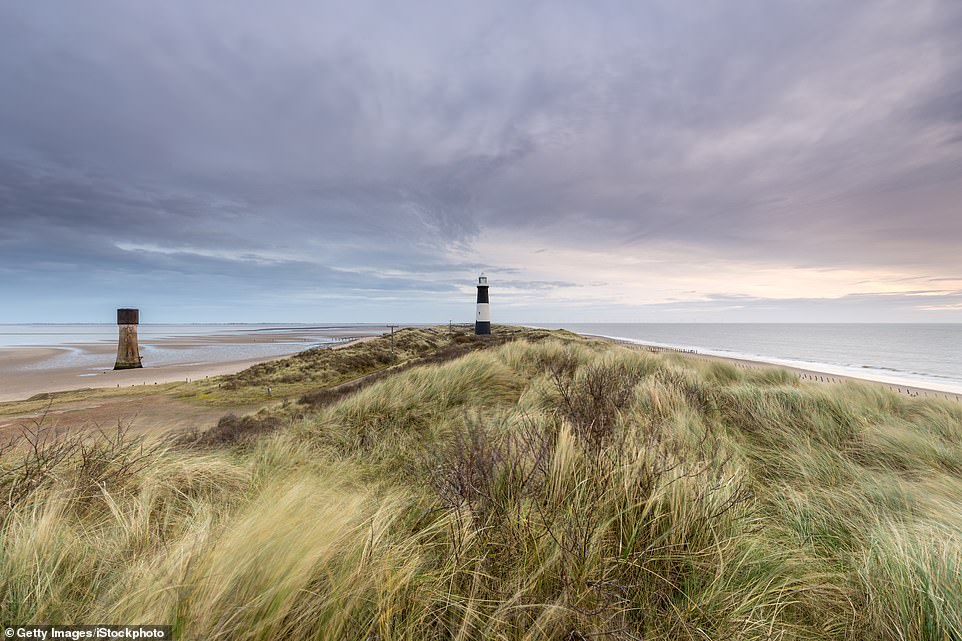 Edges of the world: Yorkshire’s Spurn Point is listed as one of the BBC’s seven man-made wonders of England

It’s an hour’s drive to Dowthorpe Hall, near Hull, which is perfectly positioned to explore more of the East Yorkshire coast. Owner Caroline is a passionate cook, so expect home-made bread and a full English before taking a turn around the pretty gardens. B&B from £100 per room per night, based on two sharing (sawdays.co.uk/dowthorpehall).

Further south, artists and writers have taken inspiration from the Shotley Peninsula, a small, flat stretch of land between two great Suffolk rivers – the Stour, which leads directly into Constable country, and the Orwell, which local writer Eric Arthur Blair loved so much that he took it as half of his pen name: George Orwell.

Arthur Ransome used this boaters’ paradise as a setting for his children’s classic We Didn’t Mean To Go To Sea. But you can get out on the water with orwellrivercruises.com or stay in the contemporary Upper Lodge in Shotley, from £620 per week (bestofsuffolk.co.uk).

‘Ours was the marsh country, down by the river,’ wrote Charles Dickens in Great Expectations of the Hoo Peninsula, where the mudflats and saltmarshes fired his imagination. These North Kent marshes, sandwiched between the River Thames and Medway, make for a great escape from the capital for the day – it’s just 30 miles away.

Take a four-mile trail from the village of Upnor and explore riverside beauty that also attracted artists Turner and Hogarth to paint here (discoveringbritain.org). 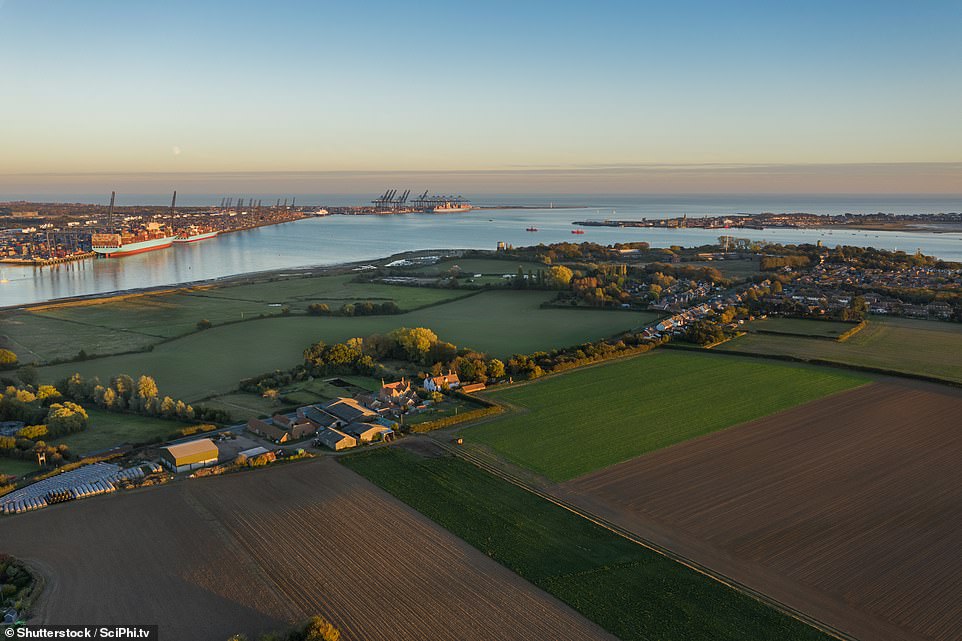 The Shotley Peninsula, a small, flat stretch of land between two great Suffolk rivers – the Stour, which leads directly into Constable country, and the Orwell, which local writer Eric Arthur Blair loved so much that he took it as half of his pen name: George Orwell. This image shows the view from the peninsula towards Felixstowe container port

Never even heard of QR jacking? It’s a cynical new ruse to steal YOUR cash

Never even heard of QR jacking? It’s a cynical new ruse to steal YOUR cash