‘Whoa! How old is he?’ – Henry recalls first meeting with 16-year-old Rooney before Man Utd icon’s goal against Arsenal 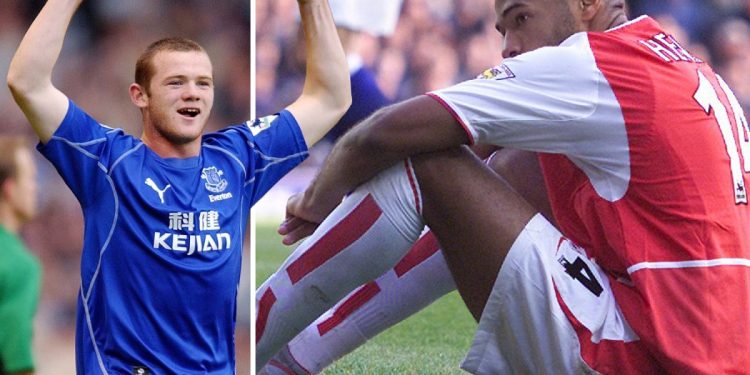 THIERRY HENRY revealed how Wayne Rooney took his breath away when he first caught sight of him – and then dealt Arsenal a stunning blow.

Henry was part of the defending champion Gunners who travelled up to Goodison Park in October 2002 unbeaten in 30 games.

But Rooney’s stunning first Prem strike, a 30-plus yarder past David Seaman, announced him in glorious fashion.

Henry said: “We’d heard there was this young kid at Everton who was going to score goals and had the body of a man.

“You looked at his body and you could see the power just see him walking.

“They were the best team in the league, 30-odd games unbeaten, [Patrick] Vieira, Sol Campbell, Henry.

“I was in awe, thinking ‘there’s David Seaman; there’s all these players I’ve watched for years’.

“I didn’t realise was how big they all were. They were massive. And I thought ‘f*** me, these absolutely huge!’

“You are always watching the clock and then I came on.

Wayne Rooney has retired from playing after an illustrious 19-year career.

“Then I remember Campbell backing off and my eyes just opened up, thinking ‘This is my chance’.