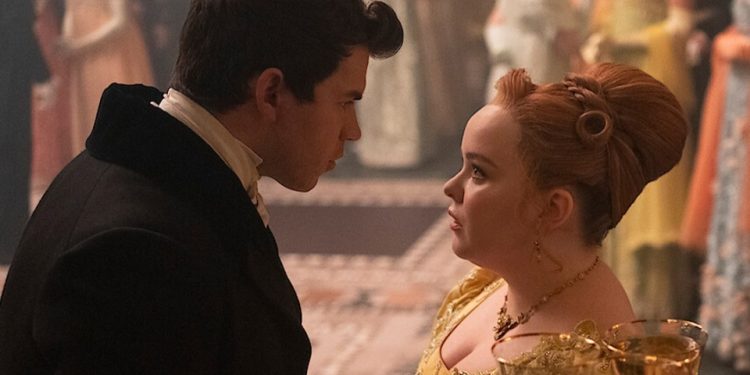 
Gentle readers of the Ton, trouble is brewing online after Netflix announced a rather big change to its flagship series, Bridgerton.

The show, based on the eight-book series by Julia Quinn, will stray from its source material. Unlike Seasons 1 and 2, which followed the order of the books, Season 3 will skip ahead to the fourth book.

The news was announced via the Bridgerton social media accounts, and although plenty of fans are pleased with the news, having fallen in love with the Netflix adaptation, faithful readers of the source material are a little miffed …

If the show had followed the book order, Season 3 would have introduced viewers to Sophie Beckett, Benedict’s love interest.

Change comes to the Ton

The story switch-up isn’t the only change coming to Bridgerton this year.

In March, showrunner Chris Van Dusen confirmed he was stepping down from his role after two successful seasons, confusing (and concerning) fans.

But Van Dusen told reporters at the time that he was simply ready to move on to his next project.

“But at the end of the day, it was time for me to move on and hopefully create that magic again in the near future.”

This isn’t a clean break, however, as Van Dusen will stay on as an executive producer on the show.

Replacing him in the top job is Jess Brownell.

This will be her first gig as showrunner, but Brownell has worked at Shondaland (the production company behind Bridgerton) for 14 years.

“Chris Van Dusen and I came up together and have worked together for over a decade and he’s been enormously supportive, which has been wonderful,” Brownell told Variety on Tuesday.

Brownell has worked on Bridgerton since Season 1, so consider her well-versed in the art of making viewers swoon.

So, why the change?

Explaining why they’ve chosen to deviate from the source material, Brownell told Variety that it “really feels like it’s Colin and Penelope’s time”.

“Because we’ve been watching both of these actors on our screens since Season 1, we’ve already invested in them a little bit. We know who they are as people,” she said.

Brownell added that, in the last season, there were moments of tension where Colin almost realises that Penelope has feelings for him but doesn’t quite get there.

“Instead of treading water on that dynamic, we wanted to push it into their season. It really felt like the perfect moment to tee it up.”

Fans can still expect to see Benedict in Season 3, though.

Brownell said he “will be a vital part” of the next season.

Even though fans are absolutely chuffed for Coughlan, they can’t help but feel disappointed over Benedict’s snub.

That said, Netflix has already renewed Bridgerton for a fourth season, so Benedict’s story is coming. We just have to wait a little longer.

It’s also worth noting that Bridgerton has weathered raging storms before.

At the end of Season 1, lead actor Regé-Jean Page, who starred as the dashing Duke of Hastings, exited the series of his own volition.

People doubted the show would survive without the Duke, even if the second season didn’t focus on his character.

But Page’s mind was made and Season 2 went ahead without him … and swiftly knocked Season 1 out of the no.1 spot on Netflix’s ranking of its most popular English-language TV series of all time.

We’ll just have to wait and see if Bridgerton Season 3 can mirror the magic.

Monkeypox Outbreaks: Where They Are and What We Know (Updated) – Gizmodo

Monkeypox Outbreaks: Where They Are and What We Know (Updated) - Gizmodo