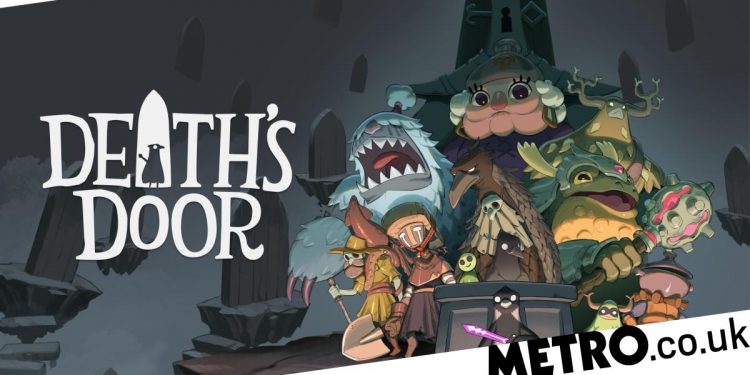 
A reader offers his review of indie favourite Death’s Door and explains why the combat, puzzles, and game length were such a perfect match.

The Games Inbox has been a morning staple of mine for some time now, enjoyed over a morning tea it is the perfect excuse to delay commencement of the daily grind.

I was struck, when late last year GC reminded readers that it was only contributions from ordinary folk that keep it going, that I probably don’t contribute enough, given how much I enjoy reading everyone else’s comments.

The ones I like best are reader reviews, and I love a feature where someone looks back on their gaming year or the like, so I thought I’d commit to writing in with some brief thoughts on every game I played in 2022. I probably tried about 30 games last year, so it doesn’t mean I am going to bombard the Inbox, but a few days ago I finished my first game of 2022: Death’s Door.

There is a general feeling in my mind, that if a game has an isometric perspective I am predisposed to enjoy it. Everything just looks so enticing from that angle. I haven’t really analysed why, but so it proved with Death’s Door, another isometric game which hooked me in from the first moment the camera moves into its fixed place.

I’ve seen the gameplay described as a mix of Zelda and Dark Souls (it’s what attracted me in the first place) and while I think that is a good description, I think it should also come with a caveat.

When I first heard that description, I though the Dark Souls influences would describe the difficulty, or punishment for death, given how synonymous Soulsborne games have become with difficulty and how you level up. I’m obviously a bit of an exception here, because the vast majority of media coverage mentions it Souls influences, but I can’t say I really identified with the comparison.

The only thing that I thought was obviously reminiscent of Souls was how your crow opens up the level through a series of gates, shortening your trek back through the level, should you perish on the journey. Other than that, I would have said a ‘tough Zelda’ description would have been more helpful to describe how playing the game feels.

The pillars of Souls gameplay to me are a dark, doomed atmosphere but Death’s Door’s world is full of colour and vibrancy, with a whimsical sense of humour (a bard who sings songs of your exploits throughout, I found utterly charming). Punishment for death is also significant in Souls, whereas in Death’s Door you don’t lose any XP, and so are allowed to take more risks with the combat, and the frustration of losing progress is never present.

On the subject of frustration, the difficulty of the game is also perfectly pitched for me. The combat is firm, in that if you are not concentrating or taking the threat seriously, you’ll be cut down very quickly. But if you attack at the right time, and don’t get too greedy with how you approach enemies, I found that I passed the vast majority of encounters first time.

However, you are definitely kept honest by the game, and in particular any first encounters with new enemies are trickier, where their attack patterns can still surprise even the most careful crow. Luckily, if you are surprised the checkpointing is generous enough that you won’t find yourself trudging back too far, and one thing I really appreciated: the game has checkpoints before all bosses, and any particularly tricky fights you are invited to retry instantly.

The story introduces you to what is essentially a glorified office (the crows do not have the capacity to work from home it seems) where our crow is a reaper for the Reaping Commission, who move souls on between this life and the next. Unfortunately, our young crow loses his assigned soul, and to make amends is instructed to visit three different locations and collect some ‘giant’ souls instead. (I think Acid Nerve missed a trick by not calling them Titan Souls as a nod to their previous game, but I digress).

I didn’t think the story was particularly strong, and while it does its job of giving you a purpose and a good ending, I felt the story was just fine, but not something that will live long in my memory (in fact I had to Google why exactly the crow started poking his beak around in the first place).

The crow protagonist is peculiarly lacking any real personality, and while he does the odd bird like thing, tilting his head to give you the side eye, I found it to be the weakest part of the game. There’s also never really an explanation for why the crow cuts down quite so many enemies, or why they attack you on sight in the first place. Would the game be better for it? It’s debatable, as it’s the gameplay that matters in a title like this of course, but it’s also what I felt held Death’s Door back from being a great game, although it is still a very good one.

Luckily the moment-to-moment gameplay and the high level gameplay loop are excellent. The crow moves with satisfying speed, he has an invincible dodge-roll (always love this in any game), and a basic combo depending on what weapon you have selected. That’s pretty much it, but if it sounds too simple it is the tactics you employ to cut down the enemies in each encounter where the combat sings.

Rather than learning combos, you learn attack patters, where not getting hit is the key to success, and that is what kept me always engaged in each battle. The exploration is a joy, with the isometric angle hiding plenty of secrets, or giving you a tantalising glimpse of what appears to be an unreachable path, almost daring you to solve the puzzle of getting there.

I found the gameplay loop of explore/find dungeon/solve puzzles/conquer boss/back to hub (you see that Zelda influence loud and clear here) to be really compelling, and almost comforting in how the loop was clearly repeated through three distinct areas, but somehow remained fresh and interesting throughout (possibly due its perfectly judged eight-ish hours length).

There’s also some post credits content, although it’s not quite compelling enough to make me go through that. Not because I didn’t love it, it’s just that I have a fairly limited time to play; the backlog struggle is real and grows ever longer. So, it’s onto the next game on said backlog for me (Plague Tale: Innocence), where I shall darken your (death’s) door again with thoughts on that. Until then, thank you for reading.

Playtime: ~8 hours
Pros: Firm but fair combat is always engaging and the world and characters have a lovely charm
Cons: The protagonist could have had far more character


MORE : Death’s Door review – Dark Souls meets Zelda: A Link To The Past