Why Ericsson took on its own government to defend rival Huawei


A company acting under pressure from China, or one standing up for free trade and a global internet?

The extraordinary sight of Ericsson, the Swedish telecoms equipment maker, squaring up to its own government in support of its Chinese arch-rival Huawei has laid bare the intense geopolitical tensions facing some businesses.

Borje Ekholm, Ericsson’s chief executive, had already raised eyebrows in November when he criticised Sweden’s decision to ban Huawei from its 5G networks, saying in an interview with the Financial Times that the move restricted free trade and competition.

But in private he went even further. Swedish daily Dagens Nyheter this month revealed text messages sent by Mr Ekholm to a government minister in Stockholm in which the chief executive said of the ban: “As it looks right now, Sweden is a really bad country for Ericsson.” He added that in his situation “you fully understand why Europe has very few tech companies”.

Anna Hallberg, Sweden’s minister for foreign trade, must have sensed an implicit threat to leave Sweden as she replied that the country was a good place for a global company to have its headquarters.

It’s tragic in a sense that he has to plead with Swedish ministers to do something, otherwise Ericsson will be harmed

So was Mr Ekholm merely fighting his corner, or was his lobbying of his own government on behalf of Huawei a sign of how China manages to exert influence on large multinationals?

Sweden’s decision to ban Huawei was unusual in several respects. Sweden has a model of having strong independent regulatory agencies, as evidenced in its controversial approach to the Covid-19 pandemic. So the Huawei decision was not taken directly by the national government. Instead, it was made by its telecoms regulator on the advice of its security services and armed forces, which warned that China was involved in “extensive intelligence gathering and theft of technology, research and development”.

But the decision also stood out because, instead of mentioning vague national security concerns for the ban as other European countries had done, Sweden set out the worries of its intelligence services explicitly.

For Mr Ekholm, Sweden could have achieved the same end-result of barring Huawei from its networks but in a more subtle manner that protected Ericsson and other Swedish companies from retribution. Indeed, Chinese authorities warned within days of the announcement that there would be a “negative impact” on Swedish companies.

Ericsson’s chief executive also argued that other things were at risk. He told the FT that Huawei was not just a competitor but a partner in setting global standards for networks. Inside the Swedish company there is a worry that the global telecoms operating system could be at risk, at a time when China and other parts of Asia are ahead in 5G.

However, others argue that Ericsson might have been threatened by the might of a China where it sells far more network gear than, for instance, in Sweden. Elisabeth Braw, a Swede who is resident fellow at the American Enterprise Institute, notes that Mr Ekholm appeared to confirm to Dagens Nyheter he had felt pressure from Chinese authorities on the matter. 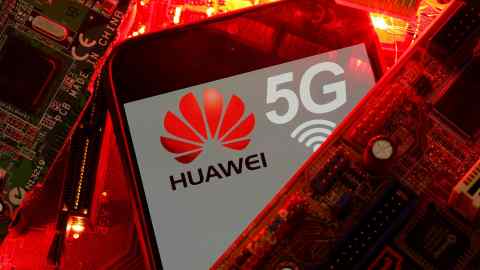 “It’s tragic in a sense that he has to plead with Swedish ministers to do something, otherwise Ericsson will be harmed,” she says.

For Ms Braw, western governments need to up their game to better support their companies from potential threats from China and elsewhere. “If you’re the government of Sweden or Finland or the UK or Germany, you now have the responsibility to help your companies, otherwise they may not be your companies any more,” she argues.

Mr Ekholm’s complaints underscored the piecemeal nature of many European countries’ approach to Huawei, China and broader technology matters. There is little sense of a joined-up policy on how to deal with the threat from China or support domestic companies.

Several European countries, including the UK, have talked about finding other network gear suppliers to reduce the risks of depending too much on Ericsson and Nokia. That contrasts with the US where the Trump administration had floated the idea of taking a stake in one or both of the Nordic duo.

The stakes are high: China’s support of Huawei, through cheap funding and much else, is well known, and has led to a commercial advantage that Ericsson and Nokia can find hard to counter on their own. Will Europe, for which 5G is a rare technological sector where it enjoys a clear lead over the US, stand up for its homegrown talent?