Why hugging means you live longer! It can reduce stress, lower blood pressure and lessen pain


Many of us long to see our loved ones, and millions won’t have had so much as a hug from a friend or family member in months — so the first thing you may want when you reunite is to embrace.

Yet, in a recent poll 59 per cent of people questioned said they would no longer greet others with a kiss, a hug, or even a handshake in future, for fear of spreading germs.

While such strategies may help cut the risk of catching coronavirus, science tells us a lack of physical contact may have knock-on implications for our health — and may even make us more likely to pick up infections.

A survey from early last year shows how much our attitude to human contact has changed since the pandemic.

Conducted between January 21 and March 30 (covering the nine weeks before, and a week into the first lockdown), it found that 72 per cent of people had a positive attitude toward touch and 43 per cent felt society was not ‘touchy’ enough — even before restrictions were introduced. The data, collected by researchers at Goldsmiths, University of London, from 40,000 participants in 112 countries, also showed that touch had benefits on mood and health (albeit self-reported). 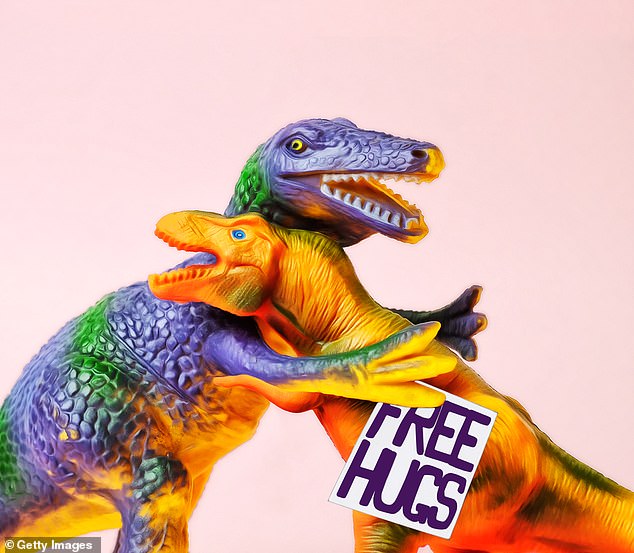 In a recent poll 59 per cent of people questioned said they would no longer greet others with a kiss, a hug, or even a handshake in future, for fear of spreading germs

‘People who reported having received touch more recently tended to report higher levels of wellbeing and feeling less lonely,’ says Michael Banissy, a professor of psychology at Goldsmiths, who led the study. ‘This is in line with what we know from other work showing that ‘affective’ touching, such as stroking or hugging, that has an emotional aspect, can lower blood pressure, reduce stress and feelings of pain.

‘It can also benefit our immune systems, improving the response of our cells against infection,’ he says.

A study published in the journal Psychological Science in 2015 examined the role of hugs in fighting infectious disease. Psychologists at Carnegie Mellon University in the U.S. questioned 404 participants about their social support, interpersonal conflict (any type of strain in relationships) and how much they’d been hugged in a two-week period, before exposing them to a common cold virus. Volunteers were then monitored in quarantine.

Those who’d had the most hugs were less likely to develop a cold — and if they did, they showed milder signs of illness. The researchers proposed that hugging and social support lowered levels of stress hormones such as cortisol, which can have a damaging effect on immunity. 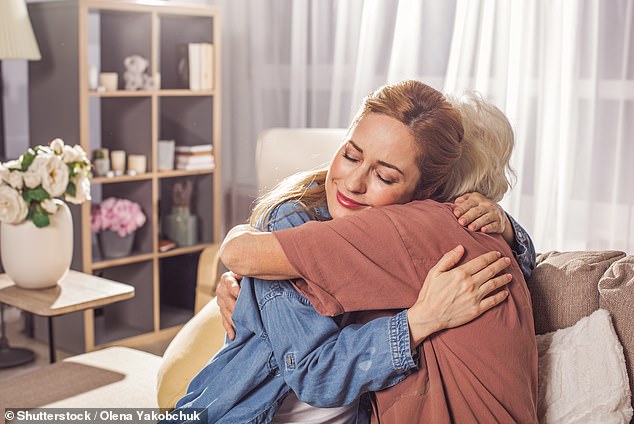 Science tells us a lack of physical contact may have knock-on implications for our health — and may even make us more likely to pick up infections. Stock image 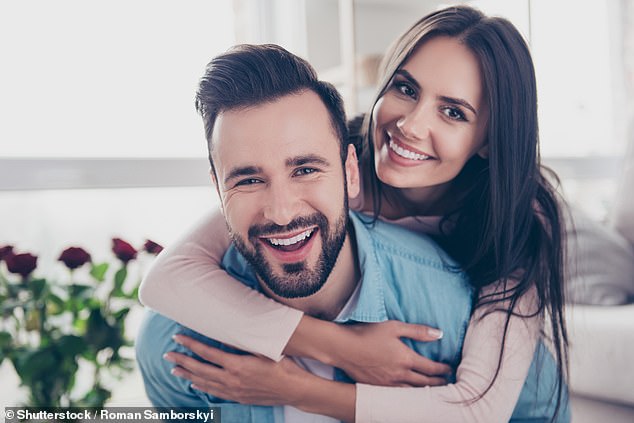 Professor Banissy says:’Touch plays a really important role from the earliest stages of life, it’s deeply linked to how we form social bonds’

‘Studies over the past ten to 15 years show that the best predictor of your mental and physical wellbeing and health is the number of close friends you have — with whom you do all these touching activities,’ says Robin Dunbar, a professor of evolutionary psychology at the University of Oxford.

‘Touch triggers a set of specialised nerves in the skin that go directly to the brain and stimulate the release of endorphins, neurotransmitters [chemical messengers] involved in the pain system.

‘It creates the same feelings as we get from morphine, to which endorphins are chemically related, but without the addictive properties. This reward system forms the basis of bonding in primates.’

Professor Banissy adds: ‘Touch plays a really important role from the earliest stages of life, it’s deeply linked to how we form social bonds, and these have been shown to be one of the biggest predictors of mortality.’

The drug raloxifene was approved in the 1990s as a preventative and treatment for postmenopausal osteoporosis — a loss of bone density after menopause due to the drop in oestrogen, a bone-strengthening hormone. It can cause bones to fracture more easily, commonly the wrist, hip or vertebrae.

Raloxifene is a selective oestrogen receptor modulator, a drug that can imitate the effect of oestrogen on bones.

So, although a year of social distancing has heightened awareness of how close contact can spread infection, there is such a thing as being too cautious, experts say.

‘Interpersonal touch is a major part of our everyday lives — something we may not have thought about before,’ says Dr Natalie Bowling, who also worked on the study at Goldsmiths.

‘Hugs in particular have a communicative value, demonstrating empathy. In our survey in the early days of the pandemic, 54 per cent of people said they had too little touch in their lives.

‘Only 3 per cent said they had too much. Other research has shown that the proportion of people missing touch has increased to 60 and 70 per cent since then.

‘We know that touch has a powerful effect in reducing our stress response, and so this is likely to negatively impact stress levels among people lacking touch.’

In fact, a new study by psychologists at University College London and Royal Holloway, University of London, could be the first to show the effects of touch deprivation on mental health during Covid-19.

In a study of 1,746 participants in the UK, France and Mexico who had been practising social distancing or had been in lockdown for an average of 46.1 days, they found that the more participants lacked touch, the higher their self-reported scores for anxiety, loneliness and poor mental health.

‘We are born with a biologically prescribed need for social care and comfort, and a life-long need for social attachment,’ says Aikaterini Fotopoulou, a professor of psychodynamic neuroscience at University College London, who led the study (which is yet to be peer-reviewed). ‘Without appropriate physical touch, we are deprived of this ‘contact comfort’ and we become worse at regulating negative emotions.’ 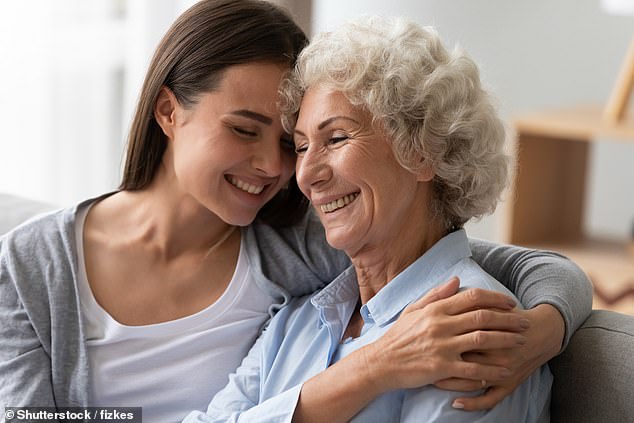 A survey from early last year shows how much our attitude to human contact has changed since the pandemic. Stock image 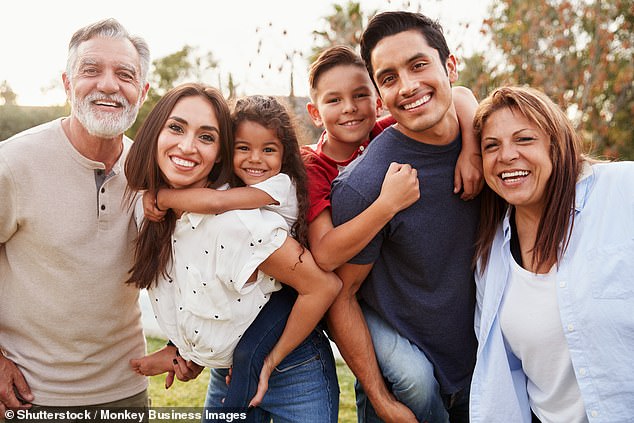 But will those of us who do want a hug find our need for affection is snubbed by friends and family when restrictions ease?

However, not everyone is craving a cuddle. The study showed that desire for contact was related to personality type.

DARK CHOCOLATE — a couple of squares a day may stave off age-related mental decline and dementia, suggests research in Spain. In a trial of 140 post-menopausal women, those who had 10g of 99 per cent cocoa chocolate daily for six months completed a mental assessment faster than those who did not, reports Nutritional Neuroscience.

‘Individual differences and context are important — not everybody likes hugs,’ says Dr Bowling. ‘While most people report positive attitudes towards touch, a significant proportion in our study — 27 per cent — reported negative feelings. People who are more introverted tended to dislike touch more than extraverted people.

‘Context is important, too — two-thirds of people said they would dislike being touched by a stranger. So it’s important to acknowledge that while there are many health benefits associated with touch in certain contexts, not all forms of touch are beneficial to all people. A hug may not always be welcome.’

But will those of us who do want a hug find our need for affection is snubbed by friends and family when restrictions ease?

Probably not, say psychologists. ‘Covid-19 restrictions have been applied for a relatively short period in comparison to our long evolution of social attachment and touch needs,’ says Professor Fotopoulou. ‘We will definitely return to hugs.’

Professor Dunbar goes further, predicting a deluge of hugs, cuddles and squeezes as soon as it’s safe. ‘Once we decide Covid-19 has disappeared and we won’t get infected, we’ll be back to normal. This happened after the Spanish flu in 1920. Remember what followed — the Roaring Twenties, the biggest street party since the age of the Regency beaus.’