Why is there an AR mushroom cloud over Santa Monica Pier? 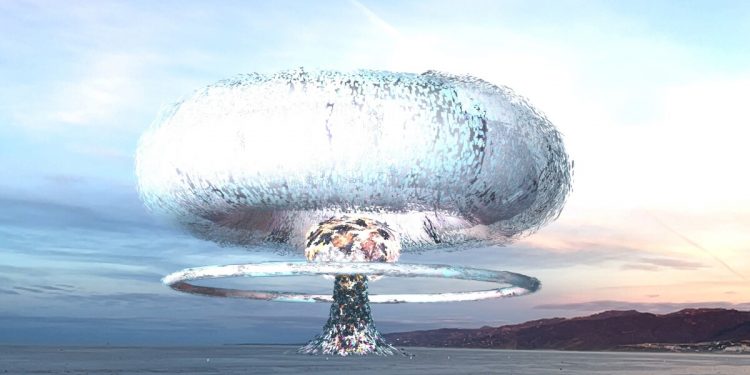 
Nancy Baker Cahill was in a Boston taxi headed to the airport when the apocalypse arrived. Or so she thought. It was August 2021, and as she gazed out the car window while speeding along the Massachusetts Turnpike, the rising sun appeared blood red and glowing — like nothing the L.A. artist, who’d grown up in Boston, had ever seen there before.

“This is unholy, this is not normal,” she thought. A frantic search on her phone revealed that the curious red sun was due to wildfires occurring on the West Coast. The ecological disaster, more than 3,000 miles away and yet so pronounced there, highlighted for her the “interconnectedness of it all” like a desperate East Coast/West Coast call and response.

When she returned home to Los Angeles, Baker Cahill — who works in drawing and sculpture and is a leading voice in new media art — soon began working on a climate crisis response of her own. Her augmented reality public artwork “Mushroom Cloud” debuted at Faena Art during Miami Art Week in December, a commission from the digital art platform Aorist. It makes its West Coast debut this Monday, timed to the Frieze Los Angeles art fair opening next week, on Feb. 17.

But the animated work will not be viewable inside the art fair tent or anywhere nearby. The staggeringly large piece will appear in the sky, above the ocean just beyond the Santa Monica Pier. Baker Cahill has geotagged it to that location, or “placed” it there, so it’s free and accessible to anyone who looks up — though it’s invisible to the naked eye. It can be seen only through the free smartphone app that Baker Cahill created, 4th Wall, and only when the viewer is physically in that particular location.

“It’s about recontextualizing accountability as it relates to the environment,” Baker Cahill says.

Standing at the edge of the pier and looking through a mobile device held up against the sky, viewers will see an enormous, fiery mushroom cloud swell up from the surface of the ocean before exploding. The sudden boom, whipping wind and steady roar are part of a soundscape created by L.A.–based artist and composer Anna Luisa Petrisko.

The piece, purposefully placed near a toxic waste DDT dumpsite, is a not-so-subtle commentary on rising sea levels, polluted waterways and raging wildfires. It also speaks to the proximity, in L.A., of those often concurrent ecological happenings.

“I had the opportunity to go big, and the ocean is quite a backdrop,” Baker Cahill says of conceiving the first iteration of the work in Miami. “And what is the ultimate symbol of human-caused cataclysm? It’s the mushroom cloud.”

But here’s the thing: “Mushroom Cloud LA | Proximities,” as it’s been retitled for this iteration, is ultimately a hopeful piece. After the cloud bursts, a crackling web of lacy, arterial threads spread throughout the sky. These lilac branches, connected by glowing nodes, form another sort of mushroom cloud, one depicting webs of hyphae, or fungus — mycelium networks — a system in nature that breaks down organic matter and redirects nutrients back to plants, trees and all carbon-based life. It’s a “connected care” model that Baker Cahill feels humans should take inspiration from, one prioritizing equity and accountability for one another and the planet.

“That network is a model of interdependence, interconnectedness and a truly decentralized system of community care,” she says. “If we want to imagine better systems [for humans], we can look to a system that already exists in nature.”

The aerial artwork is rife with metaphors, conjuring internet webs and cloud-based computing. In that sense, it speaks not only to environmental accountability but to conversations about accountability occurring around blockchain, a shared ledger of digital transactions — another generative, distributed network that has a significant impact on the environment.

The artwork’s many juxtapositions — of digital and organic imagery, of fire and water — add inherent “poetic tension,” Baker Cahill says.

The new AR work continues those conversations. But the project is far more than a single digital artwork in the sky; it’s a network of art objects and happenings. There are related, framed drawings for sale on the artist’s website, large-scale graphite abstracts on paper with spray paint and collage elements; there’s also a limited-edition NFT, a video capture of the mushroom cloud at dawn, which is being sold with a handmade, resin cube sculpture, “Fire Node.”

There’s also a two-minute video work, “Proximities,” viewable on Baker Cahill’s website, an abstracted collision of fire and water. It features a sound collaboration with Florida-based, Indigenous extended reality artist Amelia Winger-Bearskin, who contributed music and “sound seeds,” a mix of her vocals and audio from nature. The video is a 1-of-1 edition NFT, and it comes with five of the physical “Fire Node” sculptures.

“It’s an invitation for the collector to distribute those sculptures, those nodes, to important people in their network,” Baker Cahill says. “It’s a distributive model.”

Ten percent of art sale proceeds will go to Winger-Bearskin’s Wampum.Codes initiative, which supports Indigenous leaders and Land Back movements. In that way, Baker Cahill says, her project itself becomes regenerative.

A document, written by Baker Cahill’s art attorney and creative collaborator, Sarah Conley Odenkirk, appears on the artist’s website as an integral part of the project. It offers a “blueprint for engagement” with the project’s NFTs. The goal, Baker Cahill says, is that the document will provide a model for accountability among other artists and collectors.

But isn’t it an inherent contradiction that the climate-sensitive “Mushroom Cloud LA | Proximities” includes energy-sucking NFTs?

“That is true for Ethereum and proof-of-work-based blockchains,” Baker Cahill says, “where what it requires, in terms of computing power to authenticate those transactions, has an outsized impact on the environment.” As in Miami, she adds, “Mushroom Cloud LA | Proximities” “will be minted on the more environmentally friendly proof-of-stake blockchain, Algorand.”

For an environmentally conscious artist working in the NFT space, “nothing is perfect,” Baker Cahill admits. “I have minted the majority of my NFTs on proof-of-stake blockchains, with a very small minority on Ethereum, and they were 1-of-1 [editions].”

“Mushroom Cloud LA | Proximities” is nothing if not complex and high-tech, and yet the many different artworks that make up the project — the drawings, the video, the AR work — feel similarly visceral, almost tangible, and they share the same jagged marks seen in so many of Baker Cahill’s previous works on paper.

To make the video, she tore up old black-and-white graphite drawings, built a sculpture with the scraps of paper, 3D-scanned it, transferred it into Cinema 4D software, then lit and animated it on her computer.

To make the aerial AR work, she drew the images in virtual reality software, then her tech team at Shaking Earth Digital animated it.

“Everything I do starts with drawing,” she says.

The AR artwork over the ocean will be up for one month. The piece is site-responsive, so it will appear vastly different depending on the time of day it’s viewed — glimmering orange and gray against a vibrant sunset, silvery and luminescent against the night sky. Baker Cahill suggests downloading the app ahead of time and viewing the work from the end of the pier — an ADA-compliant spot, as opposed to the beach — because conceptually “it’s about everyone having access,” she says.

Baker Cahill plans to place a giant, spinning AR version of the “Fire Node” sculpture outdoors, over the Frieze art fair tent, a cue for visitors to head to the beach and engage with the “Mushroom Cloud” work.

For all of the piece’s doomsday heft, Baker Cahill encourages people to have fun with the AR work by the sea. When it debuted in Miami, “Mushroom Cloud” became collectively performative. Visitors took selfies with the work, crouching in faux fear or acting humorously nonchalant as the cloud swelled behind them.

“What I love about AR and public art is that everyone has a different relationship to it,” she says, “and everybody wants to write themselves into that story in a different way.”

Baker Cahill hopes the piece will eventually travel to other endangered waterways in other cities, such as Venice, Italy; Amsterdam; and New Orleans. All toward sending out a “constructive invitation,” through art, to build a better future.

“To truly dig into and confront — and, honestly, survive — these existential crises, we have to have some thread of hope,” she says. “Making things aesthetic is a way of inviting engagement.”

News Quiz: Do You Know The Biggest Stories For The Week Of Feb. 6? 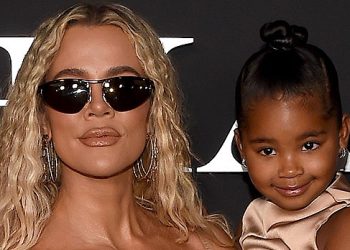