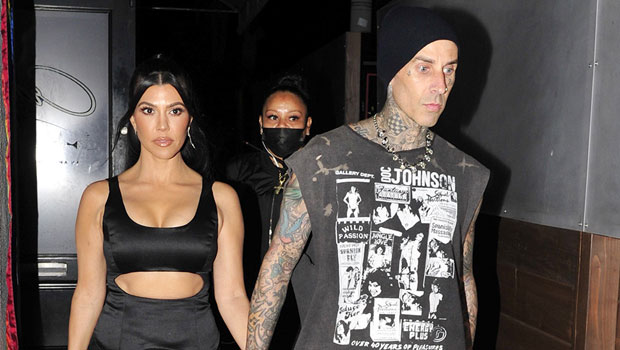 Kourtney Kardashian and Travis Barker are going to have the most epic wedding video ever! Sources tell HollywoodLife EXCLUSIVELY that they’ve agreed to let the cameras roll on the dream wedding in Italy, something that is sure to thrill Kravis fans! “Kourtney and Travis’s upcoming wedding will be filmed and parts of it will be used and appear on The Kardashians reality show,” an insider revealed.

“They know that they are both reality stars now, as Travis has appeared on nearly every episode,” continued the source. “Their storyline is a central focus and after some consideration, they both feel that they can’t have a wedding and not allow it to air. Their engagement was filmed and appeared in season one. They both thought that it was very tastefully done. Obviously, Kris is thrilled that they have agreed to allow this, and they are discussing making it the finale of next season. Needless to say, their cherished wedding video is going to be quite spectacular, and it won’t cost them a thing.”

As fans of the loved up couple know, the European extravaganza will be their third time exchanging vows. They first tied the knot after the Grammys in Las Vegas on April 3. But it turns out they didn’t actually get married during the secret wedding ceremony becuase they didn’t have a license. Since their Italian wedding won’t be legally binding, they made it official at the courthouse in Santa Barbara on May 15. Lucky fans will get to see snippets of all three affairs, according to a second source. “They have footage from Vegas and Santa Barbara and there will be footage from Italy too,” the source revealed. “The really great thing is that Travis totally gets it and doesn’t make waves and Kourtney‘s onboard too. She’s so incredibly happy and in love, she has no issues sharing some of her special days with the fans.”

Kourtney, 43, and Travis, 46, shared footage from romantic proposal at the Miramar Rosewood Beach hotel on season one of The Kardashians, on HULU, and fans are seriously invested in their love story. The couple, who have been longtime friends, took their relationship to the next level in October 2020 and quickly blended their lives — and families. Travis has two children, Landon Barker and Alabama Barker, from his marriage to Shanna Moakler. He’s also extremely close to his former stepdaughter, Atiana de la Hoya. Kourtney has three kids — Mason, Penelope and Reign  — with ex, Scott Disick.  On the May 19 episode of The Kardashians, the whole family got together for dinner and Kourtney gushed about how happy she is to bring the two sides together.  “I love the idea of a blended family. The more kids, the merrier. It’s more people to love. I am really close with Travis’s kids and I love them. It’s a beautiful thing.”

NASA is suspending all but the most urgent spacewalks after water was found in an astronauts helmet following a previous excursion. - Space.com