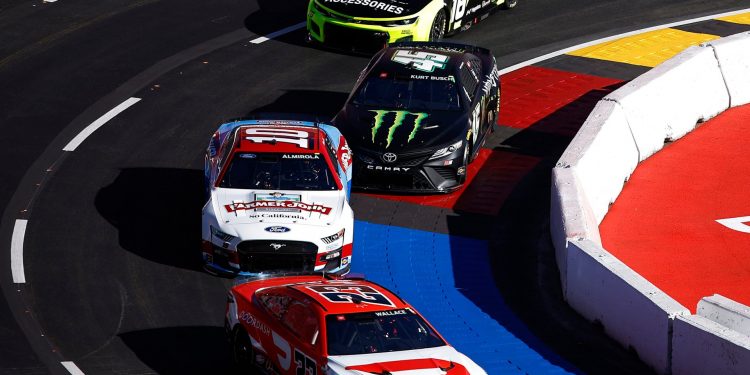 
After its winter break, NASCAR is preparing to return to action, with the Clash at the LA Coliseum. But why has NASCAR decided to tarmac over one of LA’s most famous landmarks?

Fresh of Kyle Larson’s domination of the 2021 Cup Series season, NASCAR is starting with a clean slate in 2022.

The Next Gen car debuts, drastically re-imagining what a stock car is.

It will be designed to lower costs through shared parts, and to entice that elusive fourth manufacturer into NASCAR – something it has been searching for since Dodge withdrew in 2012.

The car will make its competitive on-track debut as NASCAR heads to the LA Coliseum for the Clash – with the main event on Sunday, 6th February.

What is NASCAR doing at the LA Coliseum, what even is the Clash and will it affect the 2022 Cup Season?

The Clash – or Busch Clash to give it its proper title – is NASCAR’s traditional pre-season exhibition race.

After the off-season, it is NASCAR’s way of saying to the public ‘Hey, remember us? We’re still here and are starting again soon!’ or something like that…

Traditionally, the NASCAR Clash race takes place at Daytona – the week before the season-opening Daytona 500.

However, due to Super Bowl LVI being shunted back a week after the NFL calendar shake-up, it has forced NASCAR to re-jig its own plan.

The Clash therefore takes place on February 6th, with the 500 on February 20th – as to not clash with Super Bowl.

Why NASCAR is actually at the LA Coliseum

To tarmac over the Coliseum has cost NASCAR about $1 million and it will all be ripped up to return it to football ground status when the circus rolls out.

The aim is that by doing something different, in such an iconic location as the LA Coliseum, NASCAR will get more eyes on its product.

The LA Coliseum track is just a quarter-mile in length, making it one of the shortest tracks NASCAR has ever raced on.

With teams limited in their knowledge of the car and track, it is hoped that an exciting, door-banging, panel-bashing main event will lure in more fans.

The NASCAR Clash is a non-points event and will not count towards the points standings in the 2022 Cup Season.

The main event itself is due to start at 6pm ET on February 6th, with coverage on Fox Sports.

In other news, How to buy Kacey Musgraves’ star crossed merch amid 2022 tour

How To Grow Brugmansia Angel Trumpet Plants From Seed?

How To Grow Brugmansia Angel Trumpet Plants From Seed?