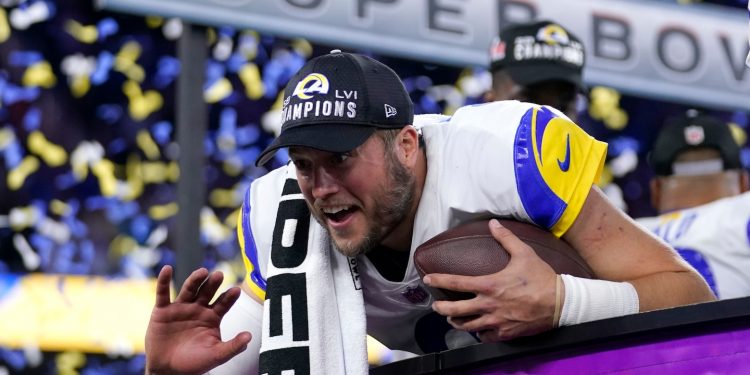 Once rooted in place, the NFL franchise quarterback has grown transient. A combination of teams’ enhanced desperation, players’ newfound choosiness and subtle shifts in the league’s financial structure has turned the offseason into a trading post for the most important, most glamorous position in professional sports.

In the past three offseasons, future Hall of Famers, No. 1 draft picks and onetime franchise pillars have swapped jerseys through trade or free agency. Two of them, Tom Brady and Matthew Stafford, promptly won Super Bowls. It once would have been hard to imagine Russell Wilson as anything but a Seahawk, Matt Ryan as something other than a Falcon or Deshaun Watson outside of Houston. All of them changed teams this offseason, hoping to join Brady and Stafford in finding instant success in an unfamiliar setting. Carson Wentz, a No. 2 draft pick once seen as the future in Philadelphia, has switched teams twice in two years, traded from the Eagles to the Indianapolis Colts to the Washington Commanders.

Owners and general managers once refused to part with their franchise quarterback before his twilight apart from the most unusual circumstances, such as when the Colts held the top draft pick, Andrew Luck was coming out of Stanford and Peyton Manning became a Denver Bronco after neck surgery. If they were willing, they frequently found no counterparts willing to pay an exorbitant price. There is now no price too high for a team that believes it can win, for reasons both rational and visceral.

“There’s about 18, 19 quarterbacks on the planet you legitimately can win with,” said former New York Jets and Miami Dolphins executive Mike Tannenbaum, now an ESPN analyst. “When you don’t have one, it creates a sense of urgency — you better go get one. Look at the AFC right now. You’d have no hope.”

The primacy of the quarterback is nothing new. But as the league has adopted rule changes that support pass-first offenses and aim to keep quarterbacks healthier, the position has only grown in importance. With opportunities opened by a generation of more aggressive general managers and sophisticated salary cap maneuvers, there is more urgency than ever to finding a quarterback — even if the targets must include previously untouchable players on other rosters. At the same time, even teams with established quarterbacks are constantly eyeing potential upgrades.

“So many things go into being able to do that — the salary cap room, what’s in the draft, what do you have behind that quarterback,” Kansas City Chiefs Coach Andy Reid said. “So I think they’re all different, all the situations. Bottom line is everyone needs a quarterback. If you’re going to be successful in today’s football, you need a quarterback.”

The past two Super Bowl winners ratcheted up the desire for both passers and teams to look around. Both acquired a veteran quarterback who had spent his entire career leading another franchise. Brady provided a template for quarterbacks when he ditched the New England Patriots in free agency after two decades and six Super Bowls, and the Los Angeles Rams offered a new model for roster management when they traded two first-round draft picks and Jared Goff, a 26-year-old quarterback who had been to the Super Bowl, for Stafford.

“This is a question of supply and demand, and there are not enough good quarterbacks to go around,” Commanders General Manager Martin Mayhew said. “… People are realizing now the importance of that position. It’s always been understood, but those were two great examples of what you can do when you have one.”

In Brady, quarterbacks saw the appeal of restarting their career in a new place with more talent around them and more influence over the direction of the franchise. In Stafford, teams could see the benefit of sacrificing future assets for the present and the difference an elite quarterback can make.

“Whenever Brady does something, everybody wants to copy the Brady way,” former New York Giants executive Marc Ross said. “Now that you had Stafford do it with the Rams, that kind of gives it even more validation. Teams are saying, ‘We could do this, too.’ You always needed a franchise quarterback to win. Now it’s not: ‘You just have to draft a guy and develop him, make him your guy.’ Now it’s: ‘Find that right team that the quarterback’s not in the right situation.’ ”

The Broncos found the right team this offseason, prying Wilson out of Seattle after he had played there for a decade and won a Super Bowl. Denver paid a haul of picks and contributing players for a 33-year-old quarterback. But in a division that already included Patrick Mahomes, Derek Carr and Justin Herbert, the Broncos had to choose between being helpless and being aggressive.

“You can ask all these guys around here,” Broncos Coach Nathaniel Hackett said at the league meetings, gesturing to a room full of NFL coaches. “You have to have a quarterback to have a chance. It’s whatever it takes to get a quarterback.”

Teams seek stellar play at quarterback, no longer content to settle for something serviceable. Before last year’s draft, the San Francisco 49ers sacrificed a package of draft picks to move up and select Trey Lance with the third pick. Coach Kyle Shanahan was presented with the notion that the move required ample future risk, especially when the 49ers already had Jimmy Garoppolo, a capable if unspectacular quarterback who had been to the Super Bowl. “There’s a risk any season you go into without a top-five QB,” Shanahan replied.

So why would a team such as the Seahawks this year or the Lions last year be willing to part with one? With new general manager Brad Holmes and first-year coach Dan Campbell, the Detroit Lions recognized they were years away from contention and had two decision-makers with job security who could plan for the future. The Seahawks went 7-10 last year and have lost the bulk of a roster that made them an annual contender in the 2010s. On top of a frayed relationship with Wilson, Seattle saw a needed opportunity to reset.

Tannenbaum sees in Seattle a possible model for teams at the low ebb of the contention cycle. Rather than keeping a franchise quarterback and restocking around him, they can use a quarterback to quickly fix a deficient roster, then look for a team in their current position to find their quarterback later. They are trying to be the Lions now so they can be the Rams in a few years.

“Their roster wasn’t built to win right now,” Tannenbaum said. “If you’re going to have to rebuild, your best asset to do that is obviously Russell Wilson.”

When a team can stomach the idea of trading a franchise quarterback, it will find a sea of willing trade partners. For one, it would be unusual for a team to ship out a quarterback soon after extending his contract, which means he’ll be near the end of his deal and therefore near the bottom of the market, given how contracts escalate based on established standards. And teams have grown so adept at adjusting to the salary cap that even exorbitant contracts are easy to trade.

“It would only be a handful of teams that would be so screwed up with their salary cap they would have trouble bringing in $20 million just on a whim,” said salary cap expert Jason Fitzgerald, who founded OverTheCap.com.

The degree of difficulty to create cap space has lessened, too, owing to changes from the 2011 collective bargaining agreement that are still reverberating. One factor in cap space growing so plentiful is the rookie salary scale. Teams no longer need to worry about setting money aside in case they have to pay a high draft choice. “If you ended up with a top-10 pick in the draft, those guys were getting paid like a superstar right off the bat,” Fitzgerald said.

The difference has been present for a decade. But it took years for those last enormous rookie contracts to cycle off teams’ books and another period of time for the league’s collective thinking to evolve with the new financial reality.

That 2011 CBA also allowed teams to roll over excess salary cap space rather than force them to spend it. Some franchise made it part of their strategy to keep extra room in case opportunities arose, which enables more teams to leap into quarterback derbies if a star grows disgruntled.

“The Browns most years would be carrying over $30 million, $35 million,” Fitzgerald said. “That affords them the luxury of having extra cap room when they go out there and make a trade to bring in Deshaun Watson.”

Franchise quarterbacks can make life easy both on the field and in the front office: They are talent magnets. Brady helped convince Tampa Bay’s entire starting lineup to return after the Buccaneers’ title. The Rams probably would not have won the midseason free agent bidding war for Odell Beckham Jr. with Goff instead of Stafford. When Reid was an assistant coach in Green Bay, Reggie White cited the presence of Brett Favre when he chose to sign with the Packers.

“That stuck in my head for a while,” Reid said. “Here’s the greatest defensive end to ever play the game and he’s holding up this huge check and he’s saying, ‘I came here because of the opportunity to win with Brett Favre.’ I think money helped, but the bottom line was he mentioned the quarterback. And that’s the truth. These guys that are looking in free agency that we get, we’re able to track has a lot to do with Patrick.”

Just because a team acquires a quarterback does not mean it has changed the franchise’s trajectory, as the Rams and Buccaneers did. The Commanders dealt two third-round draft picks and agreed to pay all $28 million in salary for Wentz, who has never won a playoff game and last year led an abject collapse as the Colts stumbled out of postseason contention. The Colts added Ryan for only a third-round pick, but he won seven games last season and will be 37 this season.

Whether quarterbacks will continue to switch teams at a frantic rate remains up for debate. The past three offseasons have seen several outliers. Brady changed teams at 43. Watson’s situation will not be repeated. He at first demanded a trade after a disagreement with ownership after signing a massive contract extension, and then he faced 22 accusations of sexual misconduct, which the Browns looked past when they awarded him a massive contract extension.

Many analysts have cast the quarterback movement as an example of NBA-style player empowerment coming to the NFL. But Brady moved in traditional free agency, Watson was traded only after allegations surfaced, and Wilson agitated for a trade last offseason but the Seahawks only dealt him this year, when he moved a year away from an expected contract extension.

“It’s less about player empowerment and more about where the contracts are going at that point in time,” Fitzgerald said.

Still, it’s possible the necessity of a great quarterback and the desperation of franchises will mean the impermanence of quarterbacks will only increase. Anytime a team is willing to part with its franchise quarterback, there will be somebody willing to pay whatever it takes, if not more, to acquire one.

“Teams will pay an extreme premium to get it,” Tannenbaum said. “So I think we’re going to see more of this, not less of it. If you don’t have [a franchise quarterback]other people will say, ‘That’s irrational; don’t pay it.’ But that’s a really, really bad feeling.”