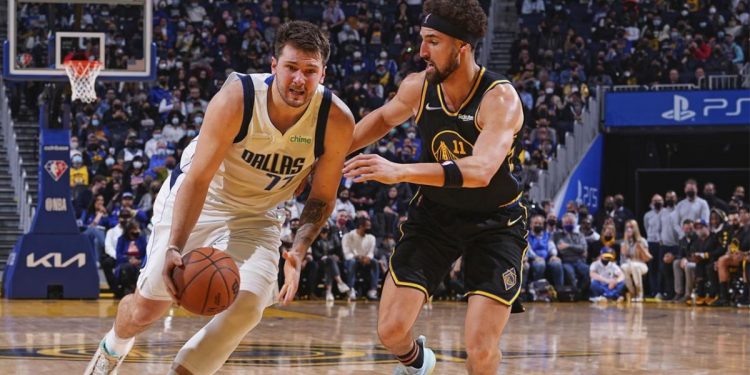 The Western Conference finals series between the Warriors and the Dallas Mavericks is a matchup maybe no one saw coming at the beginning of the season, but it will be full of excitement and mystery.

As both teams get ready for Game 1 Wednesday night at Chase Center, the NBA world has chimed in and given their bold predictions on the series.

Nick Wright presented one of the boldest we’ve heard so far: Mavericks take the series in five games.

Wright gave his take on Fox Sports 1’s “First Things First” and explained why he believes the Mavs will be trouble for Golden State.

“OK, everyone knows I’m going to say the Mavs here because of the foresight, the wisdom, the brilliance to pick the Mavs two months ago so why would I change now?” Wright said. “The question is how many games. The Warriors, to have any shot in this series, are going to need to come back from a 3-1 deficit because the Mavs are winning tonight. They’re winning both of the two in Dallas. It’s going to be 3-1 going back to San Francisco and it’s not going back to Dallas after that except for the NBA Finals. Mavs in five.”

Dallas is coming off a very competitive, hard-fought seven-game series against the Phoenix Suns and will play the first two games of the West finals in front of an eager, loud Dub Nation.

But to Wright, that doesn’t matter.

Golden State lost three of the four games it played vs. Dallas in the regular season this year. Of course, everyone knows the playoffs are a whole different beast.

Still, Steph Curry’s rare stats when playing against the Mavs are pretty telling. Curry shot just 5-of-24 from the field and 1-of-9 from deep in the Warriors’ first battle of the season vs. the Mavs, a 99-82 loss on Jan. 5.

Twenty days later, Curry shot 2-of-10 from the 3-point line and only 7-for-16 from the field in the Warriors’ lone win over Dallas this season.

“This is a terrible matchup for Golden State,” Wright said. “I bet you Golden State was rooting for Phoenix. They watched Steph’s single worst opponent this season was Dallas. The problem for the Warriors, and the reason this matchup is so awful, is they’re not going to be able to hunt Luka [Doncic] because Luka will have his choice of who he wants to guard.

Another reason Wright is so confident the Warriors will struggle this series is because of their lineup.

After experimenting with a couple of different rotations, it’s unclear who Warriors coach Steve Kerr will start with and who he will depend on to close out games.

Wright sees an issue with whoever Kerr and the Warriors decide to put on the floor.

“With Draymond [Green] and [Kevon] Looney on the court at the same time, here’s the problem for Golden State,” Wright said. “Their fifth guy is going to cripple them in this series no matter which fifth guy they go with. So you’re going to Steph, Klay [Thompson], [Jordan] Poole, Draymond [Green] as your crunch time four. Who’s your fifth? If you go Looney, then you have two guys that do not need to be guarded on offense in Draymond and Kevon Looney. If you go [Andrew] Wiggins, then your only rim defender, Draymond, is also the only guy who has any shot of being able to guard Luka, and you will draw him away from the basket.

“We have seen the Warriors beaten by people hunting Steph, Steph is not the guy that they’re going to try to hunt. Jordan Poole’s going to need to average 25 a game to be a break-even player. Luka’s going to pick him out and torture him … It’s a brutal matchup for Golden State. They’re going to need Steph to have the best playoff series of his career for them to win this series. That’s not going to happen, the Mavs are the better team. They dominated them in the regular season, they have the best player, they’ve been better in these playoffs.”

But the Warriors are pretty good at blocking out the outside noise and focusing on the prize. After all, this isn’t their first rodeo.

Inside the last-minute Trump endorsement that enraged Pa. Republicans - POLITICO