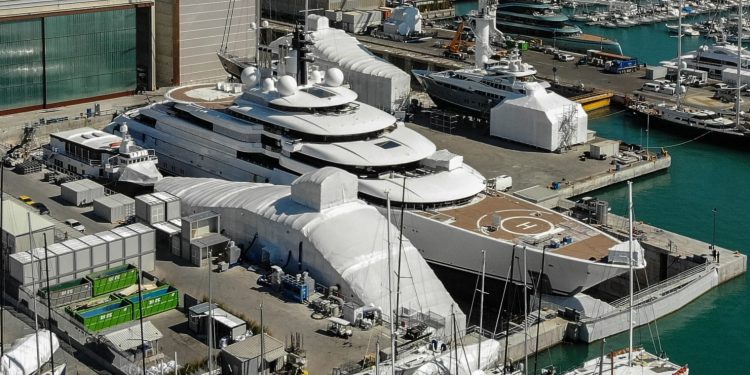 ROME—For the last two weeks, Russian oligarch watchers have had their eyes on the Scheherazade mega yacht docked in the posh Marina di Carrara in northern Tuscany. There are growing suspicions that the $700 million, six-deck super-luxurious vessel—with its two helicopter pads, various swimming pools, his-and-hers beauty salons and gold fixtures that would make Donald Trump jealous—belongs to Vladimir Putin.

Until two days ago, its Russian crew, led by British captain Guy Bennett Pearce, whose mother told the Daily Telegraph her son would “never work for a murderer,” didn’t leave the ship. But The Daily Beast has learned that all that changed this week when the Russian crew disappeared overnight, replaced by an entirely British set, who, despite Brexit constraints that would require work visas, seem to have descended out of nowhere.

The crew change caught the attention of Italy’s General Confederation of Labor, which confirmed to The Daily Beast that the Russians are gone. “Yes, they were all Russians until a few days ago,” Paolo Gozzani, secretary of the confederation, told The Daily Beast. “Today the crew is made up entirely of English. We are monitoring the situation inside the shipyards but not because I care whether it is Putin’s or not: I am worried about the repercussions that a seizure, or a freezing of assets, could have on the shipyard workers.”

Italian financial police, who have already confiscated millions of dollars worth of yachts, villas, and bank accounts tied to sanctions against Russia, are working to untangle reams of documents that may or may not link the ship to Putin. Marianna Ferrante, spokesperson for the Italian Sea Group that manages the port, says the ship arrived about a year ago to be refitted. She says it does not belong to Putin—at least not directly.

But Russian opposition leader Alexei Navalny says it does. His research team published a video they say proves the yacht belongs to Vladimir Putin, a sentiment shared by U.S. intelligence officials after The New York Times reported alleged ties to the Russian president.

The area where the Scheherazade—named after a key female character in Middle Eastern tale One Thousand and One Nights—is as close to Little Russia as anywhere in Italy. The port is lined with designer shops and a magnet for Russian tourists who flock to Forte dei Marmi resort, which hosts around 500 Russian “regulars” each summer, according to the local tourist board, which says most have cancelled for the upcoming season. In 2010, the residents petitioned to stop Russians from pushing out the locals, but in the end, the Russian Ruble won out and most of the port workers speak enough Russian to accommodate the numerous Russian yachts that are docked there most of the long Italian summers. The port authority said all the Russian yachts disappeared months before Russia’s invasion of Ukraine. All but the Scheherazade, which is currently the only vessel in Italian waters without a distinct owner, according to the Italian Financial police.

Francesco De Pasquale, the mayor of Carrara, has grown weary of the interest in the mega ship. He and the leaders of the Italian Sea Group have issued a joint statement denying Putin is the owner. “According to the documentation available to the company and following what emerged from the checks carried out by the competent authorities, the 140-meter yacht Scheherazade, currently under construction for maintenance activities, is not attributable to the property of Russian President Vladimir Putin,” says the statement, also sent to The Daily Beast.

But the port also conceded that if the Scheherazade were to be seized, it would be disastrous for the port’s 400 workers who have already invested hundreds of hours and materials in the mega yacht refit. “Inside the yard, 400 direct workers and another 200 work in the related industries,” union leader Gazzoni says. “If the yacht, which has been carrying out refitting operations for weeks now, were seized it would be a disaster, an immense impact on the work of the workers; the seizure would freeze a huge area of ​​the construction site, who knows for how long, and would prevent new work from coming in.”

Are these wall cracks concerning? : RealEstate

Are these wall cracks concerning? : RealEstate