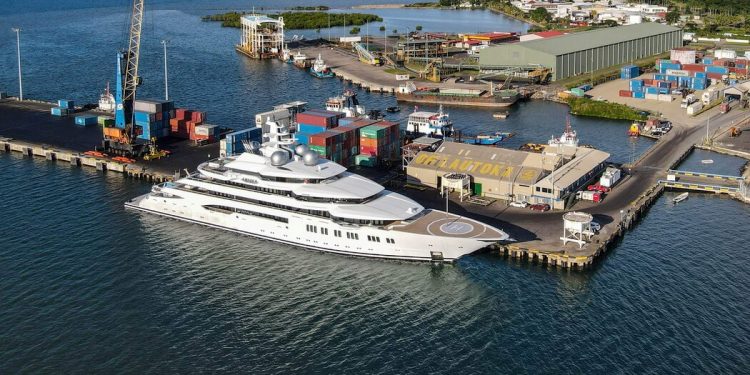 The U.S. government was so pleased with its swift seizure of a Russian oligarch’s 255-foot yacht on the Mediterranean island of Majorca last month that it posted a video on YouTube of the moment F.B.I. agents and Spanish authorities clambered up the gangplank. The $90 million yacht owned by Viktor Vekselberg, called the Tango, was the government’s first big prize in a campaign against billionaires with close ties to the Kremlin.

The Tango is just a sliver of the $1 billion in yachts, planes and artwork — not to mention hundreds of millions in cash — that the United States has identified as belonging to wealthy allies of Russia’s president, Vladimir V. Putin, since the invasion of Ukraine. U.S. Magistrate Judge Zia M. Faruqui, who approved the seizure, called the pursuit of the yacht by a new Justice Department team called task force kleptocapture “just the beginning of the reckoning that awaits those who would facilitate Putin’s atrocities.”

The reckoning may take a while.

Seizing assets, whether a yacht or a bank account, is the easy part. To permanently confiscate them, the government must usually navigate a potentially cumbersome process known as civil forfeiture, which requires proving to a judge that the assets were obtained from the proceeds of a crime or through money laundering. Only then does the government actually own the assets, and have the power to liquidate them.

All that can take years, especially if the former owner is inclined to fight the forfeiture action in court.

Hoping to speed things up — and quickly get the proceeds from seized assets turned over to the Ukrainian government — the White House announced a plan last week that would make it easier for U.S. authorities to go after some oligarch assets through an administrative procedure led by the Treasury Department. Although it has not provided details of its plan, administration officials said the new procedure will provide adequate due process and allow for an “expedited” review by a federal court.

The White House proposal would significantly change the way the government handles high-dollar asset seizures. Generally, administrative forfeiture is used in lower-profile cases, intended for assets worth $500,000 or less. Such efforts are not really designed for luxury homes or massive yachts, let alone the huge sums of money that wealthy Russians are believed to have stashed away in U.S. bank accounts or invested with hedge funds and private equity firms.

“The idea of a yacht or jet valued in the hundreds of millions seized and liquidated administratively is new territory,” said Franklin Monsour Jr., a former federal prosecutor and a white collar defense lawyer with Orrick in New York.

Mr. Monsour said the administration and Congress may be banking that many Russian oligarchs will not muster a legal challenge to a new, expedited process because that would risk subjecting themselves to U.S. jurisdiction.

“It will likely be without challenge,” he said. “And the government knows that.”

Even if prosecutors are forced to proceed in some cases through the more typical civil forfeiture process, the litigation might go faster than normal for that same reason, Mr. Monsour said.

There are indications the pace of seizures is picking up. On Thursday, prosecutors said that authorities in Fiji working with the task force seized a $300 million mega yacht belonging to Suleiman Kerimov, a Russian gold magnate. But in a sign the task force may be unwilling in some cases to expose its tradecraft in tracking down assets, the 24-page affidavit presented to a federal judge in support of the seizure was heavily redacted.

The more pricey assets the government seizes, the more reason it has to speed up the forfeiture process: Luxury property must be properly maintained, otherwise their value will drop before they can be sold off to someone else in the small pool of people who can afford them.

“For yachts that are languishing in ports, there will be assets spent to maintain the vehicles,” said Daniel Tannebaum, an expert on financial crimes at the consulting firm Oliver Wyman and former Treasury official. “Some of these assets can sit for an extremely long time.”

But authorities in the U.S. are looking to do more than just strip oligarchs of their prized possessions. Elizabeth Rosenberg, assistant secretary for terrorist financing and financial crimes at Treasury, said one goal is to “undermine the financial architecture that Russia uses to move money.”

Over the years, Russia and its oligarchs have become skilled at using a parade of shell companies in places like the British Virgin Islands to move money from Cyprus to the Cayman Islands to Jersey, in the Channel Islands, all places with a history of being seen by investors as tax havens. The task force will be looking for evidence of oligarchs taking steps to illegally evade sanctions by surreptitiously transferring money and property to an unsanctioned person or business entity.

Just last month, federal prosecutors in Manhattan filed criminal charges against Konstantin Malofeyev for illegally transferring $10 million from a U.S. bank to a business associate in Greece. Mr. Malofeyev, who recently described Russia’s invasion of Ukraine as a “holy war,” was the subject of a sanctions order by the Treasury Department in 2014 after Russia’s invasion of Crimea, a part of Ukraine that it ultimately annexed.

In October, federal agents raided a mansion belonging to Russian billionaire Oleg Deripaska in Washington and seized a wide array of assets including a Diego Rivera painting. Authorities took action in response to suspicions that Mr. Deripaska had been trying to evade sanctions by moving some of his money around, Bloomberg reported last month.

U.S. authorities have pursued assets belonging to Mr. Deripaska, an industrialist with close ties to Mr. Putin, since a sanction order in 2018 that was partly in response to Russia’s meddling in the 2016 presidential election. A year later, Mr. Deripaska sued the U.S. government, claiming that the sanctions designation was based on rumor and had rendered him “radioactive” in the business community. Six weeks ago, a federal appellate court rejected his claims.

A far-reaching conflict. Russia’s invasion on Ukraine has had a ripple effect across the globe, adding to the stock market’s woes. The conflict has caused​​ dizzying spikes in gas prices and product shortages, and is pushing Europe to reconsider its reliance on Russian energy sources.

Global growth slows. The fallout from the war has hobbled efforts by major economies to recover from the pandemic, injecting new uncertainty and undermining economic confidence around the world. In the United States, gross domestic product, adjusted for inflation, fell 0.4 percent in the first quarter of 2022.

Russia’s economy faces slowdown. Though pro-Ukraine countries continue to adopt sanctions against the Kremlin in response to its aggression, the Russian economy has avoided a crippling collapse for now thanks to capital controls and interest rate increases. But Russia’s central bank chief warned that the country is likely to face a steep economic downturn as its inventory of imported goods and parts runs low.

Trade barriers go up. The invasion of Ukraine has also unleashed a wave of protectionism as governments, desperate to secure goods for their citizens amid shortages and rising prices, erect new barriers to stop exports. But the restrictions are making the products more expensive and even harder to come by.

Prices of essential metals soar. The price of palladium, used in automotive exhaust systems and mobile phones, has been soaring amid fears that Russia, the world’s largest exporter of the metal, could be cut off from global markets. The price of nickel, another key Russian export, has also been rising.

Since Russian forces invaded Ukraine in February, the Treasury Department has imposed sanctions on more than 530 well-connected Russians. Andrew Adams, the federal prosecutor directing the new kleptocapture task force, said much of his team’s early work has involved “unprecedented” sharing of information about those individuals with U.S. financial firms, Treasury officials and overseas law enforcement groups.

Even without taking possession of an asset, the task force can make it difficult for the owner to make use of it, said Mr. Adams, a veteran federal prosecutor in Manhattan who has focused on money laundering and asset forfeiture cases.

“In the past, I would consider a win to be getting a conviction,” Mr. Adams said. “Now it could be getting an insurance company to cancel policy coverage for an oligarch’s yacht.”

Although it’s possible for the government to seize assets as part of a criminal case, Mr. Adams said, the government was unlikely to take that route. Doing so would require the arrest and conviction of their owners — an even more daunting process than the civil process or the expedited administrative procedure that the White House is considering.

But even the civil forfeiture process requires the government to show evidence of criminal conduct.

In approving the seizure of the Tango, Judge Faruqui said federal authorities had shown probable cause that Mr. Vekselberg had purchased the yacht — held through a series of shell companies — with “illicit proceeds and laundered funds.” Permanent confiscation will require prosecutors to establish that Mr. Vekselberg actually committed bank fraud, money laundering or some other crime.

Although the United States imposed sanctions on wealthy Russians soon after the invasion, global efforts to seize their assets have mostly played out in Europe and the Caribbean.

The European Union has frozen about $30 billion assets traced to Russian oligarchs since February. A few weeks ago, British officials said they had frozen some $13 billion in assets tied to just one of them: Roman Abramovich. Mr. Abramovich, one of Russia’s wealthiest men and the longtime owner of London’s Chelsea Football Club, has faced significant pressure from British officials. He agreed to part with the team in March as officials were moving to impose sanctions, and the club said on Friday that it had accepted a $3 billion bid from a consortium of buyers. The proceeds from the sale — the highest price in history for a sports team — will be placed in a frozen British bank account.

Mr. Abramovich, who has invested billions of dollars with offshore funds managed by U.S. firms and has an interest in several steel mills in the United States, has not been sanctioned by American officials, in part because he has served as an intermediary in negotiations between Ukraine and Russia. Mr. Adams, the leader of the kleptocapture task force, declined to discuss the matter.

But he did offer an explanation for why the Russian oligarchs his team is focused on seem to have fewer assets in the United States than in other countries: The sanctions that Treasury imposed following Russia’s invasion of Crimea seven years ago scared some away.

“We have had sanctions in place since 2014,” said Mr. Adams. “We have not been a friendly country to park your money in.”