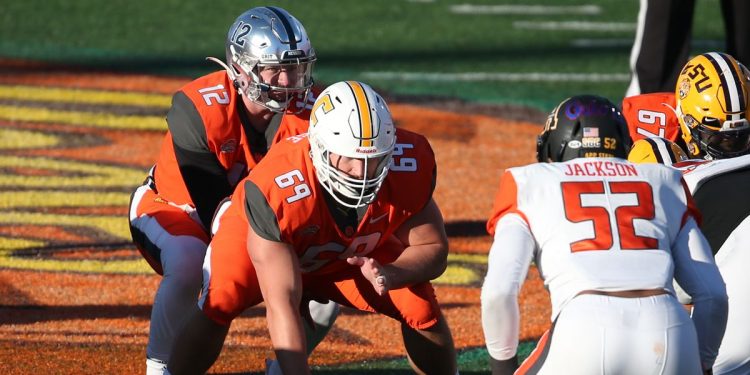 New England selected the Chattanooga guard at No. 29 overall.

Strange would mark the ninth offensive line prospect off the board Thursday. He would also mark the first Mocs prospect to be drafted by the Patriots during Bill Belichick’s tenure as head coach.

Trading down from No. 21 overall with the Kansas City Chiefs, the exchange netted additional capital for the war room in the third and fourth rounds at No. 94 overall and No. 121 overall, respectively. And a surprise from the Southern Conference.

Here’s an initial look into why.

A quick-footed 44-game starter at the FCS level

A flip from Air Force as well as the defensive side of the ball, Strange went on to make 44 starts at Chattanooga after redshirting in 2016. Appearing in 49 games altogether, he finished his FCS career as a team captain with first-team All-SoCon and first-team All-American honors.

Invitations to the Reese’s Senior Bowl and NFL Scouting Combine followed for Strange, who became the second player in program history to tick both boxes behind past undrafted New England defensive lineman Keionta Davis.

While in Mobile, Strange rotated in at center. And while in Indianapolis, he ran the three-cone drill in 7.44 seconds and the short shuttle in 4.5 seconds. Only a handful of participating offensive linemen posted faster times in those agility tests. At a listed 6-foot-5 and 307 pounds, his 120-inch broad jump stood atop the position group.

Making a move against the consensus

Strange checked in as the No. 76 overall prospect on the consensus big board assembled by Arif Hasan of The Athletic. He also checked in with a third-round grade in Dane Brugler’s draft guide.

But Pro Football Focus charted Strange for allowing one sack, one hit and three hurries across 311 snaps in pass protection last campaign. And on Thursday night, he found himself eclipsing Hall of Fame wide receiver Terrell Owens, a third-rounder in 1996, as the highest-drafted Chattanooga product.

“He wouldn’t have lasted much longer,” Belichick told reporters of Strange during his recap video conference.

Penciling in as a rookie starter for New England

Last fall, Senior Bowl executive director Jim Nagy described Strange as “the type of after-whistle finisher who gets under people’s skin.” That matched a need for the Patriots on the interior.

Strange, who will turn 24 as training camp opens in late July, logged 42 of his starts at left guard. He also got the nod once at left tackle and once at the pivot for the Mocs.

How would you grade the Patriots’ selection of G Cole Strange at No. 29?