Wi-Fi may be coming soon to a lamppost near you 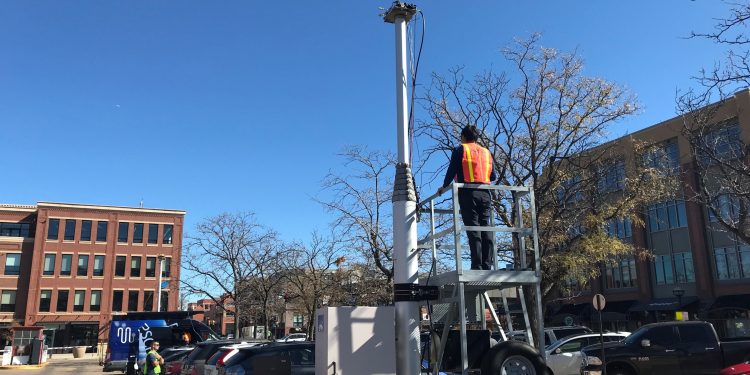 
As Wi-Fi is deployed more widely in cities, and perhaps at higher frequencies, it may depend on an abundant urban asset: streetlight poles.

To help ensure these networks work well, researchers at the National Institute of Standards and Technology (NIST) have developed and verified a novel model that will help wireless communications providers analyze how high to attach Wi-Fi equipment to light poles.

In general, the NIST team found that the optimal height depends on transmission frequency and antenna design. Attaching equipment at lower heights of around 4 meters is better for traditional wireless systems with omnidirectional antennas, whereas higher locations 6 or 9 meters up are better for the latest systems such as 5G using higher, millimeter-wave frequencies and narrow-beam antennas.

An international group, the Telecom Infra Project, is promoting the idea of making Wi-Fi available over the unlicensed 60 gigahertz (GHz) frequency band by installing access points on light poles. A technical challenge is that signals in this band, which are higher than traditional cellphone frequencies, are sparse and tend to scatter off rough surfaces.

Until now, measurements of 60 GHz urban channels have produced limited data. NIST developed a channel model for tracking transmissions that recognizes the sparse, scattering features of these signals and uses a novel algorithm for analyzing the measured paths that extends beyond the usual parameters of signal delays and angles to include receiver locations. The model’s prediction accuracy is comparable to that of more complicated methods.

NIST researchers traveled to downtown Boulder, Colorado, to test their model against actual channel measurements. The measurements were recorded at 4, 6 and 9-meter antenna heights to investigate the tradeoffs. The model matched real-world measurements very well.

“We verified the model we developed and used measurements from downtown to prove this point further,” said Derek Caudill, an electronics engineer who worked on the project at NIST. “This work shows that by using our model, someone like a cell provider can account for various advantages and disadvantages of 60 GHz access points and signals on light poles in urban environments.”

The team used custom NIST equipment called a channel sounder, with a stationary transmitter mounted on a mast and a mobile receiver on the roof of a van. The transmitter and receiver are both topped with an array of electronically switched antennas with defined 3D radiation patterns. The sounder can precisely measure many radio channel characteristics and has a unique ability to measure the time dynamics—how the properties of the waves change over time as the receiver moves—of a millimeter-wave channel even when in motion.

The researchers were especially interested in data on how signals spread across physical space. Large spreads are generally considered bad as they indicate multiple received signals and more interference. It is generally better to have one clear path for communication.

“Our data show that those spreads are wider at higher heights,” NIST engineer Jelena Senic said. “This means that with fewer obstructions between transmitter and receiver, the power is more distributed in space.”

For conventional wireless systems with omnidirectional antennas, the smaller spreads are preferable to avoid interference, which means Wi-Fi equipment should be mounted at lower heights on lampposts.

“However, the next-generation wireless systems will operate at millimeter-wave frequencies and should employ highly directional antennas with very narrow beams, or pencil beams,” Senic said. “With this configuration, transmitter and receiver will steer their narrow beams in order to find the best possible link; that is, the propagation path that has maximum power. In this case, a higher angular spread is preferable because it will provide diversity in space; that is, transceivers will have the ability to steer beams in more directions in order to find the best link.”

NIST researchers went a step further and recorded the measurement data on the NIST campus to validate that the new model could be applied to different environments. Results on campus were comparable to downtown, substantiating that the model can be generalized to different environments and use cases. The study appears in IEEE Antennas and Wireless Propagation Letters.

Provided by
National Institute of Standards and Technology

Vietnamese man, 24, needed to get a 2cm-thick steel nut DRILLED off his strangled penis – Daily Mail

Vietnamese man, 24, needed to get a 2cm-thick steel nut DRILLED off his strangled penis - Daily Mail