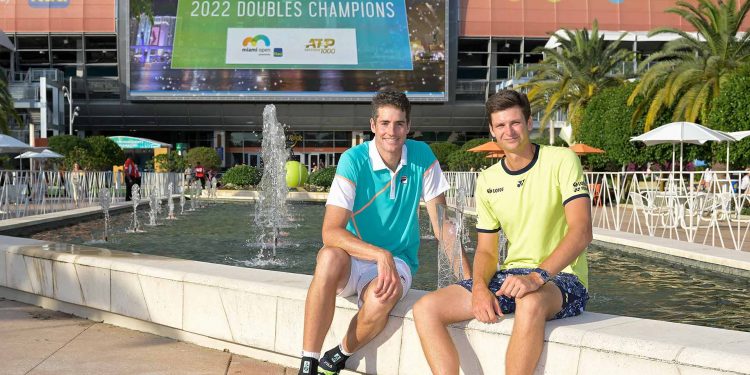 
Wild cards Hubert Hurkacz and John Isner defeated one of the hottest doubles duos on the ATP Tour to claim the title at the Miami Open presented by Itau on Saturday afternoon.

Teaming for the first time in 2022, the Polish/American pairing scored a 7-6(5), 6-4 victory over Wesley Koolhof and Neal Skupski. The victory completed a Sunshine Double for Isner, who won the Indian Wells title with compatriot Jack Sock two weeks ago.

“It certainly feels good, but I partnered up well,” said Isner, who is just the second man to complete the double with different partners (Jakob Hlasek, 1989). “You guys saw that last game. It was 40/30 them, I didn’t hit a single ball and we won the match.

“It’s a pleasure playing with Hubi. He does so many things so well as we know, and he’s got so much doubles skill also. It’s so much fun for me.”

The duo defeated three Grand Slam title-winning teams on the way to the final (Krawietz/Mies, Ram/Salisbury, Kokkinakis/Kyrgios), and dropped Koolhof and Skupski to 23-5 on the season after they won three ATP Tour titles in their first six matches as a team.

“I think John is the hottest doubles player on Tour right now,” said Hurkacz. “It definitely was a fun week. Playing with John is such a pleasure so we had a great time.”

He later added: “I love Miami a lot. I was able to win singles last year and now playing with John doubles. This place is very special for me.”

Both Hurkacz and Isner are former singles champions in Miami, with the Pole winning in 2021 and the American in 2018. Hurkacz’s Saturday success made it two trophies on the day for Poland inside Hard Rock Stadium, as Iga Swiatek defeated Naomi Osaka in the women’s singles final earlier in the day.

The Polish/American pairing made their moves late in both sets. Twice down a mini-break in the opening set tie-break, the duo won five of the last six points to pocket the first stanza. In set two, after saving three break points at 1-1, they earned a decisive break on a sudden-death point that doubled as a match point on the Koolhof serve.

That was the only loss of serve on seven break points in the match. Hurkacz and Isner appeared to have secured a break at 30/40 in the ninth game of the opening set, but Isner called foul on himself after a stray touch of the ball prior to a drop-volley winner from his partner. The duo piled more pressure on their opponents in the tie-break with strong returning and aggressive net approaches, forcing some crucial errors as thy sealed the set.