Wild mustard fields can be dazzling — and devastating 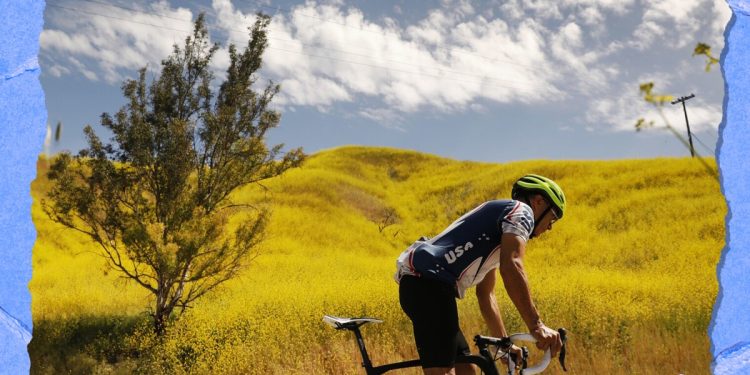 
By Mary Forgione
Design and illustrations by Micah Fluellen

It’s wildflower season, which always makes me happy — and a little conflicted. Social media posts sometimes show photos of gorgeous yellow fields of head-high … mustard. “Stumbled upon a wild mustard field like a dream,” reads the caption of one Instagram shot of a field in Half Moon Bay, Calif.

Sure, mustard fields can be dazzling, but at what cost?

Black mustard, or Brassica nigra, is an invasive plant that “germinates early in winter before native plants have taken hold, shoots up more than 6 feet tall, hogs the sunlight with its thick stalks and lays down a deep system of roots that beats out native plants for water,” according to this L.A. Times story. And it’s everywhere in Southern California.

I emailed David C. Bryant, director of visitor experience at the California Botanic Garden in Claremont, about my desire to write about mustard. “Maybe the title could be ‘Super bloom? Try super doom.’ LOL — maybe too much.”

Joking aside, the weed has dramatically changed SoCal’s landscapes for the worse. “We’ve essentially replaced hillsides that once ‘super bloomed’ with poppies, lupines, goldfields and countless other native beauties that all supported a vast web of life with … mustard (and other rampant invasives),” Bryant wrote.

And the weed has a darker side too. “The spread of black mustard can increase the frequency of fires in chaparral and coastal sage scrub, changing these habitats to annual grassland,” reads the California Invasive Plant Council’s website. Botanists and ecologists working in the Santa Monica Mountains worry that mustard’s dried-up stalks could become kindling and help spread blazes like the 2018 Woolsey fire, which scorched more than 88% of the Santa Monica Mountains National Recreation Area.

One way to turn that around: Remove invasive plants from the wild while “repurposing them into something beautiful, edible and sustainable in the process,” Bryant wrote. “Many invasive plants — mustards, fennel, Spanish broom — have great uses: food, dyes, you name it.”

In the meantime, enjoy the yellow fields, but understand the dangers lurking within.

4 things to do this week

1. Look for wildflowers on a guided walk in an O.C. canyon. Peters Canyon in Orange was once known as “Canyon of the Frogs” because its waters drained into a frog-friendly marsh now known as Upper Newport Bay. Today the canyon’s park, formerly cattle-grazing grounds, retains freshwater marsh and grassland habitats. Take a free guided hike from 8 to 9:30 a.m. Monday amid cottonwoods, willows and eucalyptus trees to look for spring wildflowers. The hike covers about three miles; advance registration required.

2. Hey, kids, want to learn to be a lake lifeguard? Junior Lake Lifeguard training for 9- to 17-year-olds doesn’t kick off until the summer, but mandatory tryouts for the three-week course are held in April at aquatic centers in Arcadia and Castaic. Participants learn first aid, CPR, water rescue skills and other water safety techniques and receive mentoring from experienced lifeguards. Program sessions are held mornings or afternoons Mondays through Thursdays at Castaic Lake State Recreation Area in Castaic, Frank G. Bonelli Regional Park in San Dimas and Santa Fe Dam Recreation Area in Irwindale. Course costs $350, which includes uniforms.

3. Spot gray whales from land during a festival dedicated to their annual migration. Pacific gray whales are traveling north from Mexico right now to reach their summer feeding grounds in Alaska. Some travel close to shore at Point Vicente on the Palos Verdes Peninsula, a place where volunteer spotters with high-powered scopes count them from December through May. The L.A. Chapter of the American Cetacean Society, which co-sponsors the count, collects data to monitor “seasonal usage of the nearshore migratory path, and documents changing trends over time.” Learn more about the program and the whales at the Whale of a Day festival 10 a.m. to 4 p.m. Saturday at the Point Vicente Interpretive Center. Children’s games, crafts, puppet shows and live music will be part of the free fest, as well as a chance to see whales. The festival took a two-year break because of the COVID-19 pandemic and returns for its 37th year. (No on-site parking; take a free shuttle from Rancho Palos Verdes City Hall at 30940 Hawthorne Blvd.)

4. Try a back-country emergency safety app — on us. Readers of the L.A. Times and The Wild can sample a new app that puts wilderness medicine information and experts at your fingertips — for free. Global Outdoor Emergency Support, or the GOES Health App, is offering free six-month subscriptions exclusively for our readers. Here’s how it works: Access trip planning and emergency safety advice, whether you’re online or offline (you can use it in the backcountry even if you don’t have a cell signal), and call or text emergency-medicine doctors 24/7 when you have service, no matter where you are in the world. Download the app and enter the voucher code LATimesBenefit for the free subscription.

What’s so bad about feral pigs in California? Plenty. The 150- to 500-pound creatures are “like roving rototillers, using their snouts and hooves to unearth dirt-dwelling insect larvae and eat acorns, invertebrates, eggs, small mammals and plants,” according to this L.A. Times story. “Their feeding patterns not only cause enormous ecological damage, but the end product — their poop — poses an even further threat.” Pigs now inhabit 56 of the state’s 58 counties (only San Francisco and Alpine counties have been spared.) Getting rid of them is even harder. Catalina Island successfully eradicated feral pigs more than a decade ago by using measures that included shooting them from helicopters, which drew the ire of animal rights groups. Now Santa Clara County is looking for ways to get rid of pigs living in its parks. (These pigs are descendants of those brought over by the Spanish in the 1700s, which then bred with wild boar introduced in the 1920s.) The state is also stepping in with a bill to make it easier and cheaper to hunt pigs, which may or may not help solve the problem.

I love the way outdoors writer Brian Clark describes how he enjoys California’s snowpack two times each year: “Once in the winter when I went skiing, and then again in the spring and summer when the snow melted and tumbled down from the Sierra in rivers — with rapids ready for rafting.” Even in a drought year (this year’s snowpack is a dismal 35% of average normal years), rivers are ready for their summer moment, especially the Tuolumne and American, which are backed up by water-storing reservoirs. Here’s why now is the time to book your whitewater rafting trip on these eight rivers.

Last week, I wrote about areas of the Angeles National Forest reopening about 60% of the burn area that had been shut for two years because of the Bobcat fire. Now there’s more good news. Popular routes such as Forsee Creek and San Bernardino Peak trails in the San Bernardino National Forest also opened April 1. The areas had been closed because of the El Dorado fire that started Sept. 5, 2020. “Over a 23-day period, the fire burned 22,680 acres in the Oak Glen / Yucaipa Ridge area and within the San Gorgonio Wilderness Area of the San Bernardino National Forest,” according to InciWeb. Day and overnight permits are required in the San Gorgonio Wilderness; here’s how to get them online.

Betty Reid Soskin, the oldest working National Park Service ranger in the U.S., is retiring at 100 years old. She was known for presenting an interpretive program at Rosie the Riveter/WWII Home Front National Historical Park in Richmond, Calif. Soskin talked about what working-class Black families did during World War II, stories that enriched the picture of what was happening on the homefront when America was at war. She had a hand in shaping the national park established in 2000. “Being a primary source in the sharing of that history — my history — and giving shape to a new national park has been exciting and fulfilling,” Soskin said in a statement. “It has proven to bring meaning to my final years.” Goodbye, Betty. We’ll miss you.

Click to view the web version of this newsletter and share it with others, and sign up to have it sent weekly to your inbox. I’m Mary Forgioneand I write The Wild. I’ve been exploring trails and open spaces in Southern California for four decades.