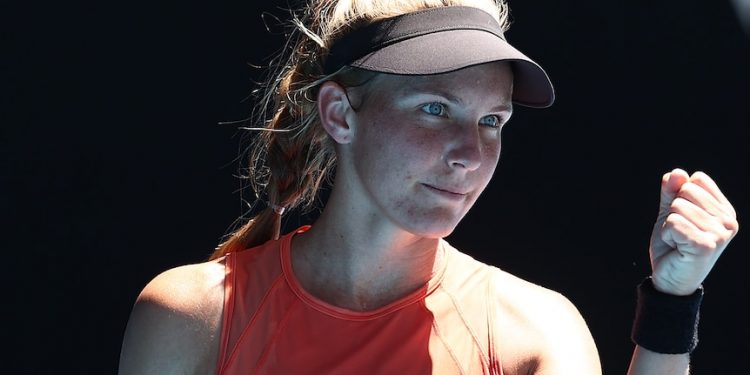 
Maddison Inglis’s inspired run at the Australian Open has come to an end, with the local wildcard going down in three sets to Estonia’s Kaia Kanepi.

Inglis — ranked 133 in the world — had never won a singles match at a major until this week and she appeared on the verge of causing an upset against Kanepi when she won the first set.

Inglis’s loss leaves world number one Ash Barty as the only Australian left in the women’s main draw.

The 24-year-old from Perth provided a compelling storyline in the first week of the Open, having stunned US Open finalist Leylah Fernandez with a straight-sets win in the first round.

She defeated American qualifier Hailey Baptiste to reach the third round, but beating Kanepi — who has been ranked as high as 15 in the world — proved to be a challenge too far.

Inglis will enjoy a significant rankings boost following her showing at Melbourne Park, while she will be $221,000 richer as reward for making the last 32.

She had only earned $530,715 in career prize money prior to the tournament.

In the first set, Inglis showed no signs of being overawed facing Kanepi on Melbourne Park’s centre court, with the temperature hovering above 30 degrees Celsius.

She burst out of the blocks in the opening set, racing out to a 4-0 lead.

The West Australian broke Kanepi in her opening two service games, with the Estonian finding her powerful groundstrokes nullified by her lower-ranked opponent.

Kanepi got on the scoreboard when she held serve in the fifth and seventh games, but the damage had been done.

Inglis confidently won her next two service games to claim the first set in 31 minutes.

As Inglis walked to her chair at the end of the set, she noticeably took a deep breath as if the enormity of what she was trying to achieve may have started hitting home.

Perhaps it did, as she lost her momentum in the second set, failing to win any of her four service games.

She did break twice, but Kanepi levelled the match to force a deciding set.

Inglis again struggled with her serve in the third set, as Kanepi broke three times while denying the Australian even a single game.

Kanepi has now reached the last 16 in Melbourne for the fourth time in her career.

In other results, Romanian two-time major winner and former world number one Simona Halep wasted little time in ending the tournament of Montenegro’s Danka Kovinić with a 6-2, 6-1 victory.

Cornet made it through to the Australian Open fourth round for the first time since 2009 after battling past Slovenian 29th seed Tamara Zidanšek 4-6, 6-4, 6-2.

Investors stream out of Netflix