Wilfried Zaha sees ‘even more to come’ for Crystal Palace 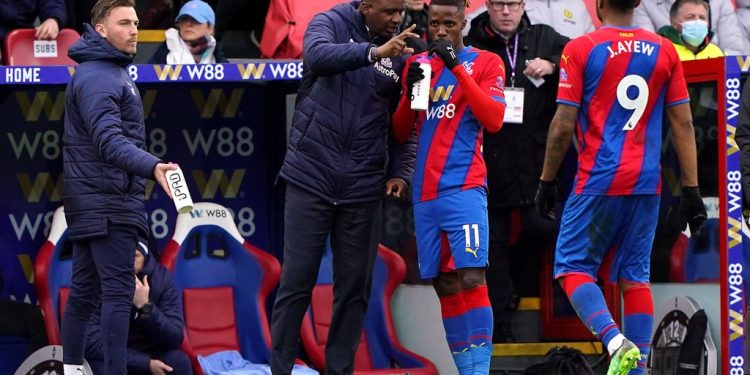 Wilfried Zaha is excited about Crystal Palace’s future under boss Patrick Vieira after they booked a ticket to Wembley on Sunday.

A comprehensive 4-0 win over Everton in the FA Cup quarter-finals continued the Eagles’ fine debut campaign under their new manager.

Vieira has kept Palace comfortably away from the relegation zone all season, despite a summer of upheaval, and now has a date at Wembley to look forward to after goals by Marc Guehi, Jean-Philippe Mateta, Zaha and Will Hughes extended their unbeaten run to six games.

“We’re looking forward to it,” Zaha told ITV when asked about the prospect of an FA Cup semi-final at the national stadium.

“It’s amazing. Obviously it’s crazy it is the first year the team have played together, but you can see the progress already. I think over time when the team gels together more there is even more to come.

“This shows what direction the club are going in. The players we have brought in, how we play, it just shows what we have got for the future so the club is going in a good direction.”

Zaha’s comments will be welcomed by everyone associated at Palace, especially as he approaches the final 12 months of his contract.

The Ivory Coast international assisted Mateta and grabbed his 10th goal of the campaign in the win, the third time he has reached double figures in a season.

Boss Vieira has often talked up Zaha’s contribution off the ball and did similar regarding the recalled Ebere Eze, who made only his fourth start of the season in the cup success following his recovery from a serious Achilles injury last May.

“Ebs has been training really well and was waiting for that kind of opportunity to play,” the Palace manager explained.

“Unfortunately he didn’t play very much but it is just because the players in the midfield were doing really well. He has still kept working hard, been working well and that was his opportunity.

“I think he did really well. He played with a lot of personality and what I was pleased about with his performance was the work he did out of possession.

“We all know what he can do with the ball but that part of the game (without the ball) he needed to improve. I think he did it really well and now that has to be consistent. The best way for him to be consistent is to keep playing games.”

Everton lost for a fifth time in seven matches and new boss Frank Lampard quickly turned his attention to helping the club avoid a first ever relegation from the Premier League.

The Merseyside outfit go into the international break only three points above the bottom three.

“The job is to stay up, that’s the reality of it,” Lampard admitted.

“If you offer any Evertonian before the game ‘do you want to win and get to Wembley or stay up?’ we know what the answer is.

“Maybe it is not Everton’s time, or not my time as Everton manager to be there at Wembley.

“Crystal Palace have been together for a while with the manager since the start of the season and have invested in important areas of their squad and team where they knew they had to, so it is their time and not ours.”

Simon Rex: A British Tabloid PAID ME to Say That I Banged Meghan Markle!