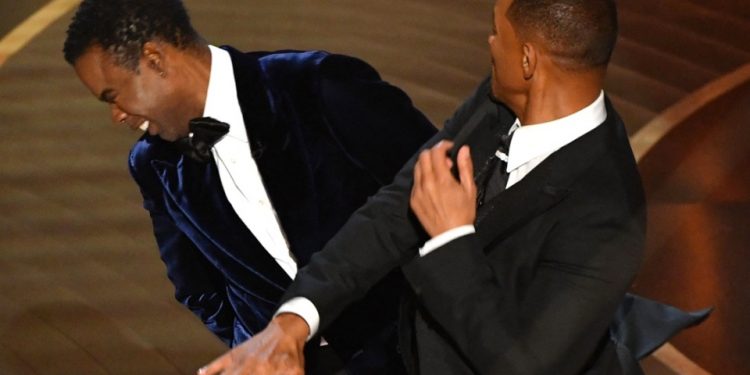 Will Smith was asked to leave Monday’s Oscars ceremony after he slapped Chris Rock, but refused, according to a statement released by Academy Awards organisers.

The Academy of Motion Picture Arts and Sciences said it has begun disciplinary proceedings against Smith over the assault on Rock in a statement released Thursday.

“Things unfolded in a way we could not have anticipated,” the Academy said.

“While we would like to clarify that Mr Smith was asked to leave the ceremony and refused, we also recognise we could have handled the situation differently,” it added.

The Academy’s bombshell statement came as Rock made his first public comments on the incident on Thursday.

“I’m still processing what happened,” he told an audience at a comedy gig in Boston.

One audience member said later that Rock had said he would probably talk about the slap at some point, but had already written his jokes for the gig.

Ticket sales for Rock’s comedy tour have surged following the shocking incident during this week’s Oscars broadcast – watched by millions around the world.

It came just after Rock made a joke about Smith’s wife Jada Pinkett-Smith’s shaved head. He referred to the 1997 film GI Janein which Demi Moore played the title role with a severe buzzcut.

Pinkett-Smith rolled her eyes at Rock’s quip. Smith appeared to initially laugh, before he marched onto stage and confronted Rock, delivering the shocking slap.

A stunned Rock said at the time: “That was the greatest night in the history of television.”

The academy’s board of governors met on Thursday to initiate disciplinary proceedings against Smith for violating the group’s standards of conduct.

The board said Smith had the opportunity to defend himself in a written response before the board met again on April 18.

Disciplinary action for Smith could include suspension, expulsion or other sanctions. There is also the possibility Smith could be stripped of the Oscar for best actor that he won just minutes after the on-stage incident – although that is considered unlikely.

The Academy has already condemned Smith’s assault. But it used stronger language on Thursday.

“Mr Smith’s actions at the 94th Oscars were a deeply shocking, traumatic event to witness in-person and on television,” the academy said.

“Mr Rock, we apologise to you for what you experienced on our stage and thank you for your resilience in that moment. We also apologise to our nominees, guests and viewers for what transpired during what should have been a celebratory event.”

On Monday, Smith issued an apology to Rock, the academy and to viewers via Instagram, saying: “I was out of line and I was wrong.”