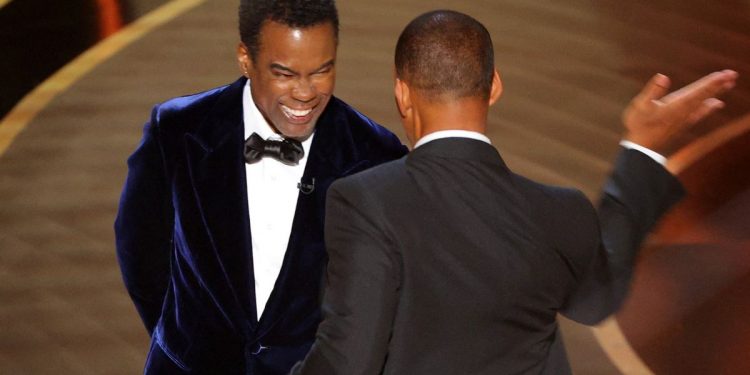 
Will Smith has issued a public apology to Chris Rock after slapping the comedian at the Oscars on Sunday.

Will, 53, took offence after the 57-year-old comedian took aim at wife Jada Pinkett-Smith, but insists violence is “poisonous” as he admits he is embarrassed by his behaviour.

Taking to Instagram almost 24 hours after he stormed the stage to smack the presenter for his GI Jane joke towards his wife, Will admitted his actions were inexcusable.

Jada announced last year that she suffers from alopecia and Chris appeared to take aim at the condition.

In the statement, Will said: “Violence in all of its forms is poisonous and destructive.

“My behavior at last night’s Academy Awards was unacceptable and inexcusable. Jokes a my expense are a part of the job, but a joke about Jada’s medical condition was too much for me to bear and I reacted emotionally.”

He continued: “I would like to publicly apologize to you, Chris. I was out of line and I was wrong. I am embarrassed and my actions were not indicative of the man I want to be.

“There is no place for violence in a world of love and kindness.”

The King Richard star, who won the Oscar for Best Actor for his role in the movie went on to apologise to several others too.

He added: “I would also like to apologize to the Academy, the producers of the show, all the attendees and everyone watching around the world.

“I would like to apologize to the Williams Family and my King Richard Family. I deeply regret that my behavior has stained what has been an otherwise gorgeous journey for all of us.”

Will concluded by insisting he is “a work in progress”.

Oscars organisers condemned Will’s actions and revealed they would be holding in internal review into the chaos.

Their statement read: “The Academy condemns the actions of Mr. Smith at last night’s show. We have officially started a formal review around the incident and will explore further action and consequences in accordance with our Bylaws, Standards of Conduct and California law.”

The statement released by AMPAS follows a late night tweet after the altercation, in which they posted: “The Academy does not condone violence of any form.”

Stars from around the world have been letting their thoughts be known around the situation in the hours that followed.

Serena Williams, the daughter of the man Will portrayed in King Richard, admitted she was shocked at what happened.

Meanwhile, Piers Morgan appeared to be one of the few to defend Will and wrote in The Sun: He was standing up for his wife, the woman from whom he blew off the dust when she was going through a rough time, and said he was going to make shine, and created a safe space for her to get healthy and to grow and define herself.”

British boxer Anthony Joshua also said he was “proud” of Will but joked he should have closed his fist.

Will isn’t likely to face any official charges after it was revealed Chris declined to file a police report.