Will Smith resigns from the academy amid Oscars slap fallout 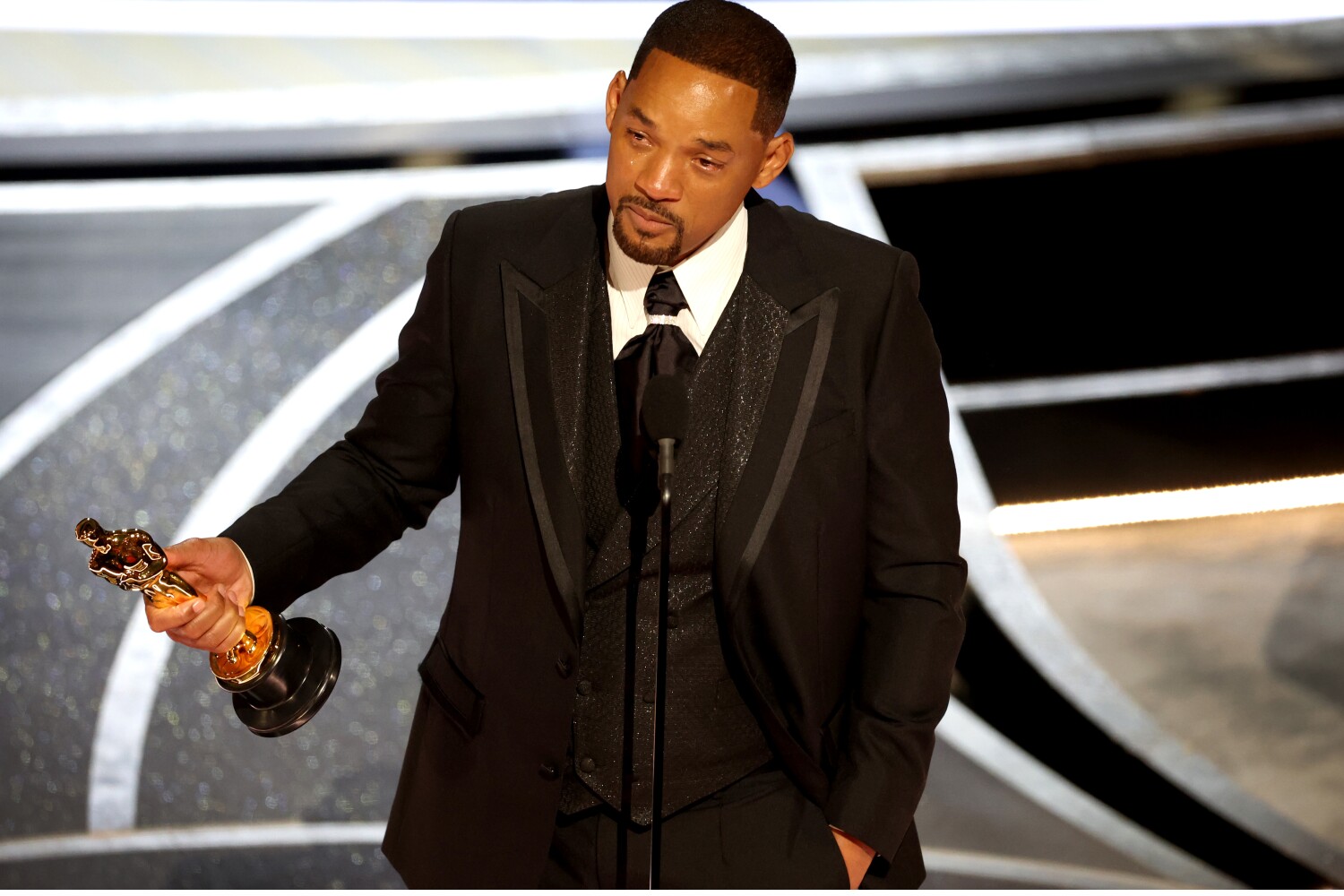 Five days after actor Will Smith slapped presenter Chris Rock during the live Oscars telecast, the unscripted drama that has consumed Hollywood sped toward its denouement, when Smith announced his resignation from the Academy of Motion Picture Arts and Sciences.

In Friday’s resignation letter, obtained by The Times, Smith apologized not only to Rock but to other Academy Award nominees and winners.

“The list of those I have hurt is long and includes Chris, his family, many of my dear friends and loved ones, all those in attendance, and global audiences at home,” the statement said. “I betrayed the trust of the Academy. I deprived other nominees and winners of their opportunity to celebrate and be celebrated for their extraordinary work. I am heartbroken.”

Academy President David Rubin confirmed that Smith’s resignation had been accepted. In a brief statement Friday, Rubin added: “We will continue to move forward with our disciplinary proceedings against Mr. Smith for violations of the Academy’s Standards of Conduct, in advance of our next scheduled board meeting on April 18.”

Smith’s exit from the organization comes amid a firestorm over the “slap heard ’round the world,” which occurred when the heavily favored nominee strode onstage and hit Rock in the face after the comedian made a joke about Smith’s wife, actor Jada Pinkett Smith.

Less than an hour later, a tearful Smith returned to the stage to collect his first Oscar, for his portrayal of Richard Williams, father of tennis champions Serena and Venus Williams, in the biographical drama “King Richard.” While some academy members and TV viewers wondered why Smith was allowed to remain in the Dolby Theatre after the slap, the actor delivered a six-minute speech in which he apologized to the academy and to fellow nominees but not to Rock. After the ceremony, Smith was seen with his family at the Vanity Fair party, Oscar in hand.

The incident and the handling of it by Rubin, academy Chief Executive Dawn Hudson and show producer Will Packer drew outrage in Hollywood and beyond. Oscars co-host Wanda Sykes criticized the academy for not taking stronger action, calling the decision to allow Smith to remain in the Dolby “gross” and “the wrong message.” Co-host Amy Schumer took to Instagram with her feelings: “I’m still in shock and stunned and sad. … Waiting for this sickening feeling to go away from what we all witnessed.”

Conflicting reports in industry and celebrity news websites, citing anonymous sources, created confusion over whether Smith had been formally asked to leave and whether he refused — turning up the heat on the decision-makers behind the scenes.

On Friday, Packer appeared on ABC’s “Good Morning America” and said that Los Angeles police had been prepared to arrest Smith on Sunday night, but Rock declined to press charges. Packer said he had been told that Smith was going to be physically removed from the show.

“I immediately went to the academy leadership that was on site,” Packer said in the “GMA” interview, “and I said Chris Rock doesn’t want that. I said Rock has made it clear that he does not want to make a bad situation worse.”

Rock alluded to the slap this week during his comedy show in Boston, where he received a standing ovation and told the crowd, “I’m still kind of processing what happened.”

But Rock has not escaped scrutiny, as the joke that triggered Smith’s slap was perceived by Pinkett Smith as a dig at her alopecia, a condition that causes hair loss. Additionally, Joseph Patel, a producer of “Summer of Soul,” slammed Rock for insulting him and mischaracterizing him as one of “four white guys” to win the documentary feature award. (Patel is Indian American.) In a since-deleted Twitter thread, Patel said Rock and Smith ruined what should have been a celebratory night.

By resigning from the academy, Smith will no longer be among the 9,000-plus members who vote for the Oscars. He will still be eligible to be nominated in future years, although the organization could strip him of that right as part of its forthcoming disciplinary actions.

With his statement Friday, Smith reiterated themes from the apology he issued Monday to Rock, Oscars producers, the show audience, the Williams family and “my ‘King Richard’ family.”

“Violence in all of its forms is poisonous and destructive,” he said. “My behavior at last night’s Academy Awards was unacceptable and inexcusable.”

In the resignation, Smith added: “I want to put the focus back on those who deserve attention for their achievements and allow the Academy to get back to the incredible work it does to support creativity and artistry in film. Change takes time and I am committed to doing the work to ensure that I never again allow violence to overtake reason.”

ARM vs. Fixed-Rate Mortgages Which Is Better For Cash Flow?

Simon Thomas has announced the...

Factors To Consider When Choosing A Japanese Sword

There are several types of...

M People slam Liz Truss for using Moving On Up – ‘Our song isn’t a soundtrack to lies!’ | Music | Entertainment

Over the years politicians have...