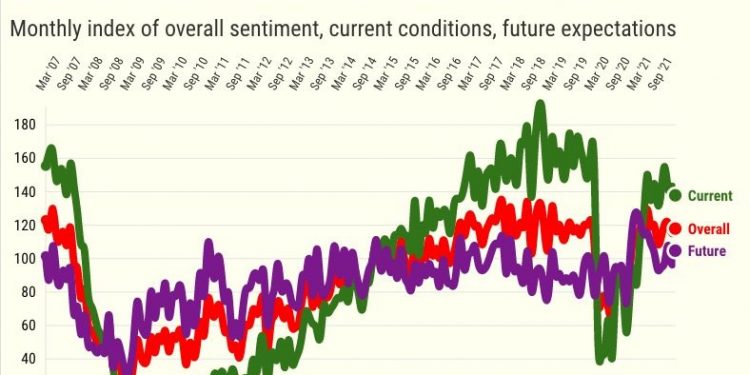 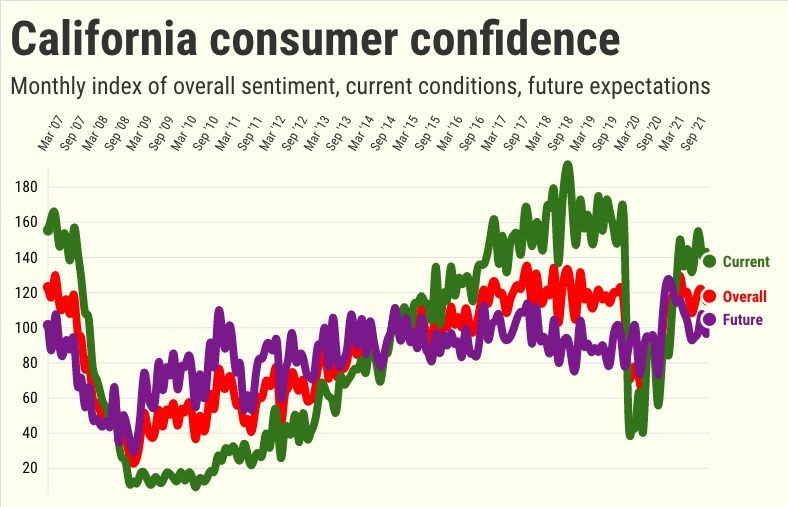 “Bubble Watch” digs into trends that may indicate economic and/or housing market troubles ahead.

Buzz: California consumers were seemingly upbeat in early February, according to one poll. Of course, you must note the survey was taken before Ukraine became a war zone.

Let’s first look at overall statewide confidence. This index was 117.7 in February, up from a revised 115 a month earlier and up from 110.3 a year ago.

That’s a 2% one-month gain and a 7% gain over 12 months. And California’s confidence is above the average 113 for the five years before the pandemic.

So overall, Californians are as happy as before the coronavirus struck — and before Russia invaded Ukraine.

Now let’s look at two measures inside the statewide index …

California consumers’ view of current conditions: Declining, with the index at 137.6 for the month — down from 142.9 a month earlier and above 94 a year earlier. Has optimism peaked? This measure averaged 141 in 2015-19. It seems Californians were modestly unenthusiastic about February.

Shoppers outlook: Upbeat, with the index at 104.5 for the month — up from 96.5 the previous month but down from 121.2 a year earlier. This measure averaged 94 in 2015-19. This above-average optimism will be tested by the Russia-Ukraine conflict.

The Conference Board tracks the nation and seven other states — Texas, New York, Florida, Illinois, Pennsylvania, Ohio and Michigan. How did California compare?

Overall confidence: Three increases among the seven states in a month; all seven were up over the year. National: Down for the month; higher over 12 months.

Current conditions: One increase in a month; all seven up over the year. National: up for the month; higher over 12 months.

Outlook: Four increases in a month; two up over the year. National: down for the month; lower over 12 months.

Arch-rivals? Texas’ overall confidence fell 4% in the month but increased 17% in the year. Florida saw a 6% one-month drop and an 18%, 12-month advance.

And then there’s the latest unnerving trend — inflation. People polled expect the cost of living to be 7% higher in a year, up from 6.8% the month before and up from 6.5% a year earlier.

On a scale of zero bubbles (no bubble here) to five bubbles (five-alarm warning) … ONE BUBBLE!

Now add the geopolitical challenges of Ukraine to a California mindset, which seems ready to embrace to a post-pandemic economy.

Jonathan Lansner is the business columnist for the Southern California News Group. He can be reached at jlansner@scng.com

Why This Stoicism Self-Help Book Works