Despite the Biden administration’s celebration of 100 million Americans fully vaccinated against COVID-19, the U.S. may never reach the ultimate goal of herd immunity because 20 percent of Americans don’t want the shots and variants have pushed the immunity threshold above 70 percent of the population.

As of Monday, 31.6 percent of Americans are inoculated against coronavirus. As vaccinations rise, daily infections are beginning to fall off, with the average number of daily cases declining nearly 15 percent to fewer than 50,000 a day in the past week.

The seven-day rolling average of daily infections is now the lowest it’s been since October 10. Likely as a result of the rising vaccinations and falling caseload, daily deaths have fallen to fewer than 700 on average, holding steady there for the past week.

But stalling vaccinations threaten to reverse that progress. Daily shots have plummeted to an average of fewer than 2.5 million a day, down from the peak of nearly 3.2 million on April 11.

Herd immunity was once estimated to be around 70 percent, but with the emergence of more in infectious variants – including the now-dominant B117 variant first identified in the UK – the needle has likely moved, experts told the New York Times.

Now, north of 80 percent of Americans would likely need to be vaccinated against the virus to prevent resurgences.

That simply may not be possible, considering that between 20 and 30 percent of Americans are still vaccine hesitant.

‘It is theoretically possible that we could get to about 90 percent vaccination coverage, but not super likely, I would say,’ Dr Marc Lipsitch, Harvard T.H. Chan School of Public Health epidemiologist, told the Times.

Wyoming has the highest rate of vaccine hesitancy in the country, with an estimated 32 percent of people saying they won’t get the shots in at least 11 of the state’s 23 counties.

The state also has the fourth lowest rate of vaccination, with 34.1 percent of its population having had one or more doses of Covid vaccines, and 28 percent fully vaccinated. Daily cases in Wyoming are holding steady at about 60 a day.

Mississippi lags furthest behind, with 31.1 percent of residents having had one or more doses and just 23.8 percent fully vaccinated.  The prospects of its vaccination campaign look poor as well, as 30 percent of people in six of its counties are hesitant to get vaccinated.

Herd immunity may be especially hard to reach in these states, and hotspots for vaccine hesitancy could be the Achilles heel that allows coronavirus to continue to resurge, if the U.S. doesn’t adopt a strategy to quickly quell emerging outbreaks.

About 20% of Americans are vaccine hesitant, with rates rising above 30% (dark blue) in parts of Mississippi, Wyoming and North Dakota. With the spread of variants, experts think the 80% of more of Americans need to be vaccinated to reach herd immunity – and that level may be impossible 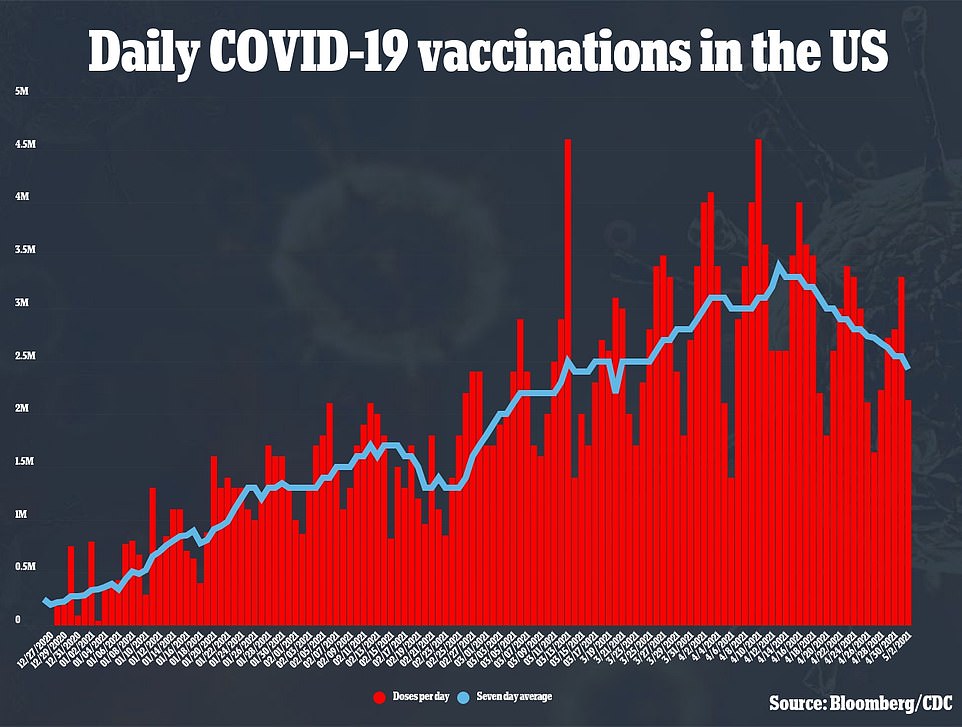 So does the U.S. need to reach herd immunity, or should we be content to have Covid stay with us as a milder seasonal virus?

That depends on who you ask and what metrics you choose.

‘We accept this and decide we’re not going to wear masks and [many decide they] are not going to get a vaccine,’ Mayo Clinic vaccinologist Dr Gregory Poland told DailyMail.com in a recent interview.

Dr Poland speculates that many Americans think, ‘”Why should I get a vaccine? I’m not going to die.” No, but you are going to pass it on to to somebody who is going to get sick and die.

‘But the answer in America is, “I’m not going to get sick and die.” As [political satirist Walt Kelly said in his comic] Pogo, “We have met the enemy, and he is us.”‘

In Dr Poland’s estimation, then, Americans’ behavior suggests they don’t think herd immunity is necessary, because most believe that the continued burden of Covid won’t kill them.

That may be changing with the rising prevalence of variants, which seem more adept at infecting younger people, and making them sick.

What’s more, vaccine hesitancy and vulnerability to becoming severely ill or dying from COVID-19 vary wildly across the massive U.S.

That suggests that two strategies may have to shift.

Rather than eradicating coronavirus altogether, the U.S. may have to adjust its aim to keeping hospitalizations and deaths to a minimum.

So far, high-level health officials like the White House Covid Response Team have said little to brace Americans for this possibility, focusing instead on elimination of the disease.

‘And with 100 million Americans fully vaccinated as of today, we continue to move ahead in our progress to end this pandemic.’

But ‘ending’ the pandemic may really look more like downgrading coronavirus to a seasonal, endemic virus, much like flu.

Some years are worse than others, but the flu season – between about October and march – is generally busier than periods for hospitals, but rarely overwhelming.

The last flu season was a notable exception. Increased hand-washing and mask-wearing are credited for all but eliminating flu in the U.S. during the 2020-2021 season. 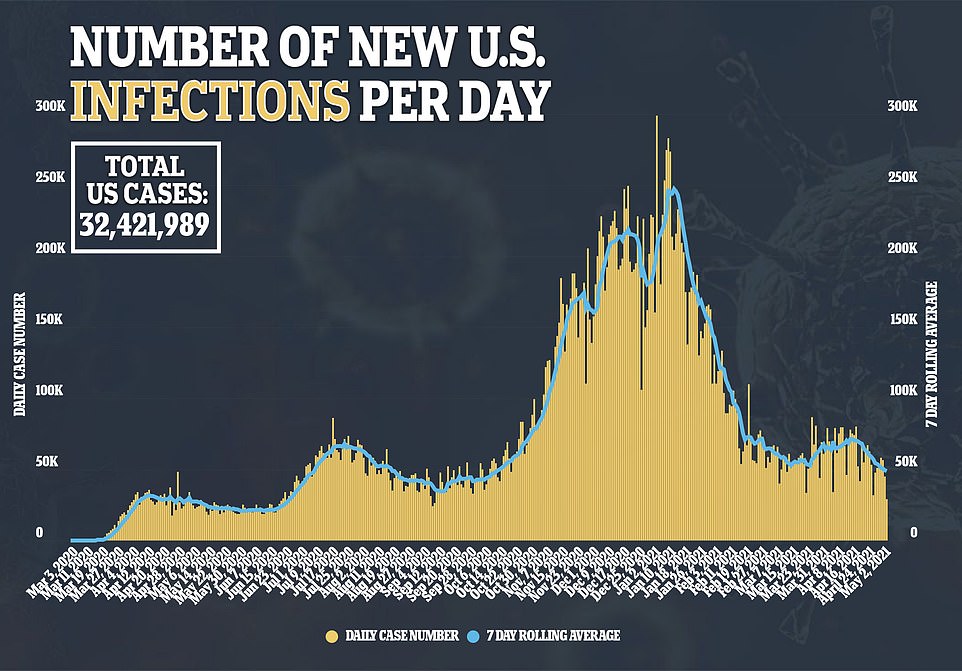 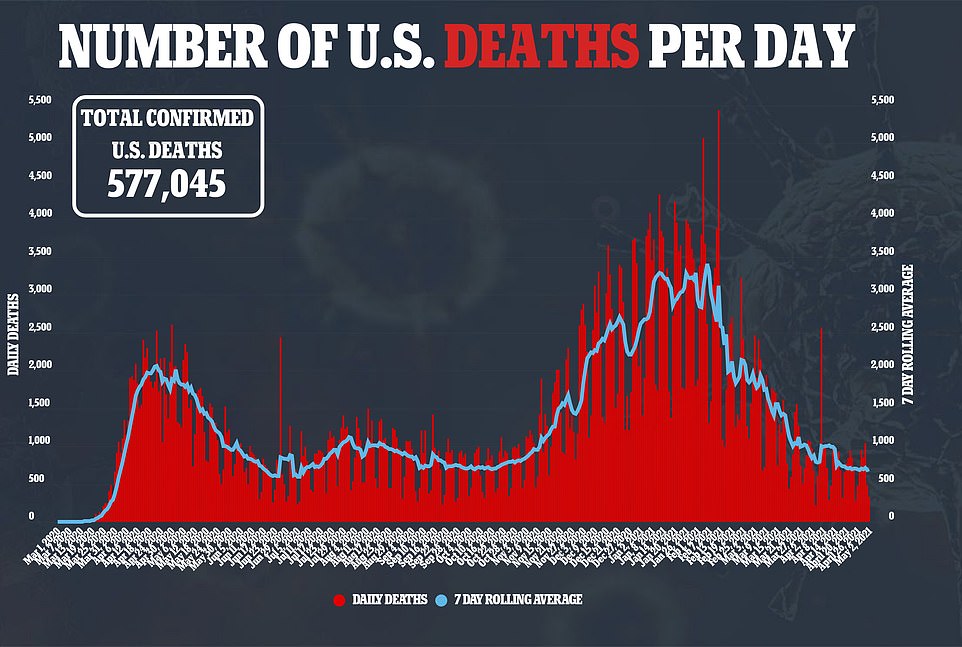 But even the worst flu season paled in comparison to the COVID-19 pandemic. There have been 2.1 million hospital admissions for COVID-19 since August 1, 2020, according to data from the CDC.

So if 70 percent of the population had been vaccinated, the 2.1 million hospitalizations seen since August likely would have been reduced to fewer than 600,000.

That would be the equivalent of hospitalizations seen in a moderately bad flu season.

Ensuring that COVID-19 cases, most of which involve only mild or asymptomatic illness, don’t translate into hospitalizations and deaths, could be the critical metric.

The challenge is that reaching ‘herd immunity’ across the nation, all at once, may be exceedingly difficult, if not impossible.

‘If I could wave a magic wand and right now 85 percent of people could have immunity and retain immunity, problem solved, but that’s not going to happen.’

Instead, the level of herd immunity will vary with place and time. 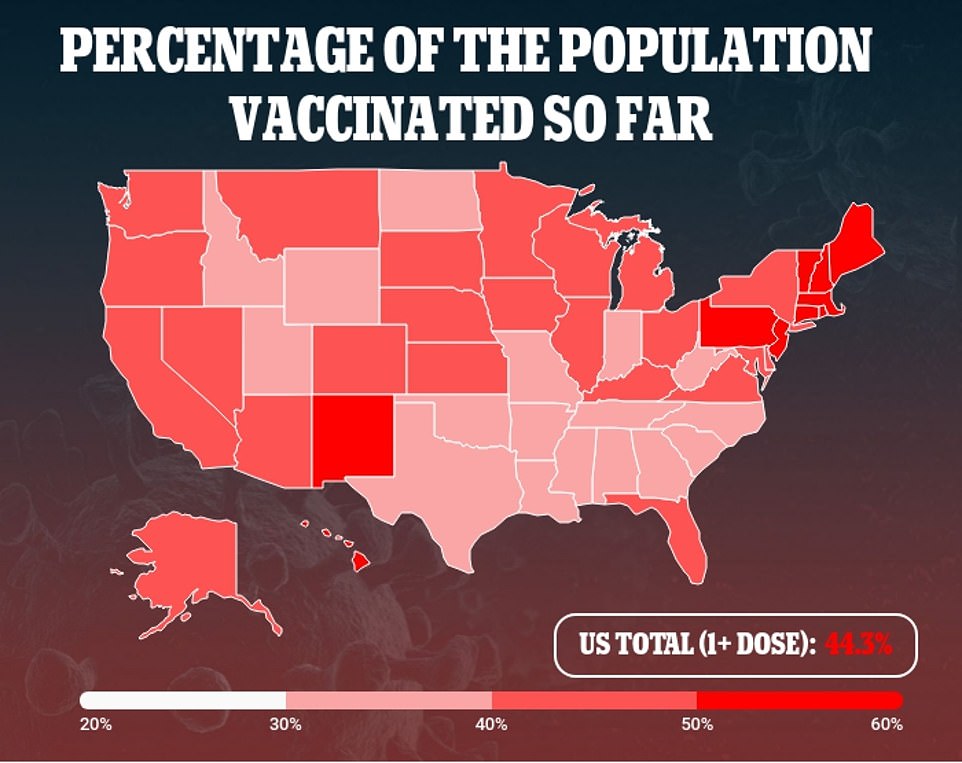 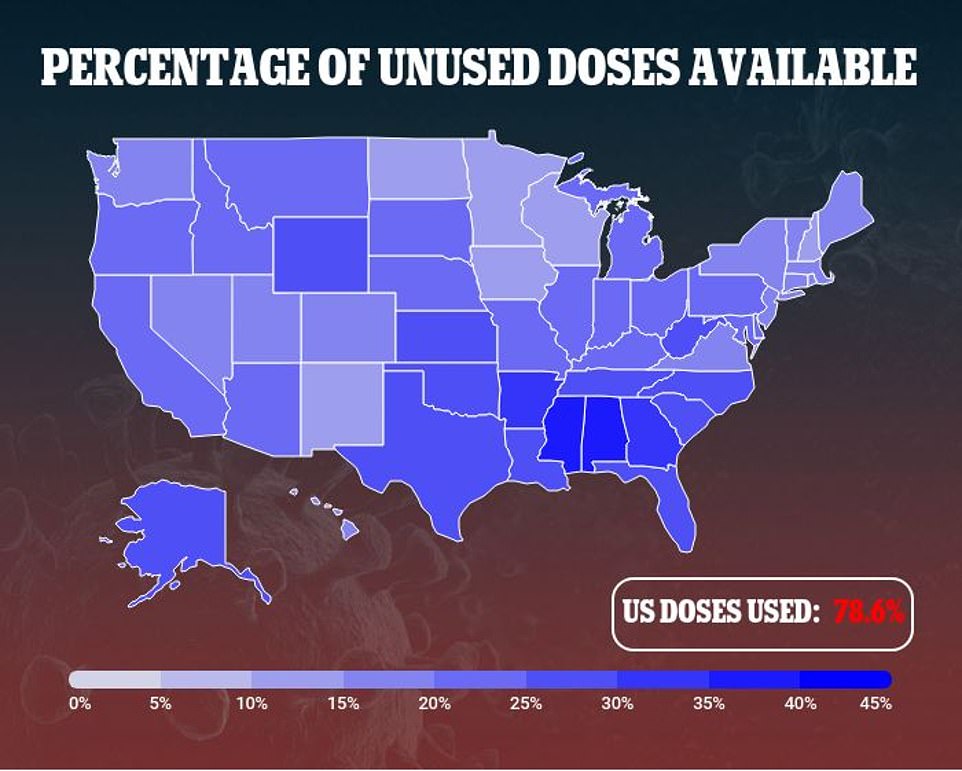 Already, Moderna has said it anticipates people will need a booster shot within a year as their immunity wanes.

And while 90 percent of one city, county, or state might get vaccinated within a period of a few months, another may never have nearly that much of its population immune.

‘Disease transmission is local. If the coverage is 95 percent in the United States as a whole, but 70 percent in some small town, the virus doesn’t care. It will make its way around the small town,’ Dr Lipsitch told the Times.

President Biden’s coronavirus advisers have hinted that they may soon begin to shift their vaccination campaign focus from broad to targeted, seeking to boost vaccinations in areas with low rates due to hesitancy or poor access.

That may mean identifying areas where two factors overlap: High rates of hesitancy and high rates of what the CDC calls ‘social vulnerability.’

Areas of high social vulnerability are more likely to have large populations who are minorities, economically insecure, may not have stable housing, whose don’t speak English as a first language and other factors linked to poorer outcomes from COVID-19.

CDC data shows that these two issues overlap in some parts of the U.S. – namely, the South.

The highest rates of vaccine hesitancy in the U.S. are estimated to be in Wyoming and North Dakota, in counties where 31 to 32 percent of people are unlikely to get the shots, according to the CDC’s data from the end of March.

However, the risk of being hospitalized for or dying of COVID-19 is probably lower in these counties, because they score lower on the agency’s social vulnerability index.

Of course, social vulnerability factors aren’t the only ones that determine poor Covid outcomes, but they tend to be fairly predictive.

In six Mississippi counties, an estimated 30 percent of people are vaccine hesitant.

And the state has a high proportion of counties that rank high for social vulnerability, too.

Bolivar County, for example, scores a 0.97 (out of 1) for social vulnerability, and yet 30 percent of people there are hesitant to get vaccinated. 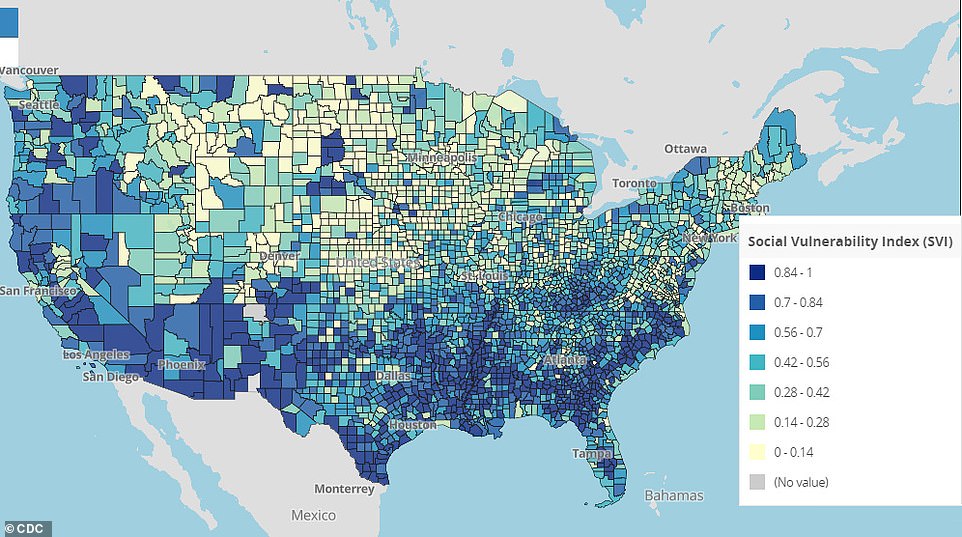 Some of the highest rates of social vulnerability (blue) for poor COVID-19 outcomes are in the South, including in Mississippi counties where 30% of people are estimated to be vaccine hesitant

Pockets like Bolivar could be devastated by coronavirus if it resurged, and even set off additional outbreaks – a risk that Dr Poland says could actually rise as daily infections fall following the initial burst of vaccinations.

‘Here’s what has happened and my prediction of what will happen: Every time we see a dip in cases, states’ governors are going to relax restrictions,’ he said.

‘Every time we’ve done that we’ve had a surge.’

Mississippi was among the first states to lift its mask mandate and virtually all restrictions to slow the spread of coronavirus, announced on March 2.

The state saw a brief spike in new cases, but they’ve since leveled off at around 200 a day. 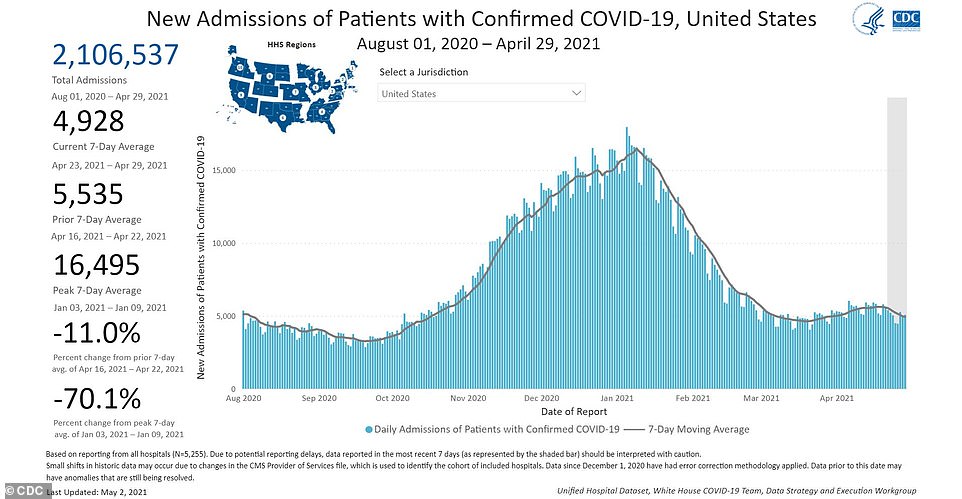 There have been 2.1 million hospital admissions for COVID-19 since August 1, 2020, and the U.S. is still seeing nearly 5,000 new admissions a day, though the number of new inpatients has fallen 11% in the past week. Keeping hospitalizations down may be the new goal of ‘ending’ the Covid pandemic, rather than eliminating the virus altogether

So far, the state itself has not identified a high proportion of cases of Covid variants like B117, which are more infectious and could push the herd immunity threshold up further.

But in its region – inclusive of Florida, Alabama, Georgia, Kentucky, South Carolina, North Carolina and Tennessee – about two-thirds of cases are estimated to be caused by B117, according to the CDC’s tracking.

In neighboring Georgia, 64 percent of all infections are thought to be caused by B117 – exceeded only by Michigan and Minnesota, where 70 and 68 percent, respectively, of cases are due to the variant.

The variants can easily spread over state lines, especially to neighboring communities.

Public health officials will be watching closely for new hotspots to emerge and those, some experts argue, should be where the vaccination campaign’s energy is focused.

‘What we want to do at the very least is get to a point where we have just really sporadic little flare-ups,’ Dr Carl Bergstrom, an evolutionary biologist at the University of Washington, told the Times.

‘That would be a very sensible target in this country where we have an excellent vaccine and the ability to deliver it.’

If outbreaks can be contained, the virus will have less opportunity to evolve into more infectious or dangerous strains, and may someday recede to something akin to seasonal flu or, better yet, just another seasonal cold, like most coronaviruses.

It’s going to be a Lang Lang time: the ultimate self-playing Steinway

After one year of research accounts, finally the CDC updates recommendations on COVID-19 airborne transmission

Nearly half of residents have completed COVID-19 vaccination series

EVGENY LEBEDEV: Pandemic has revealed just how unhealthy Britons are

It’s going to be a Lang Lang time: the ultimate self-playing Steinway