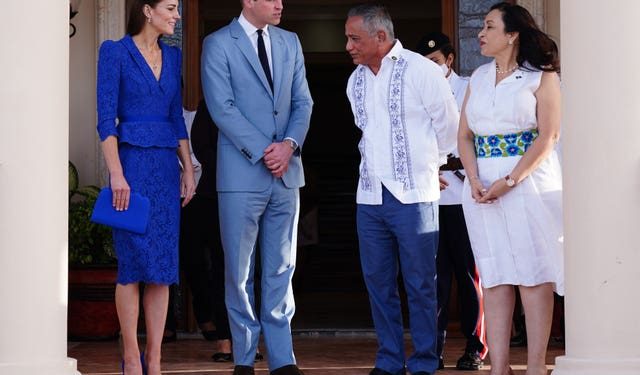 The Duke and Duchess of Cambridge will learn about efforts to preserve Belize’s barrier reef as their Caribbean tour continues.

William and Kate spent around an hour chatting with Prime Minister Johnny Briceno and his wife Rosanna after arriving on Saturday for the start of an eight-day trip to mark the Queen’s Platinum Jubilee.

The couple looked relaxed after their 11-hour long-haul trip from the UK and were welcomed by Belize’s Governor General Froyla Tzalam as they stepped from the Voyager ministerial jet.

When the Cambridges met Belize’s prime minister and his wife around an hour later, William said: “It’s lovely to be here.”

“Thanking you so much,” the Prime Minister replied, adding: “We’re so happy you’re here.”

“There were lots of questions in the car,” said Kate, laughing, and clearly referring to William.

The Prime Minister and his wife then invited Kate and William to sit in a lounge area in his office building which overlooks the ocean.

“It’s such a lovely view,” said the duchess.

The start of the tour began in controversial circumstances after opposition from villagers, who cited a range of issues including objections to the Cambridge’s helicopter landing site, forced a royal trip to a farm on Sunday to be scrapped.

It will be replaced with a similar visit that will see the couple tour a chocolate producer on Sunday and later travel to the cultural centre of the Garifuna community in Hopkins.

This beachfront village is known for its welcoming nature and will greet the couple with a demonstration of Garifuna culture.