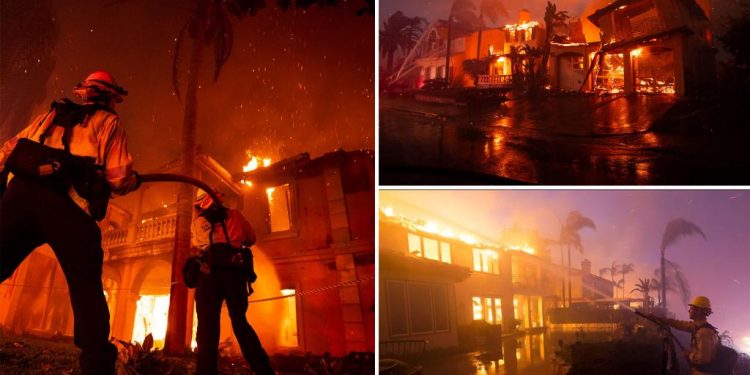 The blaze in Laguna Niguel was first reported around 2:45 p.m. and had engulfed about 200 acres by 6 p.m., authorities said at an evening press conference.

Several multi million-dollar mansions were among the residences in the ritzy neighborhood that went up in flames.

Officials reportedly declared a state of emergency in Laguna Niguel to help fight the growing fire.

Dramatic helicopter video aired by KABC-TV showed the fire climbing up a brush covered hillside overlooking the Pacific Ocean and spreading across Ocean County’s Aliso Summit Hiking Trail to palatial houses on the top of the hill.

Crews fought the blaze from above with aircrafts, dropping fire retardant and water on the smoke congested area, video showed.

Residents of the Coronado Pointe and Pacific Island Drive neighborhoods were ordered to leave their homes, while voluntary evacuations were in effect in nearby Laguna Beach, officials said.

Deputies and firefighters went from house to house to evacuate residents as a state of emergency was issued, officials said.

Twenty-five adults, two children and five pets had sought shelter at a local community center where the Red Cross was providing outreach services, according to authorities.

“We’re seeing spread in ways that we haven’t before,” Brian Fennessy, fire chief of the Orange County Fire Authority, said.

“The fire is spreading very quickly into this very dry vegetation and is taking off.”

One of the concerns for me as a fire chief obviously is the safety of my firefighters,” Fennessy added.

“There’s no structure, there’s no vegetation that is more valuable than human life or firefighter life.”

No injuries to firefighters or civilians were reported, officials said.

‘United States of Al’ Canceled By CBS After 2 Seasons – Deadline