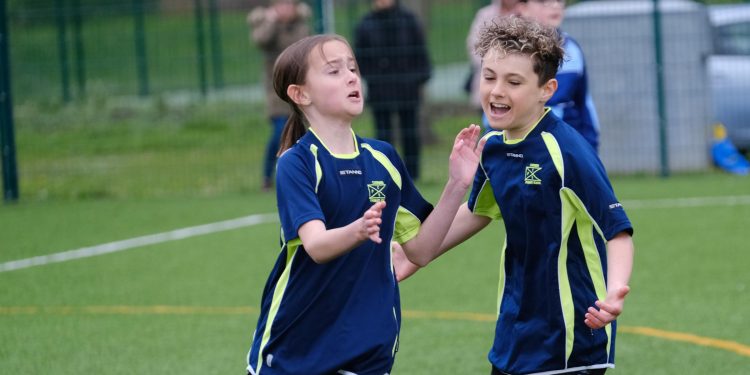 The William Duncan Community Trophy took place on the John Thomson astro turf, at Wallsgreen Park, Bowhill, and the final had a finish football fanatic Willie would have enjoyed.

The seven-a-side schools football tournament was founded in memory of a popular and long serving community stalwart, Willie Duncan, by the local John Thomson Memorial Committee.

Mixed teams from Primaries 5-7 from the four local primary schools, of Kinglassie, St Ninian’s, Cardenden and Denend, took part. Spectators were treated to a morning of exciting football from all sides.

Kinglassie and Cardenden played a great final, ending with a score of 2-2, with the Kinglassie side equalising in the last seconds. It was on to a penalty-out with Cardenden Primary School securing a narrow victory.

Trophies were awarded to every player for their participation and special trophies awarded to the best player from each school. These were Ethan Pate (Cardenden PS), Keiran Hodge (Denend), Marco Marini (St Ninian’s) and Riley Harris (Kinglassie).

Presentations were made by local councillor and chair of Cowdenbeath Area Committee, Linda Erskine; and Councillor Rosemary Liewald, vice chair. The committee would like to thank them for their support.

Thanks also went to the Corrie Centre staff for their support; Margaret King at Bowhill Centre; Fife Sport and Leisure Trust; and Fife Active Schools, for their assistance, and to local parents for attending on the day.

Special thanks to Kevin McGuiness, the tournament referee, and St Andrew’s Ambulance Association volunteers for giving their time and assistance.

And a very special thanks went to Christopher Duncan, grandson of Willie, for attending the event.

Lifetime friend of Willie Duncan, Alex Burns said: “The day could not have gone better.

“The young footballers put on a tremendous performance and thoroughly entertained the good crowd.

“Willie would have been proud of their efforts and skills, and it was a fitting memorial for someone who spent so many years helping organise community events such as Bowhill Village Fair, the John Thomson Tournament, Bowhill Fireworks Display and Bonfire, and the Willie Maley and Willie Johnston football tournaments.

“This will be an annual tournament and the committee look forward to welcoming everyone again next year.

“In the meantime, the committee look forward to seeing everyone at Moorside Park, Dundonald on Sunday, September 4, at Noon, for the 2022 John Thomson children’s football tournament.”